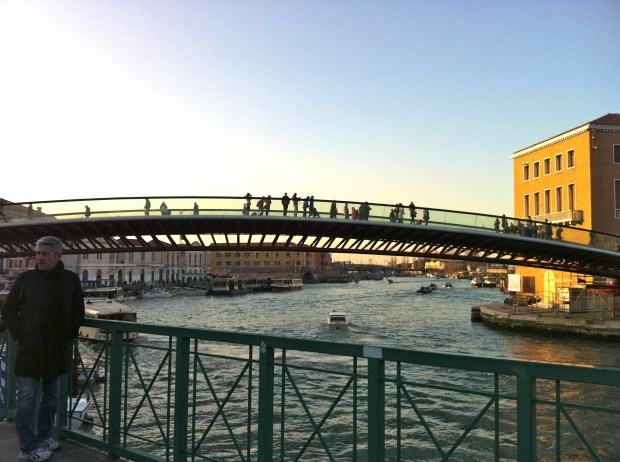 Stepping into Venice was like stepping into the frame of a beautiful picture. How long had I dreamed of coming here? How impossible and exotic it had seemed, far beyond the mundane sphere of my everyday life.

Now I was stepping over the bits of trash and confetti that dotted the damp paving stones, and for this moment, for the travelers emerging from the train station behind me, I had become part of Venice. 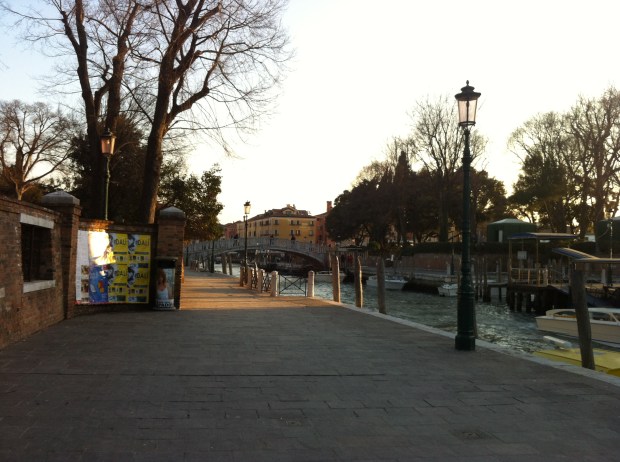 This place is unreal. The gondolas, the ancient churches, the creamy-looking canals, the smell of fresh pizza around every corner — the very notion that such a magical place actually exists, a remnant of such outrageous history and fortune, is a bit of a surprise to one who hails from such a young country. The only thing that comes close in relevance and audacity on my own turf is Disneyland. 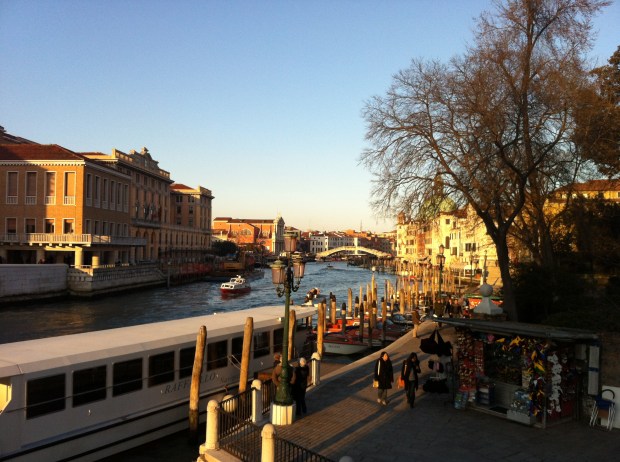 Venice is legendary for losing visitors. Along the Grand Canal, it looks simple and majestic. True, standing next to the water, you can at least state with some degree of certainty, “I am here.” But a few minutes’ walk into the interior, and you are certain of nothing. Maps only serve to confuse and confound.

I had read enough references regarding the difficulty of navigating in Venice to expect that we would get lost…and rather quickly. I was not disappointed. I was actually looking forward to it. The thing is, I love being lost. I think being lost is a huge part of the thrill of traveling, never quite having your bearings and always on the verge of discovery. I love being lost!

Jon, on the other hand, does not like to be lost. Or perhaps he does, but just not while lugging his stupid sister’s ginormous luggage back and forth over countless staired bridges as the sun is beginning to set. (In my defense, I packed it half-full and threw my computer bag in for ease of convenience…ahem…while traveling.) 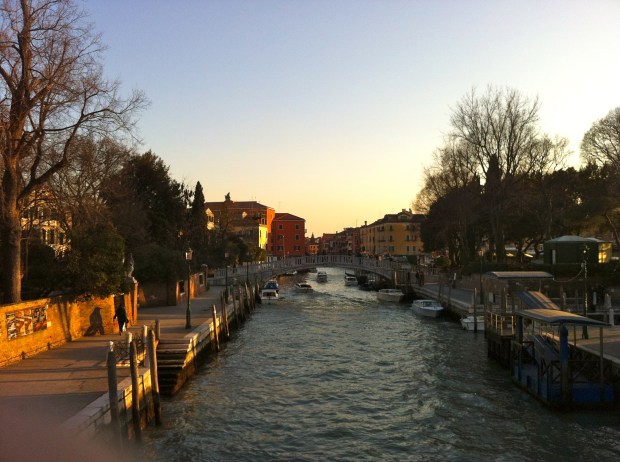 Pardon the finger…that happens sometimes…okay, a lot. It happens a lot.

According to the owner of the apartment we were renting, it was only a 17-minute walk from the train station to the flat. Along with the directions was a photocopied map with our destination highlighted in red ink. It seemed pretty straightforward:

“As you step off the bridge across the canal, turn sharply left and walk straight with the water on your left.” Easy-peasy.

“You will cross two or three bridges.” Uh-oh.

“If you need directions, ask for ‘Campo Santa Margherita.’ That is not your destination, but it will move you toward the house.” Um…mi scusi, signor? Per favore…?

The light was fading fast, and we soon found ourselves hopelessly lost in a quadrangle of tiny corridors with people appearing and disappearing left and right, some clearly knowing what they were about, and the rest clearly as forsaken as we were.

My brother, having taken on the heroic task of hauling around my luggage (so sorry, bro), was concerned over the loss of daylight. I was a little more concerned over the fact that we had somehow lost the map the apartment owner had marked for us. Dang.

Somewhere in our wanderings of the wrong neighborhood, criss-crossing back and forth in front of the same old church — it’s following us! — Jon curled up in a darkened corner, no longer able to form full sentences. “So cold…so dark…what the hell did you pack in this suitcase?!…whimper…mumble…get a friggin’ taxi already!”

As we retraced our steps back to the train station in search of a water taxi, I must confess I was happily lost. I had no doubt we’d eventually find our way. Of course, I was hauling about 10 pounds of luggage versus Jon’s 60-plus. Even still, I was just excited to be here! After months of writing about characters wandering lost in Venice, here I was…lost as fuck. It was exciting.

I wisely kept my mouth shut at this point, however, as my brother seemed less inclined to joy over being lost as he hauled my suitcase back over the two or three bridges to a water taxi station. There, we made the acquaintance of Marco, who was too nice to charge us the €50 it would cost to take us to our apartment. He looked at the address. “This is Dorsoduro! Only 10 minutes away!” he said, as he marked another map for us.

I could see the hope fading from my brother’s eyes. 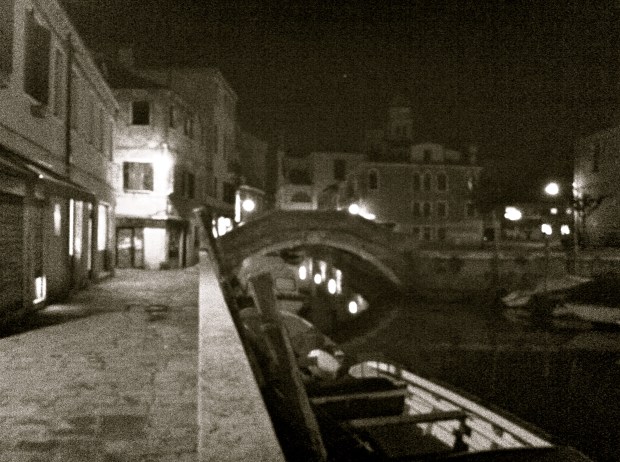 Night fell quickly, like a final curtain, and we were cast out into the labyrinth again. The shadows gathered close in Poe-like fashion, and tummies complained boldly and persistently.

But miraculously, the landscape started to match up with some of our directions… 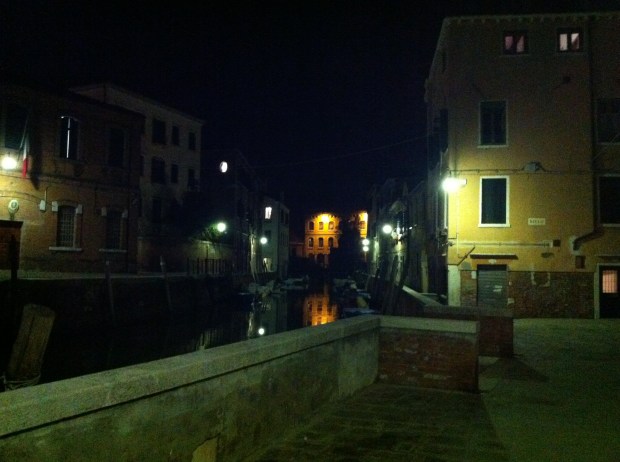 “Follow this lovely canal…enter the narrow calle and turn right as you enter the campiello. The front door is in the corner.” 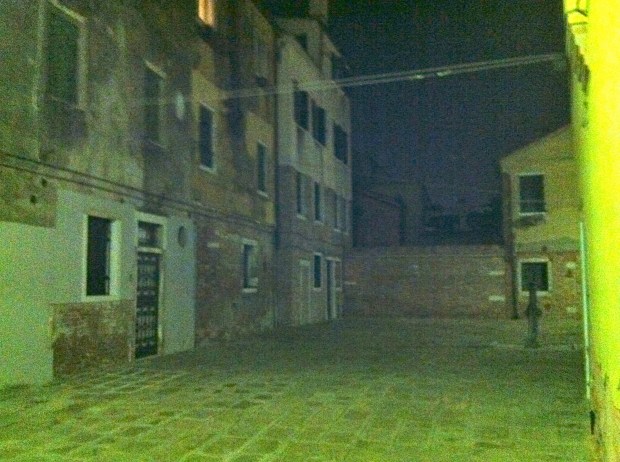 Digitally enhanced for your viewing…erm..ability. The original picture is pretty much a black square. You’re welcome.

And just like that, we were home. And it was only a two-hour walk from the train station! Win!