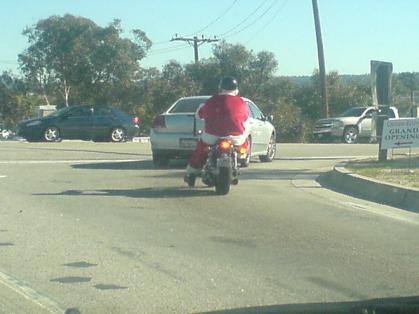 Another Christmas, another season of last-minute stress shopping (“I’m sure Dad will love this $50 nose trimmer with attached flashlight and nail clippers.”); last-minute gift wrapping (“Whaddaya mean we don’t have any wrapping paper?”); and last-minute visits (“Did I mention my dad’s expecting us in a couple of hours?”).

But as far as Christmases go, this year was pretty damn fine.  Everyone liked their last-minute doodads, presents were wrapped with brown paper bags and “Happy Birthday” paper, and we showed up everywhere we needed to be.

What made it pretty damn fine was watching my little girl experience her first Christmas.  Technically, this is her second Christmas.  Her first Christmas we watched her sleep in an incubator in the NICU department at Kaiser Hospital.  This year she got to tear up wrapping paper, crawl all over the place, and play in boxes.

Slogging my way through the novel.  It was so easy last month.  It got a little gunky midway through, but now the going’s a little easier.  I’m a bit past 67,000 words right now.  Not really where I wanted to be by now, but I think I’ll still finish by Christmas.

Just celebrated my little girl’s first birthday last weekend.  I can’t believe she’s 1 year old already.  We kept it low-key, just family.  It was nice, and she got lots of toys.  She’s been busy playing with the packaging and boxes all week.

Ventured back into the fabulous world of freelance court reporting today.  It’s been over a year since I’ve reported anything, so I’ve been busy getting my software in order, getting my equipment dusted off and charged up, and practicing on my stenotyping speed.  I feel so out of shape!  My wrists are mewing pathetically right now.  (For some reason, regular typing and stenotyping seem to use slightly different muscles.)  But my assignment went well this morning.  Like riding a bike. <g>

What else?  I’ve been developing some plans for the blog.  Nothing Earth-shattering, but I am repurposing it with the intent of bringing more consistent, frequent, and hopefully helpful posts for fellow newbie writers, as well as some humor bits.  More on that in coming days.

Other than that, just chasing the baby around.  Whew!  She’s in full Explorer mode, pulling clothes out of hampers, digging in kitchen cabinets, and turning every piece of paper she comes across into party confetti.  Considering this time last year she was in an incubator with tubes, I couldn’t be more grateful.  Life really is good. 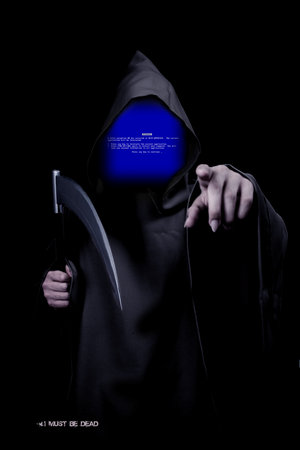 Well, it finally happened.  I spent the last two years avoiding reformatting my hard drive.  A couple of months ago, I took my laptop apart and gave it a thorough cleaning, a new squirt of thermal gunk for the processor, fished out all the crumbs from beneath the keys.  I had high hopes that all my computer needed was to be clean.

Apparently not.  And I have to confess, through most of the month of November, while caught up in the fervor that is NaNoWriMo, I was getting the Blue Screen of Death pretty regularly.  I just kept telling the computer, “Ah, no big deal, just go back to the last config settings that worked.”  That should keep working, right?

Nope.  Unmountable boot volume.  Would not, could not make the darn thing boot up from the recovery disk.

I should back up a pace here and just mention that the day that my boot volume decided to stay unmountable was on the day that my final project for my creative writing class was due, and all of my work that was to be included in my fiction portfolio was on my laptop waiting to be printed.

So I did what I had to do.  I put it out of its misery and reformatted the darn thing.  The neat thing was, I didn’t pop a vein, I didn’t curse — not once! — and I didn’t even blame my husband.

How was I able to maintain such a cool head amid such fire-stoking events?  Well, I’m glad you asked.

For the first time in my life, I had BACKED UP MY STUFF!

That’s right, folks.  A few weeks ago, sensing that perhaps I had attracted the god Murphy’s attention, I had purchased a little 4GB flash drive that attaches to my key ring.  I also had the whole shebang backed up on a large external hard drive (that took care of all the pictures, court reporter files, music, and videos).

So when it became apparent that my computer was not going to mount its boot volume for me, I calmly switched to another computer and got my homework done and printed.  And then the next morning, I trotted down to my favorite Starbucks and reformatted my hard drive while sipping a latte.  Quite surreal.

(And if it sounds like I’m bragging…well, I am.  This is the first time I’ve handled a situation like this with any amount of grace.  If ever one of my previous brushes with the Blue Screen of Death had happened to be recorded on video, I’m sure it would be on YouTube right now, garnering votes as the “Best Freakout.”) 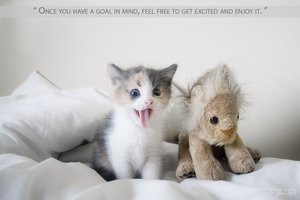 So I’m more than halfway done with the novel, I’ve got one class left in my creative writing class, and the year is coming to a close.  I’ve learned so much in the past couple months that I have to break them up into separate posts.

The first is easy enough.  I’m finishing the book I started last month.  It’s coming along.  It’s almost like a souffle.  I don’t want to say it too loud for fear I’ll deflate it.  But I’m trucking along, and I hope to finish it before Christmas.

The second one is one I’ve been talking about forever it seems.  But I will finish the revisions of my scifi novella and put together the graphic novel proposal for my brother, the fabulous artist, to read and consider.

Finally, I’d like to get a couple of new short stories written.  I was surprised at how many short stories I was able to write last month while NaNoWriMo was going on, and I want to keep up the momentum…though at some point I’ll have to start revising and submitting.

So I’ll add that in.  I will submit for publication at least two pieces.

There ya go.  Feel free to publicly flog me if I goof off and wander off track.  And I would love to hear other people’s goals.  I know you’re out there, plugging away industriously.

I’ll be posting more stuff on the creative writing process as I go along, as well as some humor pieces I’ve been working on.  Gotta change it up a bit here and there.

Anyway, pardon my brevity.  I gotta get back to the novel.  This is NaNoWriMo Part 2. <G>