Due to a satisfying dinner behind us and adventures unforeseen ahead, we needed a little din-Euro. (Get it?) So we got in line at the ATM and suffered in silence while this drunk American kid behind us strangled a great American movie quote over and over. I decided this could go on no longer.

I turned around, smiled sweetly, and said, “‘Hi! You guys want some cookies?’”

His companions busted up laughing, and Funny Boy pointed at me in delight. “That’s how you say it! Thank you!”

(Of course it is. I should know. This is my cousin’s favorite line from Corky Romano and has gotten almost as much play time as Life of Brian’s “He’s not the Messiah, he’s a very naughty boy!” But I digress….)

END_OF_DOCUMENT_TOKEN_TO_BE_REPLACED

ANYHOO…our first night in Venice turned out to be fairly abbreviated. After all the walking and being lost…then being found and being fed…it was time to find our way back to the apartment. If we could.

Clearly, we weren’t the only ones with difficulty finding our way around. There were graffiti’d messages and arrows on walls and cobblestone walkways left by other tourists helpfully pointing the way back to the train station and other Places of Import. Which is how we were able to help out this one guy who staggered up to us with a desperate look in his eye, a sloshing cup of beer in his hand:

DrunkAmericanSoldier: Hey — er, scusi! Do you know where the train station is?

Jon: Yeah, man. It’s back where you came from.

DrunkAmericanSoldier: Oh, thank God! You’re American! You speak English! Are you sure? I’ve been wandering around for hours!

Jon gave him precise directions, and the guy thanked him profusely, tilted his alcohol-swolled-up head in the direction Jon pointed, and then tried to keep up with its momentum as he tottered out of the square and disappeared into an alley.

I looked at Jon.

Me: You know where the train station is?

Me: Do you know how to get back to the apartment?

Indeed he did. And so we returned to our apartment, crashed… 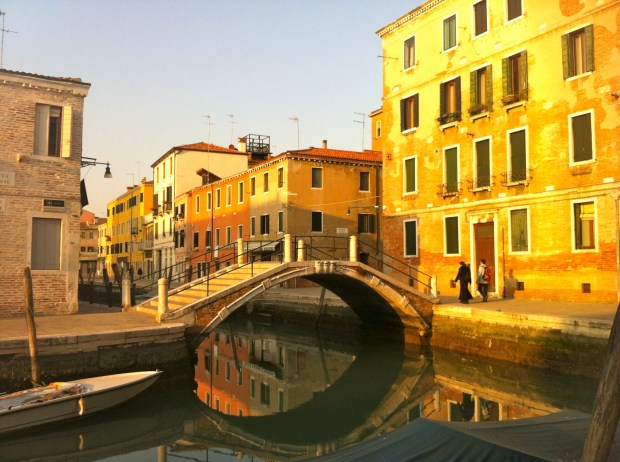 …and got out of the apartment around a bright and early 3:00 p.m., refreshed and hungrier than a hungover frat boy just released from the drunk tank.

We had two basic goals: eat (naturally), and find Piazza San Marco (St. Mark’s Square), where we assumed all the cool stuff was happening. 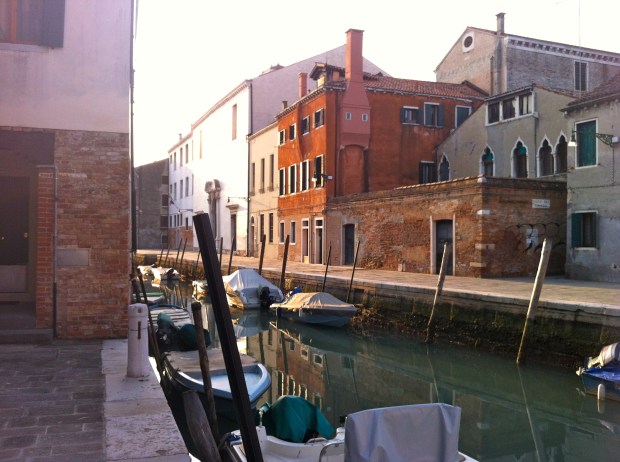 Our apartment was located in the quiet sestiere of Dorsoduro, a good 20- to 30-minute walk from Piazza San Marco…and what a lovely walk. We weren’t far from the Universitá Cà Foscari Venezia, the Peggy Guggenheim Collection, the Gallerie dell’Accademia (the largest collection of Venetian art in existence¹), and a beautiful elementary school, a dream place for any artist or writer. Can you imagine a commute that looked like this?

In the spirit of tourists of all stripes, we wondered out loud what it would be like to live here in this strange land of water and bridges. Naturally, Venetians face the same everyday situations everyone else does…like moving…just with different considerations. 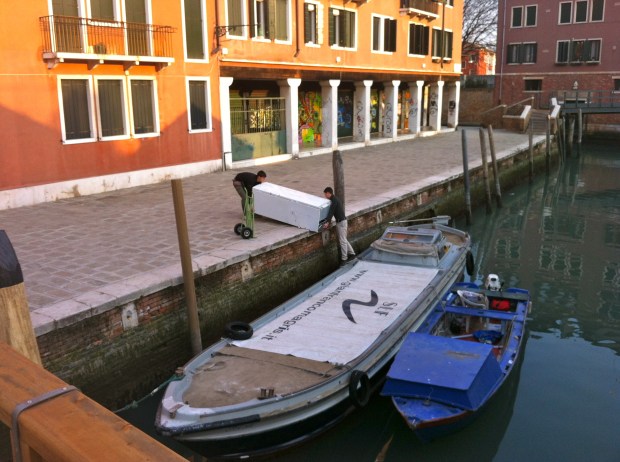 I wonder if they have bumper stickers that say, “Yes, this is my boat, and no, I won’t help you move!”

I confess, we hung around for a few minutes waiting to see if they were going to drop that fridge in the water. Disappointed, we moved on. 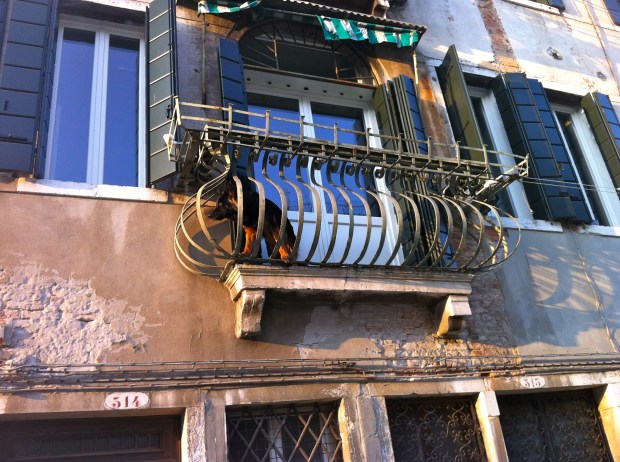 Of course, Venetians love their dogs just as much as Americans do, only instead of barking at passersby through yard fences, they park at them through artistically-wrought iron-enclosed balconies of buildings older than the country I’m from. (I bet when he gets bigger, he can climb on top and drop on people like Spider-Dog.) 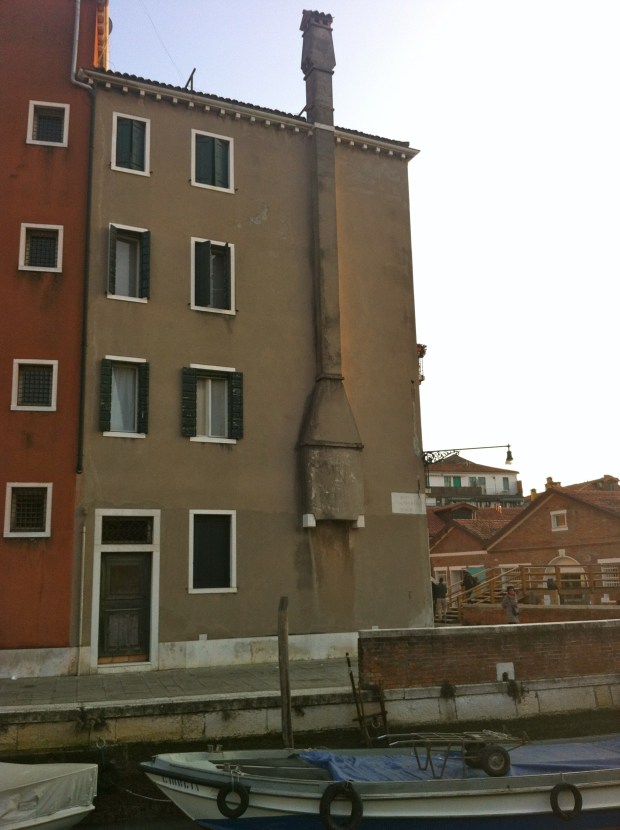 One of the crazier things about Venice is the frequent flooding. Many buildings bear high watermarks demonstrating this fact, and indeed, a ground-level apartment is not the most desired place to live because of the mold and deep chill. Therefore, in many of the buildings, the first floor is not inhabited…which is why you’ve got fireplaces starting at the second-floor level. About as crazy-cool as all the rooftop TV antennas in Rome. I love Italian sensibility….

And then we saw Smurfs. 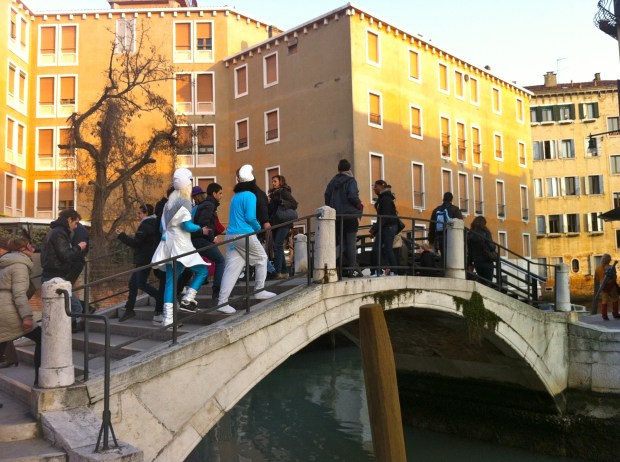 And people dressed as bovine… 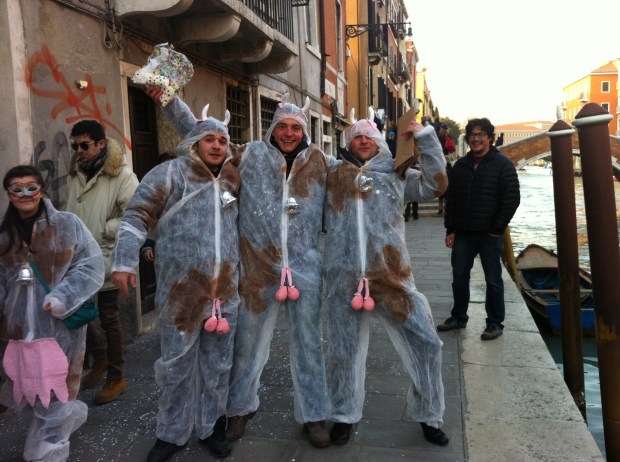 Kind of reminds me of Hollywood Boulevard! 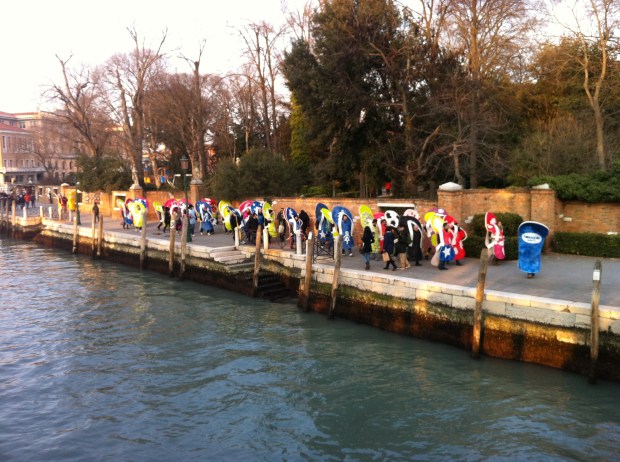 Haven’t seen this many flip flops since Venice Beach! 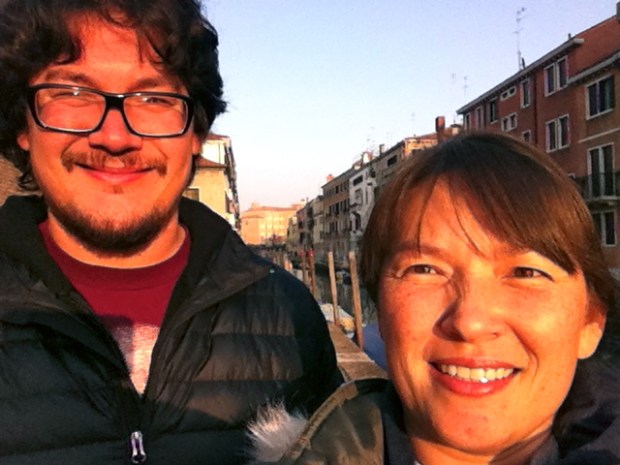 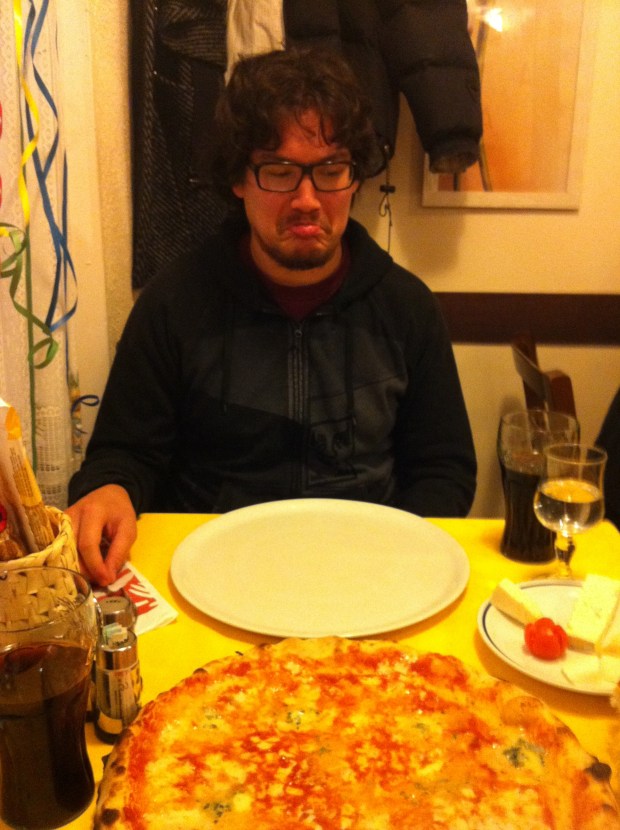 He’s just realized how crappy the food is back home. ;)

Or at least I was.

(Just kidding…two minutes later, he had a pie just a big as mine, and a smile to match.)

This was pretty much the last normal moment we had this day (not including the Smurfs and Bovine sightings). And it was a good thing we ate…because as we set out from the restaurant in search of High Adventure, little did we know we were about to take a tumble down the rabbit hole…and what a fine rabbit hole it was….

♥ By the by, stories are meant to be shared (but not toothbrushes). If you have made it all the way to the bottom of this post and enjoyed it, give a little share, wouldja? Spread my madness! I would be much obliged. 🙂