After having finally found our apartment and, thus, narrowly escaping a fate of wandering forever lost in the Labyrinth of Venice like rats, eking out an existence on the steps of churches and warming scraps of food on my hair straightener, we needed time to recover.

We took refresher naps, and I got a chance to review the carefully tabbed and annotated traveler’s guides and totally remembered I had a restaurant guide for Venice on my phone’s Kindle app. Not!

Actually, we dumped everything in a pile, peed, made sure the Internet was up and running — you know, basically assuring ourselves of civilization — then flung ourselves back out into the cold, dark tangle of Venice.

Cuz we were HUNGRY.

Were we afraid of getting lost again? Yes. Damn, yes! 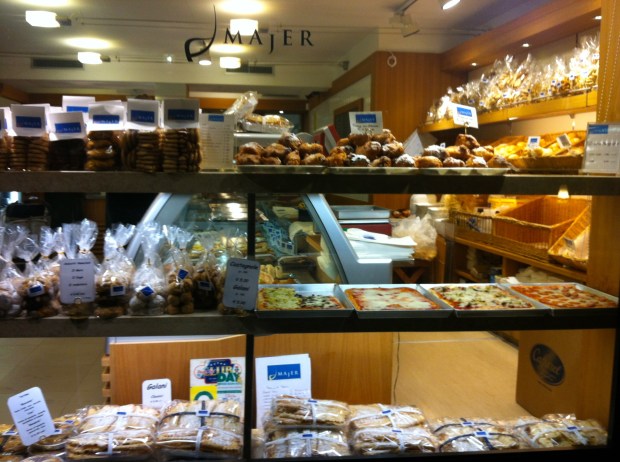 But let’s face it. When you’re walking through a landscape like this, what’s to be afraid of? Venice, give us your best shot! Ruin American food for us forever, we dare you!¹

Our strategy was simple: storm the first decent-looking sit-down place and order everything on the menu with a crazy-eyed demeanor. We figured it would bode well for efficiency in service.

But where to go?

We stood in a shadowed corner of Who-Knows-Where, took out our respective maps of the city, and surveyed our territory. We had three maps remaining (having lost the most important one 15 minutes after arriving): one showed bridges, one did not, and the third was sort of a general outline. My brother Jon carefully noted where our apartment was located and suggested a route leading somewhere deeper into the city.

I had already come to the conclusion that Venice maps are designed to make you go blind, so I was trying really hard not to actually focus on my map. Or maybe it was tears blurring my vision, for already, I was missing Pompii’s in Rome. How sad for us to have found perfection so early in our travels, I bemoaned. As I contemplated the difference between cured ham and prosciutto, ultimately deciding who gives a hoo-hoo, they’re both delicious!, my brother nudged me back to the here and now.

“So is that okay?” Jon asked me, pointing thataway.

I turned to look, and something tantalizing slid past on the chill breeze. I inhaled deeply. What was that?

“Is that cool?” he asked me again. His stomach made a noise like a strangling-to-death Muppet. I sensed his urgency.

I waved my schnoz about like a dog in a kitchen, concentrating. There it was again…the delicate aroma of….hope. Somewhere out there a pizza was calling for me, like a cheesy siren in the night. We were destined to be together, of this I was certain. And what kind of fool would I be to stand in the way of destiny? A damned fool, that’s what! 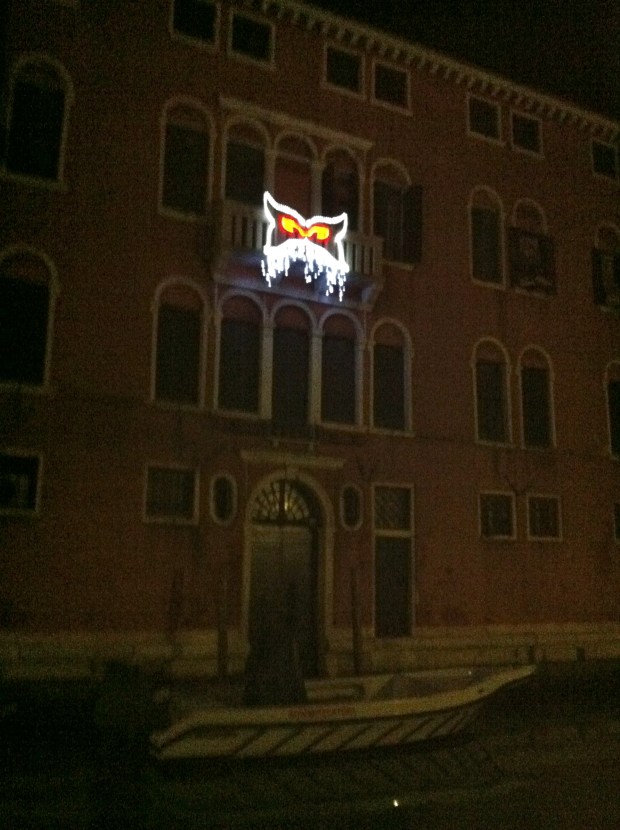 Soon we crossed paths with other Carnevale-minded folks sporting bejeweled masks, plushy animal hats, and giant fake fros (never figured that one out). A haphazard collection of humanity, we trudged together in staggered armies along moon-slicked canals and over bridges, apparently everyone following everyone else. We, the Sheeple….

Our way was lit by the glow of a thousand burning cigarettes as apparently everyone in Italy smokes. Although no one said anything, the camaraderie was there. If we became lost, we would be lost together…which meant we could eat the folks who succumbed early.

As the journey began to stretch into infinity, I paid close attention to the ones who were slow on the bridge stairs, who walked a little too close to the edge of the canal, trying to determine the easiest one to cull from the herd. As I was deciding between the full-on surprise-leap-from-the-shadows attack or a simple low-to-the-ground football tackle, my brother grabbed my arm.

Jon, sticking to our strategy of “the first decent sit-down place we can find,” pulled me into the first decent sit-down place we found. It was a quiet little trattoria run by local Chinese-Italians, naturally. High on the exhilaration of being strangers in a strange land — and being saved from committing heinous acts of cannibalism — this only made sense. We were fish out of water and breathing deeply of air that tasted of fresh-baked pizza, pizza made in the Mother Land.

We sat by the window where the chill seeped through and festival-goers marched past. Rum and coke warmed our insides. Everything felt right with the world.

Our hosts were wonderful, a middle-aged couple and their dishy college-aged son. In the spirit of family-owned and -operated businesses, they did everything. They served, they tended bar, they cooked, and they deejayed.  Lady Gaga pumped out of the speakers, making me feel strangely, happily close to home.

The best part was how they joked and laughed with the regulars at the bar. It made me nostalgic for the old place we sold a few years ago. Every business creates its own community, and if they are fortunate, that community becomes family. Clearly, that was the case here, and it made me miss everyone back home.

But then my Pizza of Destiny arrived, and I forgot all about those schmoes…and even Pompii’s…at least for the moment. Crimine di passione!

A light, airy, crackly crust layered with tangy sauce, mozzarella, and piles of prosciutto. It was authentic and fantastic. I wish I had my head about me at the time and took some pictures, but my reptilian brain had taken over at this point, occupied with consuming every last cheesy bit of crusty goodness.

Jon didn’t say much, but his silence spoke volumes. He, too, was in Pizza Nirvana, and I, for one, didn’t want to interrupt his enlightenment with inane conversation.

Afterwards, we leaned back in our seats satisfied and toasted the strangeness of our situation, the unlikelihood of being here, now. The conversation at the bar floated over us in melodic bits, the words not understood, but the feeling behind them full of warmth and friendship. It made the perfect backdrop for such an unlikely scene.

It was pretty wild that we were here. In fact, it seemed almost…well, wrong. My brother and I don’t come from a family that believes in traveling for traveling’s sake. We come from hard-working-class stock, highly cautious about future rainy days.³ If you’re going to blow some cash flying halfway around the world eating pizza and spending half your time lost, you better have a damn good reason for it.

And I did have a damn good reason. I was here to research The Book.

There’s a little pressure there.

But sitting there in the afterglow of an amazing meal, five days of discovery and adventure ahead of us, I wasn’t feeling worried. It’s hard to worry in Italy, a land where there’s more sandwich shops than Southern California has Starbucks, where unbelievable coffee anywhere you go is a given, and where cheery greetings of Prego! welcome you on the other side of every door.

It’s a magical place really. And at its core, my book is about…well, magic…the magic in our lives, in our decisions, in the unexpected paths we travel. Even with a first draft completed, I wasn’t sure exactly what it was I was here looking for. Yes, yes, I wanted to experience Venice so that I could lend authenticity to the Venice scenes in the book, but there was something more that I came here for.

And sitting there across from my brother, both of us relaxed and smiling, in a whole other country, with no other agenda than to explore, I knew that whatever it was I came here for, I would find it. I had faith that Venice would deliver what I needed. I knew something strange and wondrous was coming our way, and we just needed to put ourselves in its path when it came thundering in.

It was time to go play in the street! 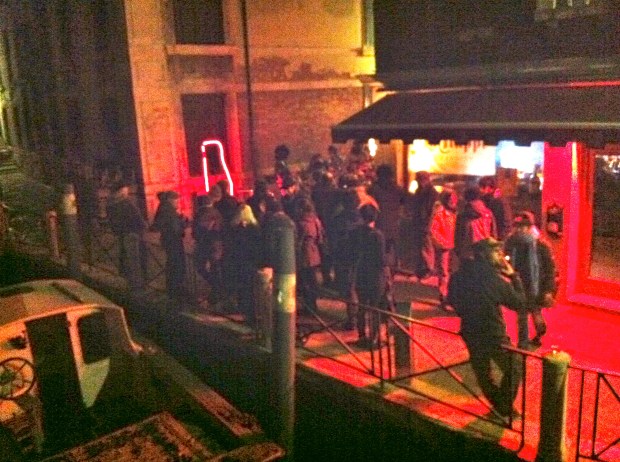 ¹ Totally ruined, spoilt beyond repair by a delicious and gluttonous descent into Venetian street food. And totally worth it.

² Okay, this is a blatant lie (something you should come to expect from writers, by the way). I didn’t do a whole lot of leading in Venice, and mostly found my way home by leaving a trail of brioche crumbs.

³ I feel compelled to add that our family is also the most supportive family I could ever wish for. I am beyond grateful that my parents took on the not-so-little task of watching my little one to let me do this crazy thing I had to do. Mom knew what she was doing though. I might be 38 years old (note: might), but she’d be damned if her baby was going out into the world without protection (hence, little brother chaperone), international calling, and a quick refresher on parking lot kung fu. (Keys in hand, ladies! Always approach your vehicle with keys in hand!)