Due to a satisfying dinner behind us and adventures unforeseen ahead, we needed a little din-Euro. (Get it?) So we got in line at the ATM and suffered in silence while this drunk American kid behind us strangled a great American movie quote over and over. I decided this could go on no longer.

I turned around, smiled sweetly, and said, “‘Hi! You guys want some cookies?’”

His companions busted up laughing, and Funny Boy pointed at me in delight. “That’s how you say it! Thank you!”

(Of course it is. I should know. This is my cousin’s favorite line from Corky Romano and has gotten almost as much play time as Life of Brian’s “He’s not the Messiah, he’s a very naughty boy!” But I digress….)

Naturally, this made us all good friends (and nerds) for the duration of our wait in the ATM line. With Funny Boy were his two buddies, also American, and their gal pal, a Parisian med student, who we plied for Important Words One Should Know in Italian. Funny Boy held up his cigarette. “Fumaaar,” he said proudly. Gal Pal laughed. “You should be careful how you say it. If you want a cigarette, it is fumar. But if you are looking for perhaps something a little stronger, it’s  fumaaar!” She raised her eyebrows suggestively as she said it. We all smiled at each other and tried it out together: “Fumaaar!” (For a tutorial demonstrating this invaluable inflection technique, please click here.) Armed with this important piece of information, we promised we would be careful with our enunciation lest we stumble down brambly paths to awkward and possibly illegal situations, then bid our new friends “Buon Carnavale,” and set out to find Piazza San Marco. We wandered through the Labyrinth in a general westerly direction and soon came to Ponte di Rialto, its interior lined with brightly lit shops, its exterior with festive lights. Brother, it was hopping! Large groups of costumed folks gathered along the outer balustrades on either side of the bridge laughing, eating, and making loud merriment. 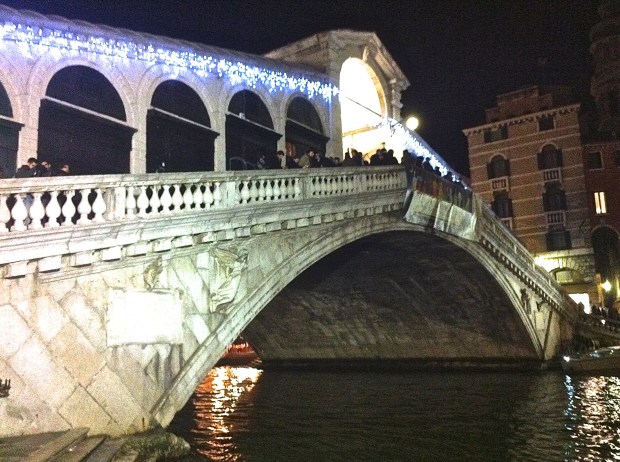 What’s cool about this bridge is not only did Antonio da Ponte beat out Michelangelo (among others) for the design job, but that he had haters predicting his design, completed in 1591, wouldn’t last. Today, it is the oldest bridge in Venice, a world-recognized cultural icon, and the shopping is magical. That’s right. Magical. As we climbed up the stairs through the center portico of the bridge, jam-packed full of people browsing the crowded shops selling Murano glass, Venetian masks, and countless other treasures, we saw it — Ollivanders Wand Shop! 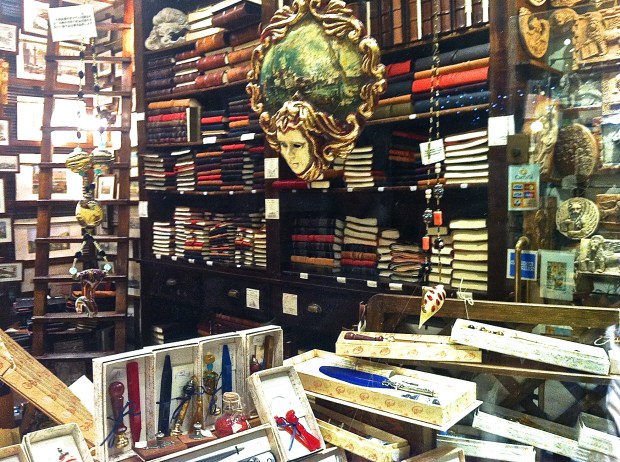 Okay, it wasn’t really Ollivanders, but for a writer and an artist, it might as well have been. It’s called Rivoaltus (legatoria). Enter with caution. Everywhere the eye rests, there is a treasure to be taken home and cherished… 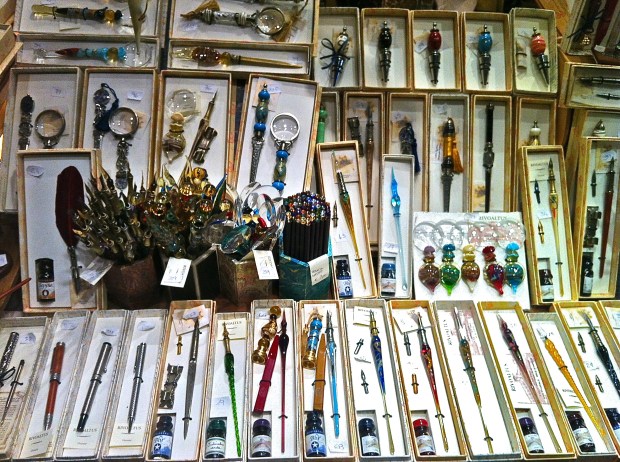 It was like stepping onto a movie set — no, stepping into a movie. The door fell softly behind us, muting the steady passage of people who climbed the bridge stairs past the front window. A sweet old lady assisted us, unboxing different pen sets and showing us the shop’s extensive sketchbook collection. She explained the shop belonged to her daughter, that she was only helping out, but as I watched her carefully wrap and package each item we had selected, it was clear she was of heart and soul with the place. The highlight for me, I have to admit, was coming away with a new prized possession: a gorgeous Murano glass pen with glass nib. It’s the aquamarine blue of the canal swirled with bronze and gold glittery swirls. And suspended inside is a single silver unicorn hair. (Actually, how I found out about this was, I asked the old lady if there was a single silver unicorn hair suspended inside, and she smiled and nodded at me. So that was really lucky. I’m glad I asked.) 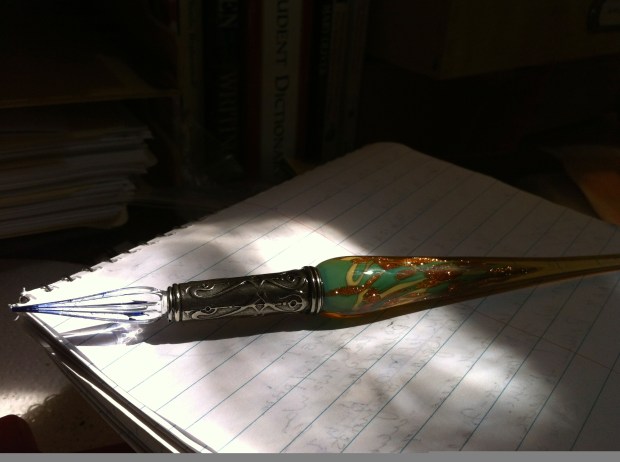 So we left Rivoaltus a few Euros lighter (gross understatement), and continued on to the top of the Rialto Bridge where we found the source for much of the ambient cacophony: toucans on drums. (Duh.) It smelled funny here. Real funny. Jon and I looked at each other and laughed. “Fumaaar!” 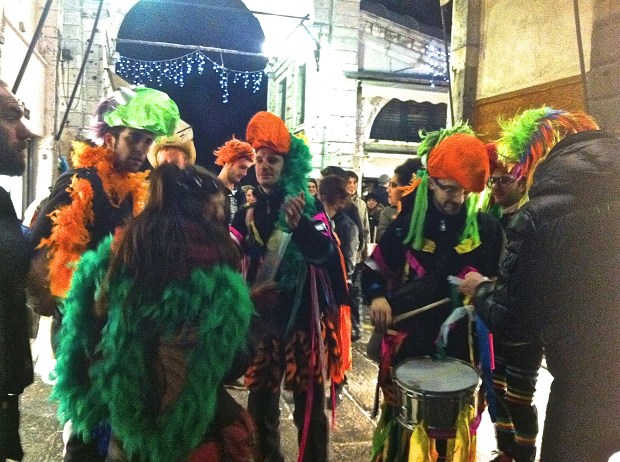 We negotiated past the happy toucan band and descended into San Marco, leaving the bright lights of the Rialto behind to walk the strange beautiful dream that is Venice at night. The architecture is from another time, another world, outlined and divided by moon-glossed canals. And there is this randomness that lends to its dreamlike effect, where you can’t explain how you got from one place to another or why a particular person suddenly showed up. Incongruous store windows take turns with the dark first floors of seemingly abandoned buildings, the path a narrow corridor between stone and brick, arching across still canal waters. And people walking everywhere, always, plumes of heated breath and cigarette smoke rising into the chilly sky. To describe how we got from Ponte di Rialto to Piazza San Marco, it’s like recounting a crazy dream: First, I heard the toucans drumming, drumming for me…but then you told me you needed a new tricorn hat…and I pointed out that perhaps two feathers was a bit much, even for a fancy fellow like yourself…you’d have to be extra fancy to pull off two feathers, and being extra fancy is thankless work, especially for just one more feather…. 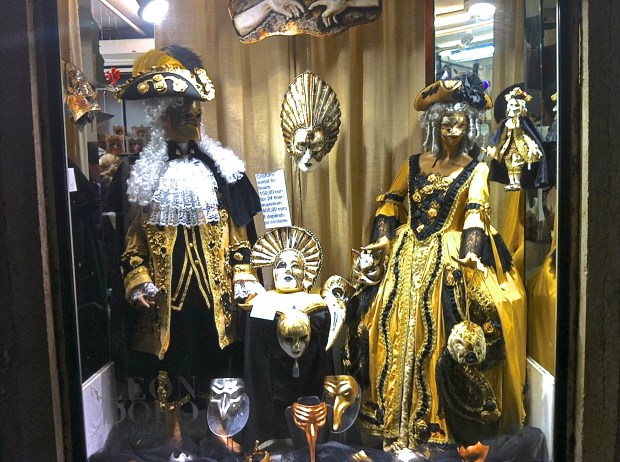 …but then you saw the dress, the dress, the dress, and insisted I try it on…but I was afraid it would make my head disappear into a huge ball of squiggles, which reminded me of the eyes of the dead in Joe Hill’s excellent ghost story — he’s King’s son, dontcha know — “Heart-Shaped Box,” which made me worry I might’ve died and missed it all…. 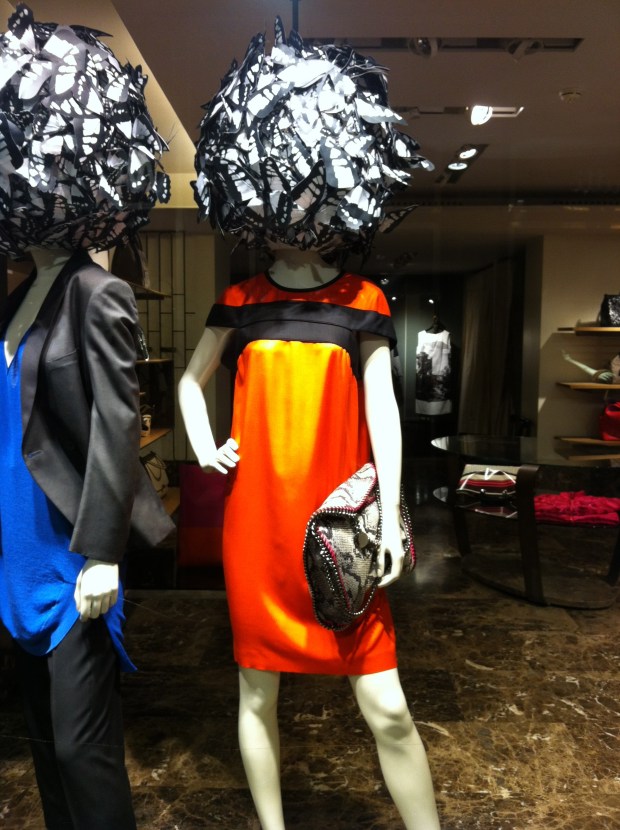 And then there was a band. 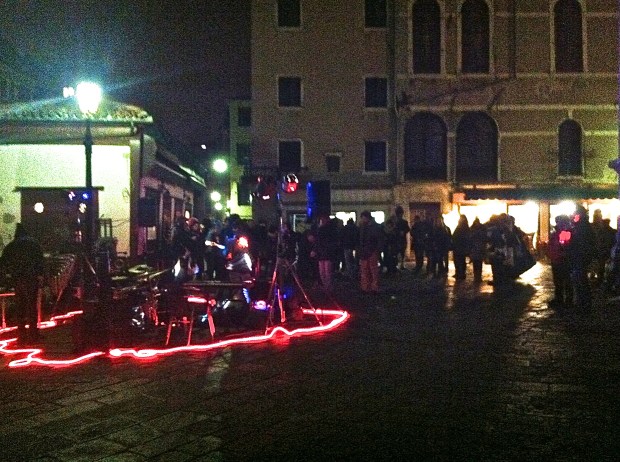 Yep. That’s pretty much what it’s like walking through Venice at night. Like a dream, only it’s real. Whoa. And there really was a band setting up, so we decided to hang out under the trip-out lights projected onto an old building and take a breather…which meant it was time for some vino! 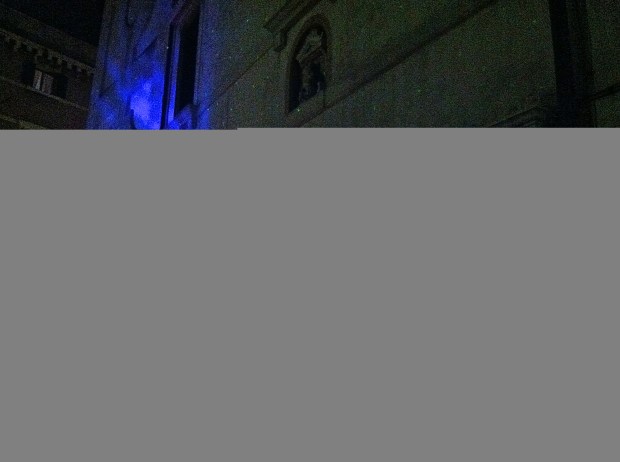 Now would be a good time to share with you one of our more exciting discoveries about Italy: vino sfuso, or bulk wine. Basically, for as little as 2 Euros, you can get a plastic liter bottle filled with pretty great-tasting wine, and you’re allowed to drink it in the streets. Yes way! This kind of blew our little Southern California minds, I have to admit, but we pretty quickly realized the necessity of porting wine under one’s arm while walking around Venice at night. It was friggin’ cold. Seriously cold. This is the real reason why Italians smoke and drink…to stay warm! We listened to the band fart around for a while, realized they weren’t going to play anything but lead title lines from American songs, and so soldiered on, alcohol warming our limbs and lowering our inhibitions. It was time to find Piazza San Marco. (I mean, dang, how many blog posts had it taken to get here already?) But then we turned a final corner and Holy Campanile! we were finally here. 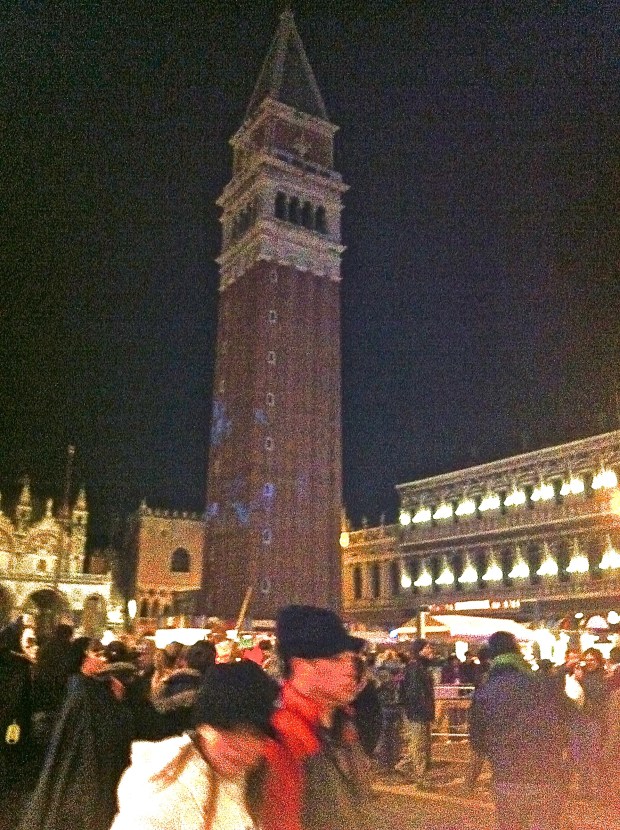 Sweet Doge, we made it! It was like a giant Halloween party! Crazy costumes everywhere! We had finally found the heart of Carnevale! There was a giant stage set up along one end of the square with various singers, dancers, and musicians entertaining the crowd. Festival-goers mingled everywhere despite the lateness of the hour. And in the middle of all this glorious madness was a giant coffee stand. Exactly what Dottore Peste ordered. 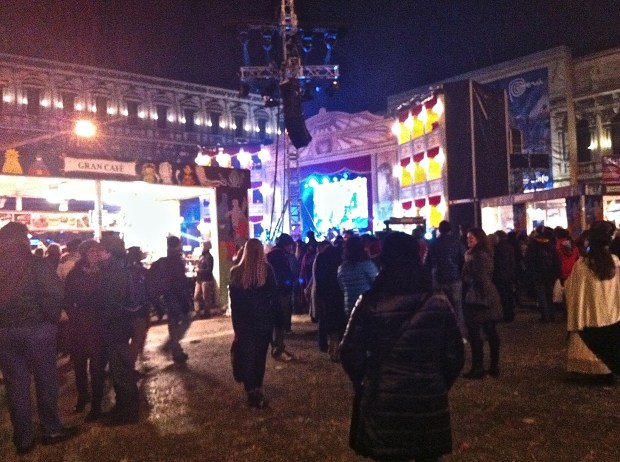 So I got in line behind the Ghostbusters… 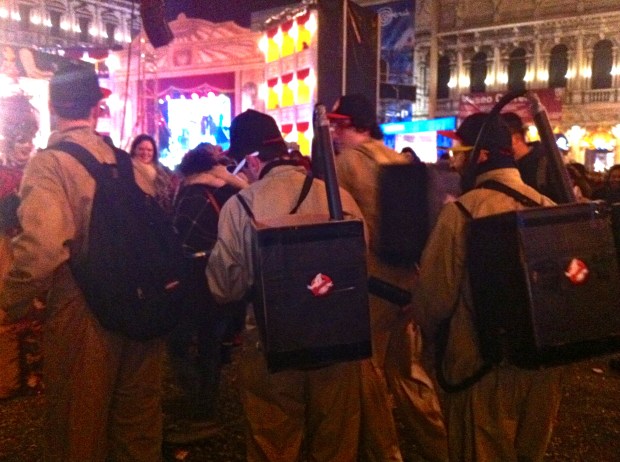 …and got myself a cup of mochaccino, which is Italian for “Wake the fuck up (chocolate-flavored)!” This turned out to be a good decision because apparently we were going to be doing some dancing. 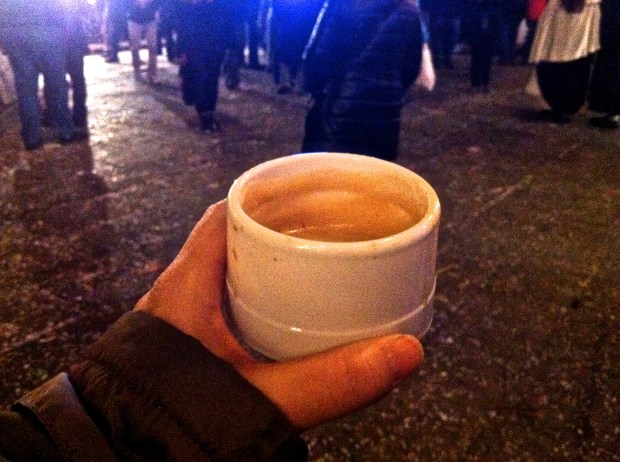 That’s right. I said dancing. We followed the Ghostbusters out of Piazza San Marco, them silly boys with their retro boombox ghettoblasting the theme song to the movie — “Who ya gonna call?” — shooting their plasma guns (aka, leaf blowers) up everyone’s skirts. 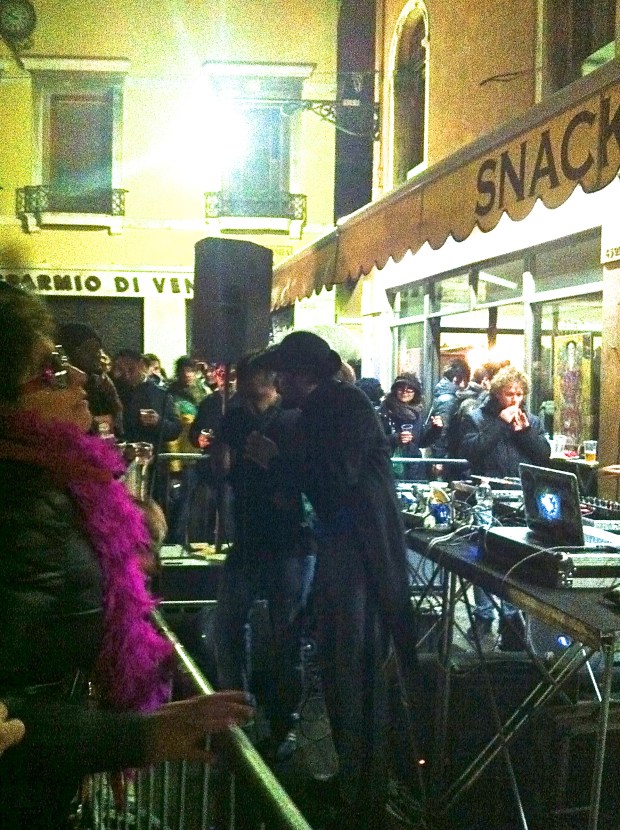 We followed the shrieks of surprise into a small square staged by an aptly named snack bar that was getting totally ruled by the Reggae Kings of Venezia. Yup, totally what I expected.

Not really, but that’s what pleasant surprises are all about. Fumaaar! 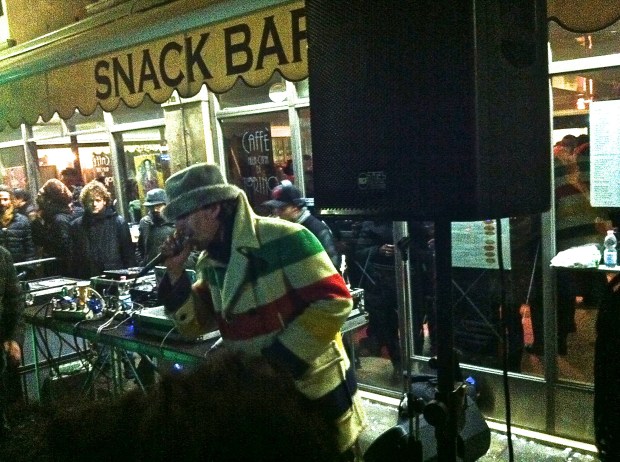 At first, it seemed a little odd. (It smelled funny here too, but that wasn’t the odd bit.) I mean, this was really the last place I expected to find reggae, much less good reggae. But that’s what it was…really good reggae.

It didn’t take much to get over my fear of embarrassing my brother (ha!), and soon we were all dancing. (Apparently, he wasn’t afraid of embarrassing me either…ahem.) The whole crowd bobbed and moved to the beat of the music like one person. It was awesome. The vibe of the crowd was together…One love, one heart, let’s get together and feel all right…sing it! You ever gotten high off of ambiance? I have. It’s real. The Jamaicans call it irie, and it’s lovely. And no, funny boy, it wasn’t the secondhand smoke. It was genuine. It was this crowd, this particular collection of tricorns and neon Afro wigs and ski caps, rising and falling together to the awesome reggae beat with the shared determination of good times, good friends, good life. Irie. You could cut it with a knife and eat it for dessert, it was that good. 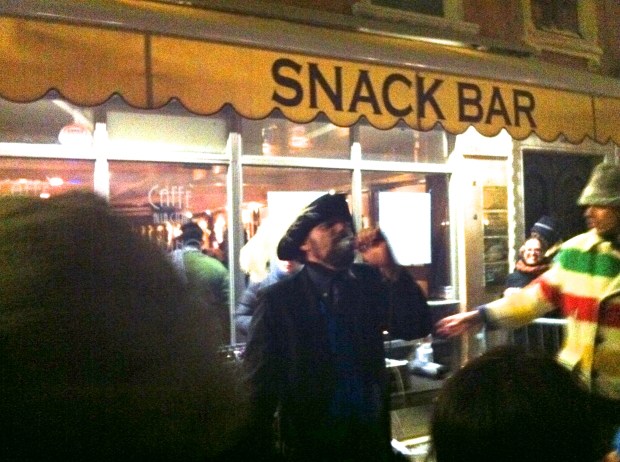 Of course, all good things must come to an end — to make way for other good things, of course — and after 45 minutes of riding on the Great Space Coaster, they brought out the giant boxing monkeys. It was time to move on. 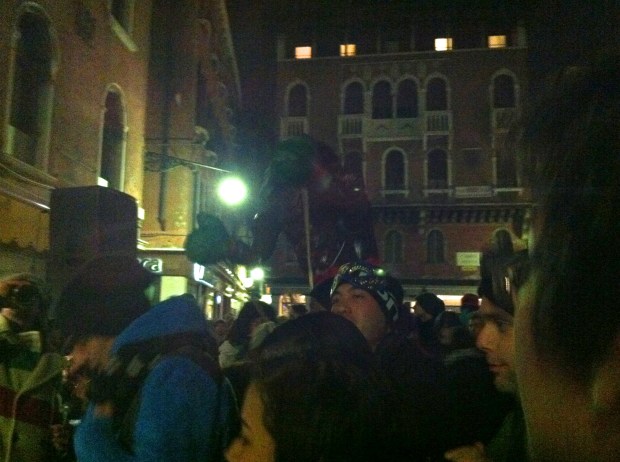 We left the Magical Piazza of Irie, and headed toward the sea. It was late and we were both getting tired, but I still wanted to check out the Hotel Monoco where my protagonist spends her first few nights in Venice, and I also wanted to see for myself the great Baroque church Santa Maria della Salute from across the canal.

As we slipped like shadows back into the dreamscape of Venice and fell into a silent march, I thought about the vagaries of language and the underlying principle of “Fumaaar.” It had become more than a funny vocabulary word at that point; it had transcended into an all-encompassing concept to describe the difference between what you expect and what you find, what you ask for and what you receive. It is in this difference between hope and reality where you find all the best stories… But if you’re looking for cloaked-in-shadows stories involving borderline nefarious and semi-legal activities lacking any common sense, and things that go boomp!boomp!boomp! in the night, you’re gonna find those by the docks, which is, incidentally, where we were heading. Onward and onward! __________________________ ♥ By the by, stories are meant to be shared (but not toothbrushes). If you have made it all the way to the bottom of this post and enjoyed it, give a little share, wouldja? Spread my madness. I would be much obliged. 🙂 And as always, comments are welcome, printed out, framed, and cherished. 🙂

4 thoughts on “LOST IN VENICE, PART 4: THE SPIRIT OF FUMAAAR!”