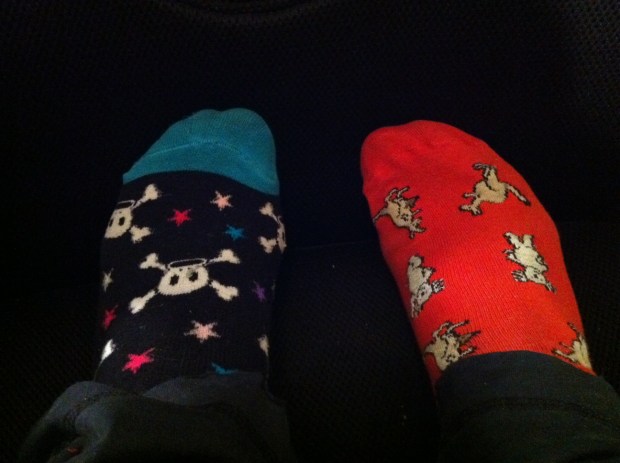 Some things will never change...thank goodness.

Some years ago, when I was working as a court reporter in civil court, I reported a wrongful termination trial.  It probably wouldn’t have been memorable except for the fact that the plaintiff’s attorney was a walking disaster.

This poor woman always looked like she had gotten laser-blasted out of bed and instantly teleported into the courtroom.  She had this sort of chronic wild-eyed look on her face, her hair truly bordered on Einsteinian, and she never could find anything she needed.  During her examination of witnesses, she would shuffle and paw through her exhibits with her client scrambling to help her while the judge, opposing counsel, and jury looked on.

Then one morning, the attorneys stepped to the sidebar to argue an objection outside the presence of the jurors, and in the middle of her own argument this woman attorney gasped.

“Is something wrong, Counsel?” the judge asked.

The judge chuckled.  “Got dressed in the dark, did you?”

Apparently.  As she left the sidebar to return to counsel table, her face was bright red.  She took quick little steps, as if trying to blur her feet, but there it was, two black flat pumps, very similar in style and color, but one definitely with a bow and one definitely not.

And although I chuckled too as she continued the rest of her examination of the witness seated, with the toe of one shoe crossed over the other protectively, deep down inside I was relieved.  Why?  Because I was so glad it wasn’t me.  Because it could have been.  No kidding.  That could have been me, feet shoved under the desk, eyeballs trying to telekinetically shove the hands on the clock towards quitting time.

Truthfully, I felt like an awful hypocrite for even smiling at this poor woman’s courtroom mortification.  Every morning I would get up in a panic (because my auditory nerves do not always process the sound of the alarm); rummage through, sniff, and refresh clothes in the dryer with a dryer sheet while I brushed my teeth (because I was always too tired at night to get my crap together, and gullible enough to believe the lies I would tell myself about getting up early to do laundry and other such nonsense); jam out of the house with wet hair and turn on the ignition of the car only to discover I was out of gas (again, because I believed it when I told myself I would get up early and stop at the gas station on the way out)….

You see where this is going.  We don’t need to go through all the excruciating details.  Suffice it to say, I was hardly ever in a good mood by the time I skidded into my chair each morning.  (Got pretty fast carrying my laptop bag though.  Raced my boss up the escalators once.  Naturally, I beat him…but that’s only because I kicked over the wet floor signs to tangle him up.)

During this time of my life, my excuse was that I commuted 20 hours a week.  Then, of course, we opened a business, and I had that going for me as a great source of excuses.  Before that, it was school and work.  Now I have the baby to blame.  She’s a great scapegoat.  She’s the reason why I’m late, unprepared, confused, uninformed, and anything else I can get out of.

But now she’s starting to talk.  She’s going to rat me out soon, so I thought I’d take control of the situation and just admit it.

I have never learned the discipline of preparing for my day ahead of time.  It takes me two hours to get out of the house.  I do my dishes more on a weekly basis than a daily basis…and that’s being generous.

To be fair, I don’t spend very much of my “free time” — haha! energy+coffee came out of my nose just now! — goofing off anymore.  As soon as the Toddler falls asleep, I go straight to the computer and write.  While this is great and I feel like I’m finally finding my groove with my work, I am still finding myself rummaging constantly for items and notes I need and the chronic frustration is killing me.  I hate living like this.

My laptop basically sits in a small patch of bare desk at the bottom of a stadium-like ring of papers, empty Starbucks Doubleshot Energy+Coffee cans (mocha, thank you very much), and paper plates stained with Hot Pockets grease.

My whiteboards are covered with a mix of novel-planning, short story rosters, grocery lists, and now moot reminders (like “wrap Christmas gifts”).

I have boxes of miscellaneous crap lining the floor, including an old bottle of antibiotics that made me feel sick…but I can’t bring myself to throw it away just in case.  Just in case what? Honestly, there’s always that irrational fear that something completely unexpected might happen…like a nuclear attack or a zombie epidemic.  You never know is all I’m saying.

By themselves, these things aren’t so bad, but cumulatively — let’s just say I have spared you many, many gory details.  I am now eager — no, desperate to cast off the shackles of disorder.  I think the writing will only benefit from it.  Certainly my mental health will.

So this month’s focus here at My Blue Screen — aside from racking up 100,000 words (with your help, of course!) — is Spring Cleaning.  Yep.  That’s right.  Spring has come early this year.

And let’s face it.  If we do end up having a zombie outbreak, chances are I won’t be alive long enough for the antibiotics to take effect…especially if they’re two years past their expiration date.  And even if I do survive the initial attack and subsequent infection, I’ll still end up with one terrific headache.

Anyway, I know this is getting long, but I wanted to share one more thing with you.

As you may know, I think Steven Pressfield has written one of the best, most practical guides to the creative life:  “The War of Art.” He also rocks an awesome blog. I hope Mr. Pressfield will forgive such a long excerpt, but I really think he says it best.

In the chapter headed, “A Professional Seeks Order,” Pressfield writes:

“When I lived in the back of my Chevy van, I had to dig my typewriter out from beneath layers of tire tools, dirty laundry, and moldering paperbacks.  My truck was a nest, a hive, a hellhole on wheels whose sleeping surface I had to clear each night just to carve out a foxhole to snooze in.

“The professional cannot live like that.  He is on a mission.  He will not tolerate disorder.  He eliminates chaos from his world in order to banish it from his mind.  He wants the carpet vacuumed and the threshold swept, so the Muse may enter and not soil her gown.”

At this point, I would be happy for her to be able to sit on the couch without having to clear a space between the stuffed animals, broken crackers, picture books, and laundry.

Raising the bar, that’s me!

2 thoughts on “A PROFESSIONAL SEEKS ORDER”