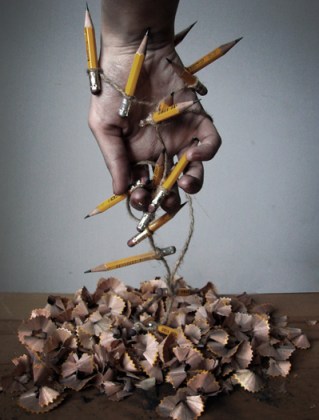 Before the baby was born, I had loads of time to write.  In fact, thinking about how much time I wasted pains me the way burning $100 bills pains Scrooge McDuck.

Now, in the midst of NaNoWriMo frenzy, pushing 43,000 words so far, I have also written two short stories for my class that I’m fairly happy with.  My first drafts are closer to final draft than the first drafts of my previous stories, they’re shorter and more concise, and I wrote them in record time…all because I needed to get back to the novel in a hurry.

On top of that, I’ve probably posted to this blog more than I have any other month, as well as kept up on some other writing projects.

And the wild thing is I’ve been able to do this around the baby, who rightly takes up 99% of my time.  Fat Cat plays with her for two hours in the morning, and she gets her Dada time.  The rest of the time, she’s with me.  I even write in bed while she naps.

It’s sort of mind-boggling, to be honest.  I’ve spent months trying to get through a revision of a 70-page novella, and in the course of 24 days, I’ve written over 170 pages.  How does that happen?

I guess I’ve been going about this the wrong way all along.  I should have had a baby a long time ago.  🙂

0 thoughts on “A WONDERFUL SIDE EFFECT OF NANOWRIMO”