So I wanted a new blog header, one that was more than just a nice picture, and one that was related to writing, obviously…though I have been enjoying the “Baby and the Wolf” temporary header.

I had a few ideas about taking photos of Polaroids of my laptop and stuff like that — there was even a few test shots of dinosaurs — but in the end, I liked the idea of having something beautiful across the screen of my blog that embodies my…well, my word.  I don’t know what else to call it.  It’s like my lucky token…you know, my word.

I know.  That seems like a cheesy word to lay claim to.  I get that it conjures up the image of a couple of stoner garage rats making horns and swinging around their guitars.  “We’re gonna be epic, duuude.  Billionaires!”

I can’t help that.  In fact, I embrace it.  I embrace the cheesiness!  I cheer on the stoner dudes mooching off their parents trying to break into the music industry, the television industry, the whatever-they-know-they-were-put-on-this-Earth-to-do industry, so long as they’re doing their work.  Too many people out there have convinced themselves to be safe and set reasonable goals anchored in reality instead of risking exposure of their tender underbellies while reaching for the stars.  It’s hard to stretch and grow in the fetal position, dude.

But “epic” is not just about dreaming big.  To me, it reminds me how you always get what you give.  This writing thing I do is one of the most important parts of me, and every day I thank my lucky stars for letting me have this need to make stories and being in such fortunate circumstances to fulfill it.  It’s that sticky-sweet part of my bone marrow, and if it were gone, I’d be hollow and empty inside.  Hell, I could write the sweetest country western song that would make your dog bawl, that’s how much I love writing.

So why would I ever give it anything less than an epic effort?

This is a truth that I wish I knew when I was younger.  People don’t ever become epic in their pursuits, they just get recognition for it.  I think they were always epic to begin with, in their practice, in their work ethic, and in their spirit.

This is how I want to be epic.  And I hope that my blog encourages folks to be epic too.

See?  Now you feel bad for thinking me corny.

Now a serendipitous thing happened this New Year’s.  A friend brought over this special beer.  It’s the only beer I drank, and at 9.5 percent alcohol, it was the only drink I needed.  He was nice enough to let me keep the bottle.  Why was this beer so special?  Let me show you. 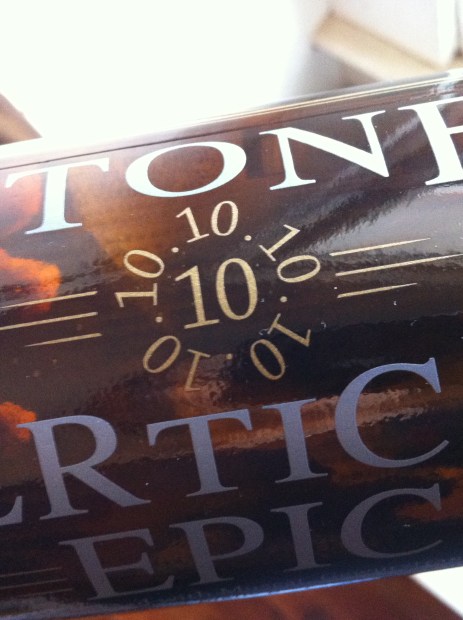 Yes, it’s Stone Brewing Company’s Special Edition Vertical Epic Ale.  The epic part is special enough, but this beer also happened to be produced on 10-10-10, my 37th birthday.  That’s pretty darn cool, but when you flip it over… 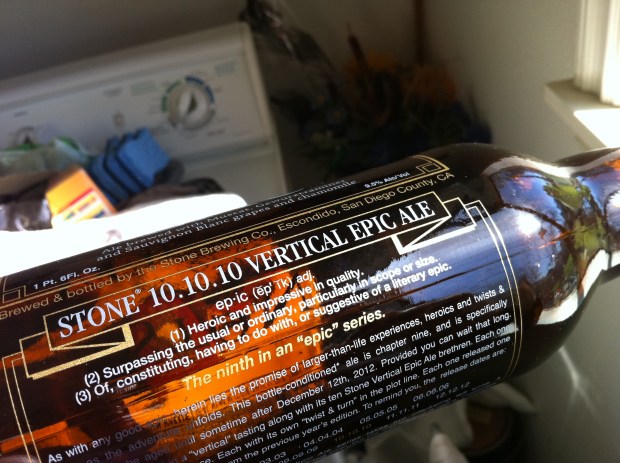 …the very definition of epic.  Perhaps it’s a silly little coincidence, but when I first saw it, I had a sense of magic, of things shifting into place.  I don’t know how to explain it better than that except that it happens from time to time, and it’s never failed me before.

~ Test Shots in the Kitchen ~

So, how to translate this concept into a usable blog header?  Well, I got lucky.  I was making tea in the kitchen one day when I noticed the light was rather lovely cast through my tea. 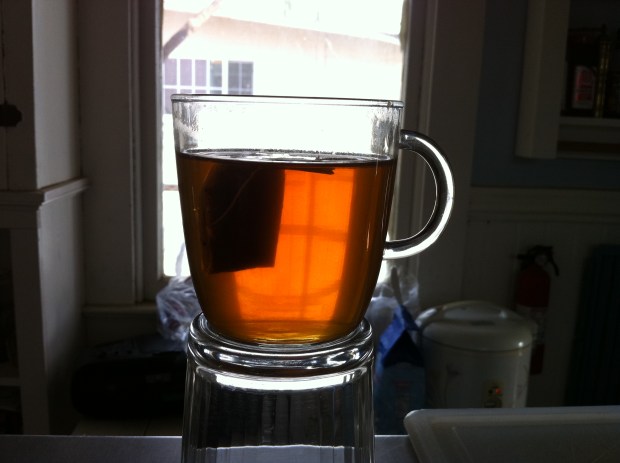 Mostly I was playing around with the camera on my iPhone 4, and I got this shot, which gave me an idea… 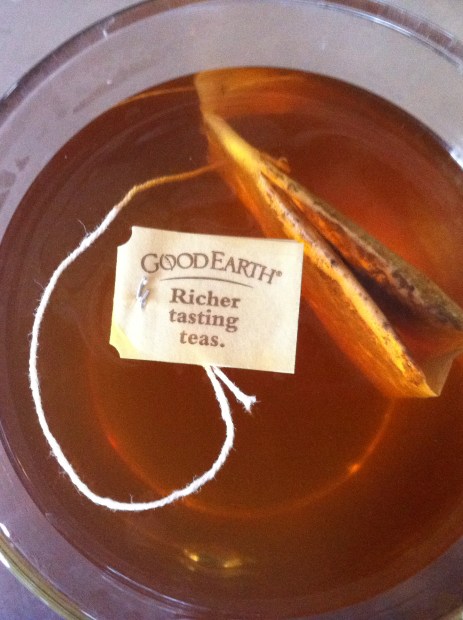 Being that tea leaves are often read as part of someone’s fortune, what if you could create your own fortune?  Drink Epic Tea.  Something along those lines.  I thought it might be fun to maybe type up the epic definition and fashion it as part of the tea brand.  I wasn’t sure exactly how I wanted to do it honestly.  I just knew I wanted the epic definition from Stone Brewing Company (these people have the absolute best copywriters in the biz), and I wanted the prettiness of the tea, both things that fill me when I write.

I believe in starting with the basics.  I am no graphic designer, and  I don’t have any photo editing software beyond Paint.  I have OpenWriter, and that’s what I ended up using.

First, I gave it a shot with one of those free online logo makers to see if I could make something that would look nice on the end of a tea bag string.  This is what I got:

Pretty cool for free logos, but too small to be picked up on camera.  (I’m sorry I don’t remember where I generated these, or I’d link it.)

Ah, well.  Then I thought maybe I should just try typing it out and play around with fonts and see what I could finagle.  I used the epic definition from the bottle verbatim (because it’s perfect and I give Stone Brewing Company both credit and props).  It looked a bit like the shape of a heart, so I laid a lined heart over it to see what it would look like. 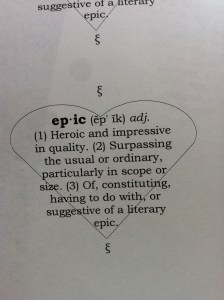 I thought it looked pretty ugly, but I liked the idea of it being heart-shaped.  So I tried again and ended up with something better. 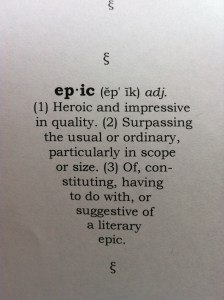 Now all I needed was some hot water, a tea bag, good lighting, and great company.

Location:  Behind the Pink House on a Butcher Block Table 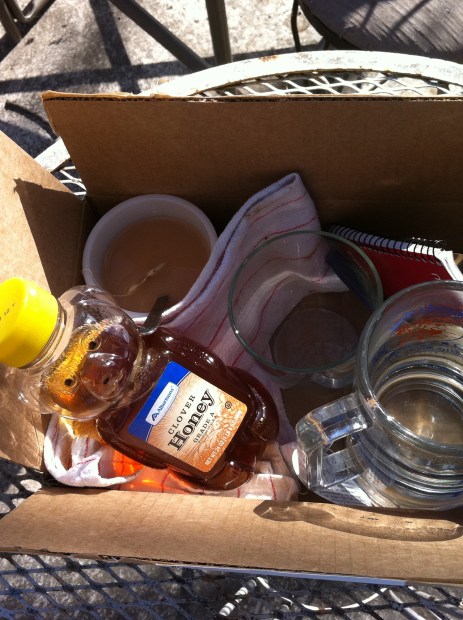 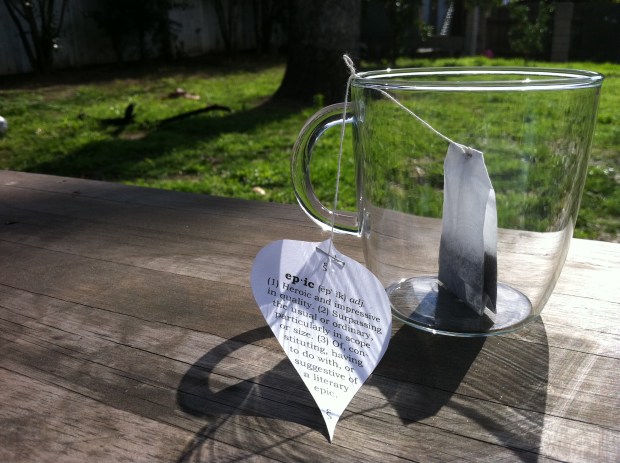 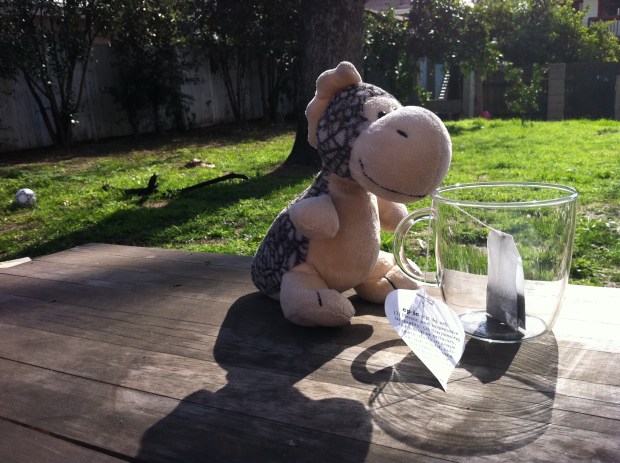 We tried to work with the dinosaur, but she wasn't "feeling it." 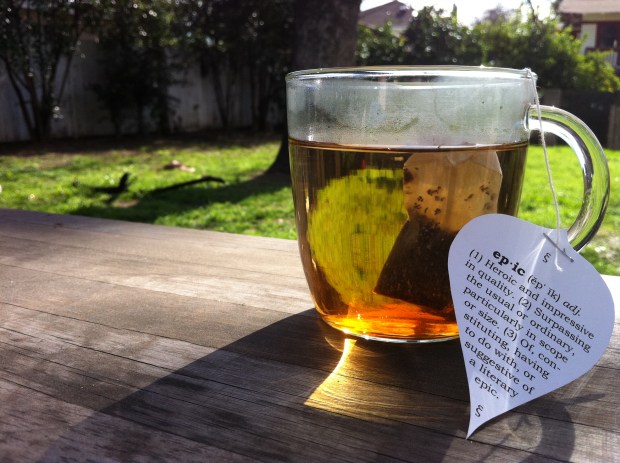 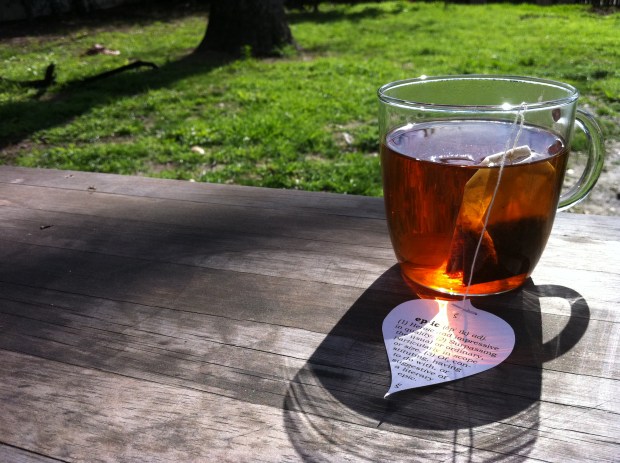 That's it, girl! Show us what you're about! Work that tag! 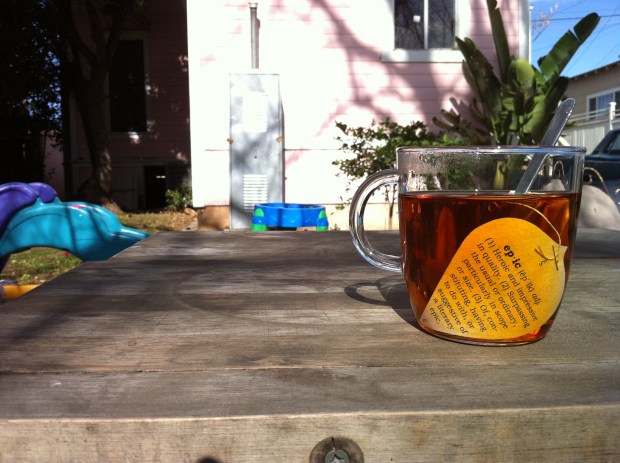 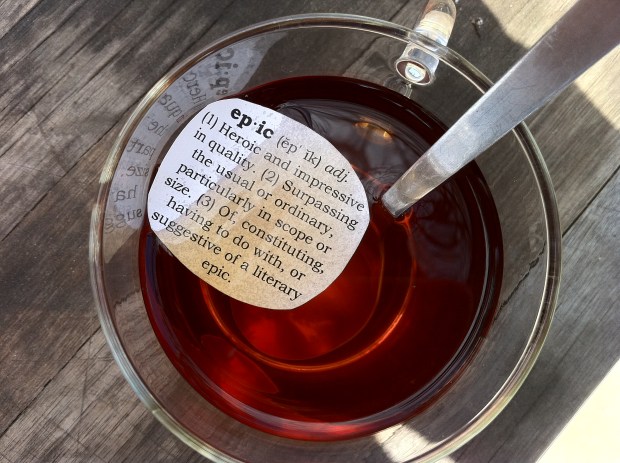 Experimentation is the secret to innovation...most times. ;) 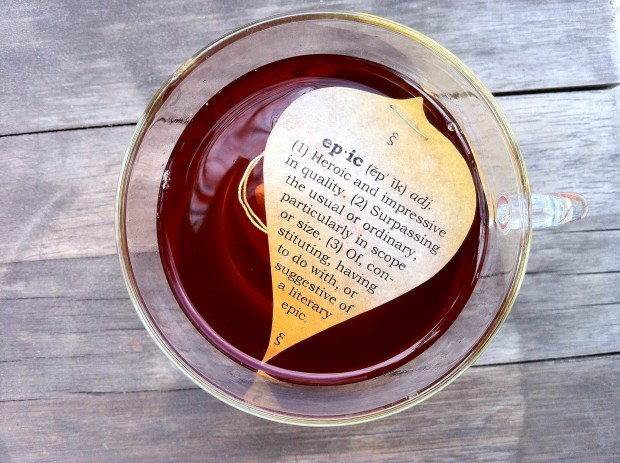 I like this pose. This is the HDR version. 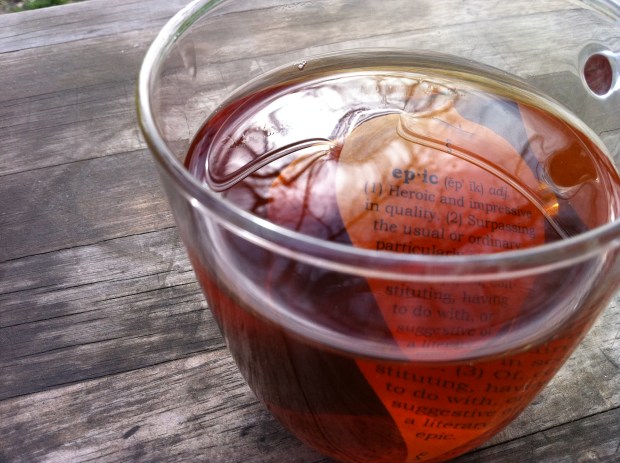 It looks almost poetic submerged beneath the surface. 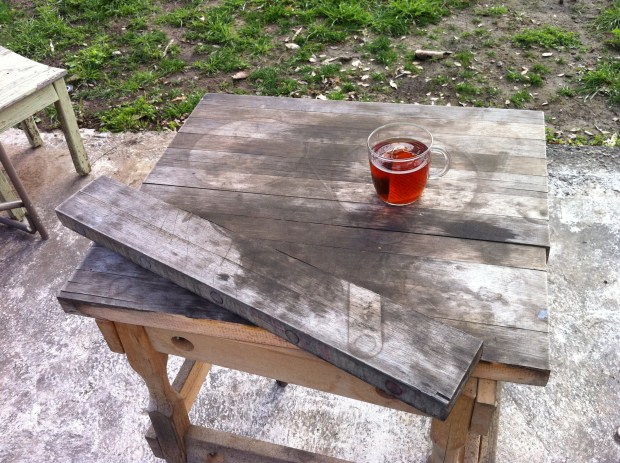 Collateral damage... My big fat elbow leaning on the edge popped the board off. Eep!

Conceptual photography is fun.  I think what made it even more fun for me was that it was simple, no fancy stuff.  I spent maybe an hour in the backyard with my camera phone, and I ended up with a handful of very usable blog headers — yay! — which I will post tomorrow.  Come back and help me decide by voting for your favorite!