My little girl and I got into a spirited debate recently. She is five years old and a born animal lover. If it’s got fur, she loves it. She is the expert. She’s been studying animals her entire life, and she knows her way around a petting zoo.

So we were coloring the other day ago, and she asked me to draw some animals with her. I pulled out a couple of comic books from Ye Olde Comic Book Pile (every household should have one) and drew a couple of my favorite ducks.

When we were done, we both held up our illustrations to show each other.

She, of course, had composed an excellent picture of a cat with whiskers and stripes and eyelashes…because it’s a girl. (They’re always girls. She has no use for boys at the moment. Don’t say it!) It was very beautiful, and I told her so.

But she was not so smitten by my efforts. She took one look and said, “No, those aren’t animals.”

“What? Sure, they are!” I pointed at the evidence. “They have beaks.”

She shook her head. Doesn’t count. Not even close.

I pitched the old if-it-looks-like-a-duck-and-waks!-like-a-duck-it’s-a-friggin-duck rationale.

The Child and Resident Animal Expert was unmoved. “Nope, not a duck.”

We decided to go to the Source.

“Donald is an anthropomorphic white duck with a yellow-orange bill, legs, and feet.”*

Anthropomorphic. Hmm. Not just a duck.

“Scrooge is an elderly Scottish anthropomorphic white duck with a yellow-orange bill, legs, and feet.”

Elderly and Scottish and also…anthropomorphic. There’s that word again.

I checked Merriam-Webster: “Described or thought of as being like human beings in appearance, behavior, etc.”

Holy hot cakes! The kid was right. Donald and Unca Scrooge are people, albeit duck-shaped people, who have to deal with many of the same problems that we do: paying taxes, adventuring to unknown lands in search of mythical treasure, and taking care of pets….

I give her this one, but I still maintain I’m right on the vegetables-are-good-for-you thing. 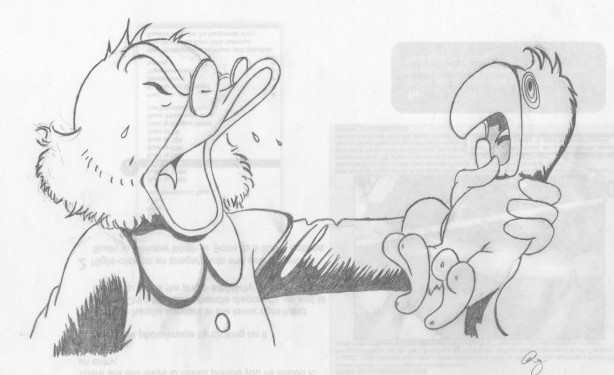 * I left the links in from the Wikipedia excerpts because I rather enjoyed that “white duck” takes you to Pekin duck, which leads one to thoughts of hoisin sauce and green onions…oh, my!

** The top illustration comes from the pages of William Van Horn’s wonderful “The Black Moon” (1993), and the bottom, of course, is from the esteemed Carl Barks’ “The Pixilated Parrot” (1950).

2 thoughts on “DONALD DUCK IS NOT AN ANIMAL”