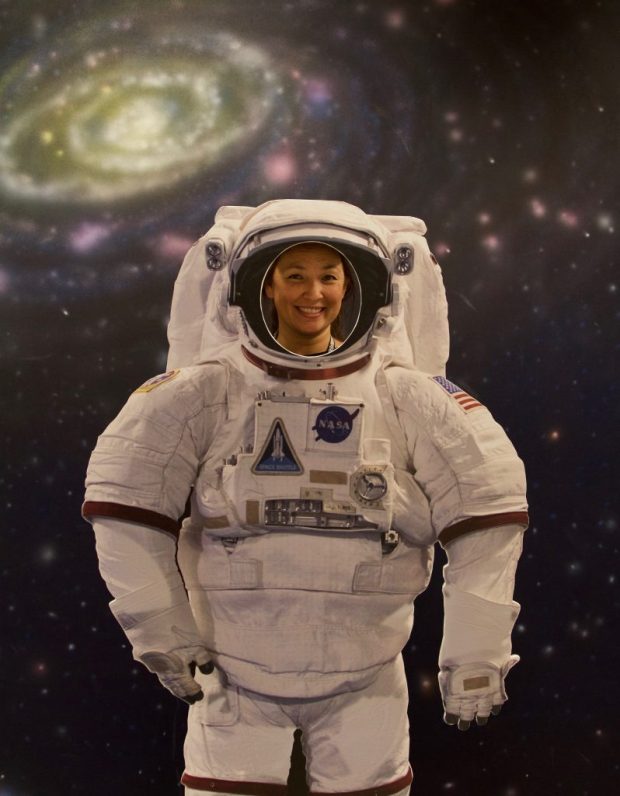 One of the best parts about writing a novel is getting to do research. I believe it’s the author’s responsibility to make research fun, and I do not take that responsibility lightly.

(By the by, if you ever want to experience pure unadulterated paranoia, I recommend researching government conspiracies on aliens and chem trails while smoking a fat doobie in the dark when no one’s home. GOOD TIMES. (So I’ve heard….) )

So a few weeks ago, I was home alone researching government conspiracies on aliens and chem trails and sm- — for my current alien suspense series The Calico Junction Incident, which, incidentally, if you’d like to read for free, click here! — and I came across Goldstone Deep Space Communications Complex located in Ft. Irwin, California, about 40 minutes north of nowhere, about an hour and a half from my house…and they offer free tours!

This goes to show that I may be getting old because I actually lived out at Ft. Irwin for a year when I was 14 and forgot all about Goldstone. It was just another road sign we drove past to get on and off base. I never really looked into it too much, which is funny because I was taking a remote astronomy class at the time. Classic symptomatology of a Clueless Lucy.

Anyhoo, I enlisted my good buddy Ninja Jim to drive out with me to take a tour of Goldstone. (We would have taken my hubby Fat Cat along, but he said NO. Fat Cat is allergic to the desert and road trips.) 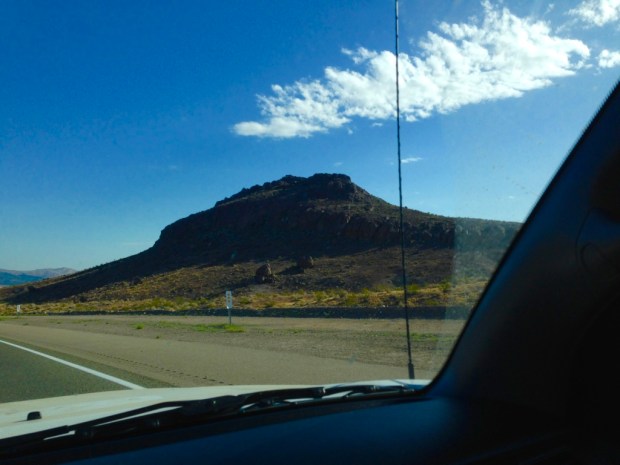 I totally resisted Photoshopping in Wile E. Coyote and the Roadrunner…for now.

Unlike Fat Cat, I love the desert. There is something mysterious and vast and breathless about it that tickles my fancy. I spent high school in the desert. Friends and I have flown kites at night in the desert. I learned to how to ride a horse in the desert. Early mornings and dusk are the best times, and at night, the air feels delicious.

I also love road trips. I love just getting away from my usual coordinates and looking up at the sky from a different point on the Earth. It’s so much fun!

And getting to go on a road trip with my bad-ass friend Ninja Jim while spinning a parallel universe storyline…BONUS. 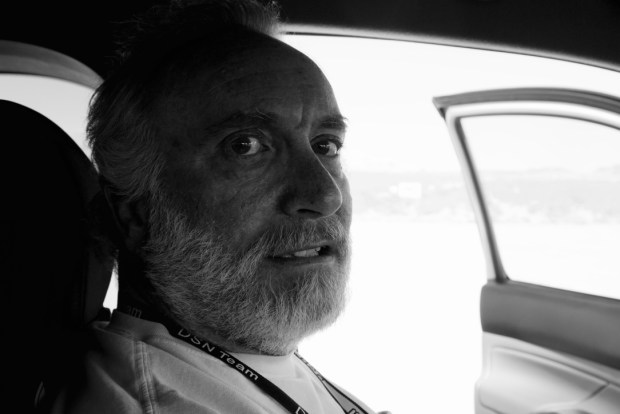 From the cult classic “To Hell and Back with Bad Kale,” Stoning Rolls writer Ang embeds herself as a roadie on tour with one of the most influential rock bands this generation has never heard of. Pictured here is the iconic lead singer Ninja Jim, right before the tragic mosh pit incident that resulted in several fans losing chunks of hair and one fan peeing their pants, effectively ending his performing career before it had even begun.

Let me tell you a little bit about my friend Ninja Jim. Jim is a legend. We met at a bar back in the day. That sounds edgier than it really was…so I’m just going to leave it at that.

But at the bar, he was known as Dreamsmasher, The Ruiner, and Fuzzy Bunny. He is also the co-founder of the made-up band Bad Kale. He’s a photographer, a gemologist and jewelry-maker, an artist, and he doesn’t digest orange juice very well. He’s also one of the best friends a gal could have.

Today, he was the Captain of our desert ship, piloting his truck through the badlands of the Mojave Desert, beyond the far reaches of Barstow, and across the 10-mile stretch to Ft. Irwin. 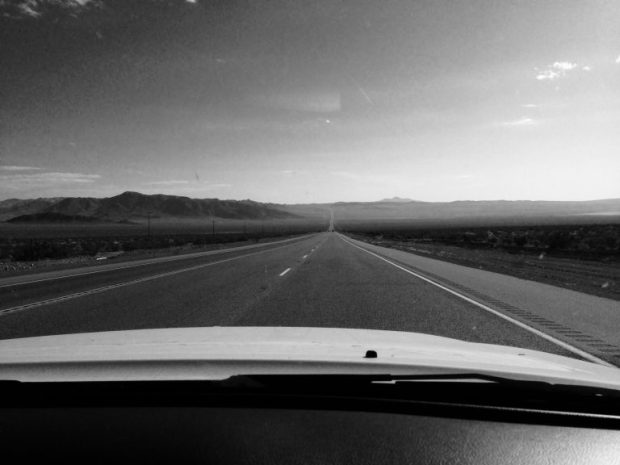 From the Stoning Rolls article: “The road to hell was a lonely one. Only Fate knew what was in store for us. All I knew was that for Bad Kale, there was no turning back…. The nearest restroom was 10 miles ahead and I had had a Big Gulp the size of an Olympic swimming pool….”

*At this point, I should note that for anyone interested in touring the complex, you can get all the info here. Keep in mind you have to arrange a date at least three days in advance, so plan ahead. It’s super easy. I just emailed, and Leslie, their awesome and friendly point of contact, got back to me right away with available tour dates. 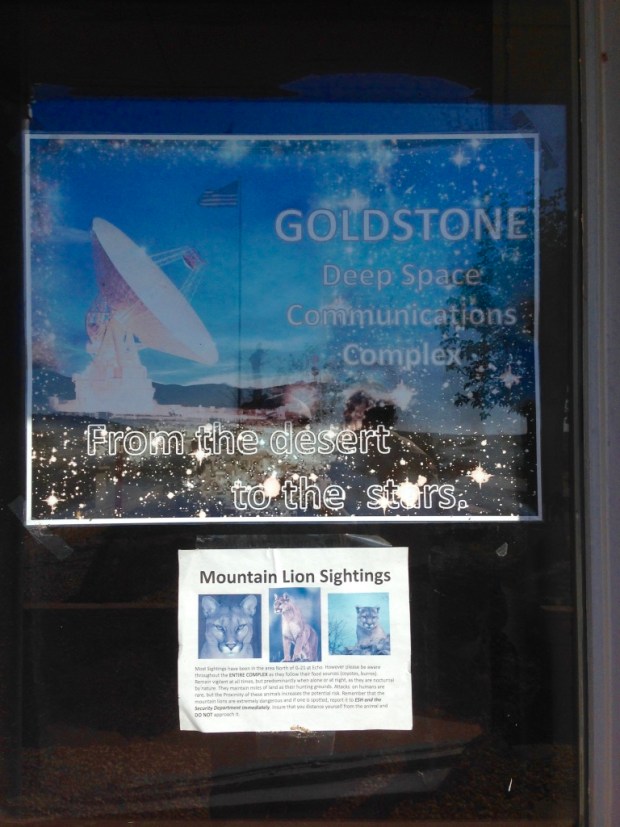 Sun-faded posters in the Goldstone gate window. Watch out for mountain lions. Restroom inside — thank goodness!

We were instructed to wait by our cars at the gate for our tour guide. While we waited, I took in the motley crew of folks who traveled all this way to look at a bunch of giant radio dishes pointed at the sky in the middle of nowhere. There was just a handful of people: one old dude with Connecticut plates  and two families with excited kids who knew more about the Deep Space Network than any of us adults.

Before long, Leslie, our friendly and knowledgeable tour guide, arrived via car, and we were instructed to follow her on in!

And so began our strange caravan across the alien landscape of Goldstone. We spotted Echo antenna and the main museum facility as we drove past towards the first stop on our tour… 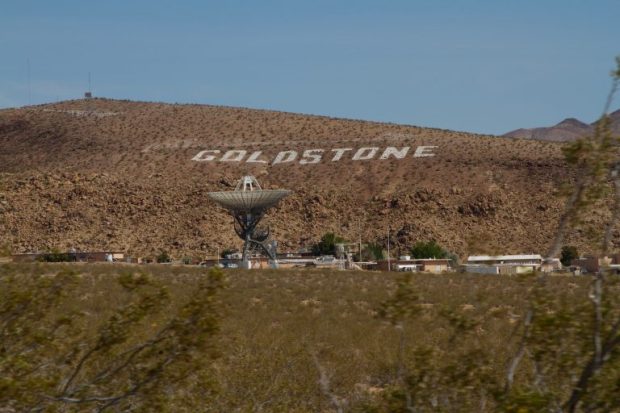 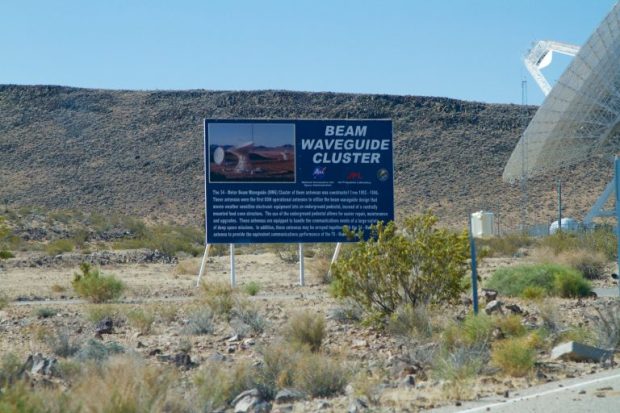 It was kind of surreal driving through desert and seeing these massive structures sprouting up like giant and wondrous mechanical mushrooms. 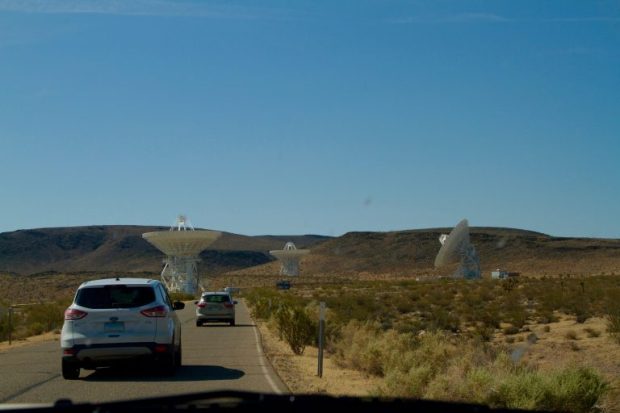 Once we had all parked and gathered round, our tour guide Leslie commenced the tour, explaining the various space objects these immense radio antennae track and how Goldstone works together with the facilities in Canberra, Australia, and Madrid, Spain to form the Deep Space Network.

It’s one thing to see these structures in pictures. It’s an entirely different experience standing next to them. 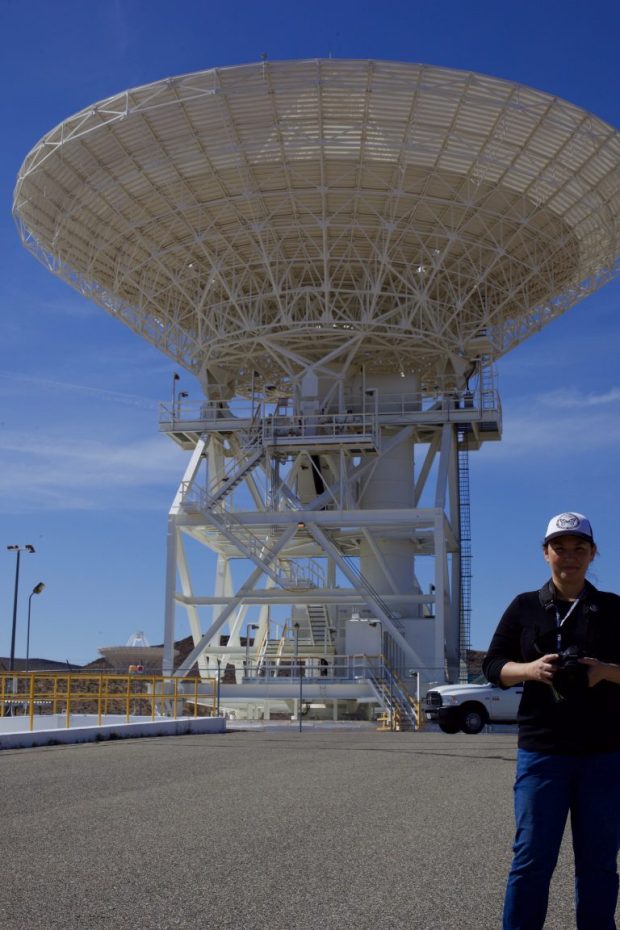 Radio Antenna in my reality… 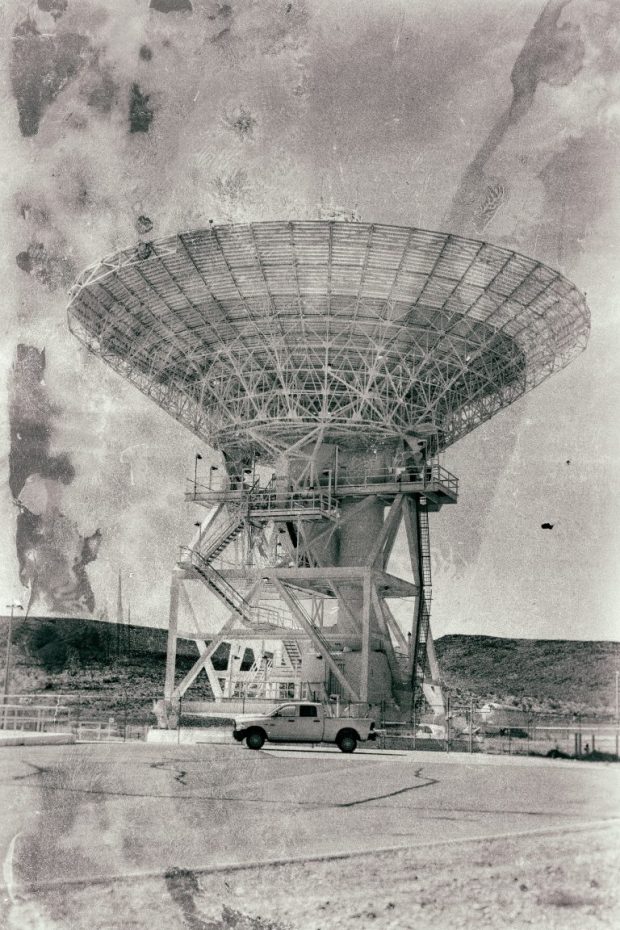 …and in Ninja Jim’s reality. (I told you he was an artist photographer.) (Copyright (c) 2016 by Ninja Jim – All rights reserved)

Leslie also explained the strange inhabitants hanging around the station. The place is lousy with burros. Apparently, they did quite well in the desert despite expectations, and now the base is having to catch and sterilize the males to keep the population in check.

They’re cheeky little fellows and paid no mind to us or the honking trucks. 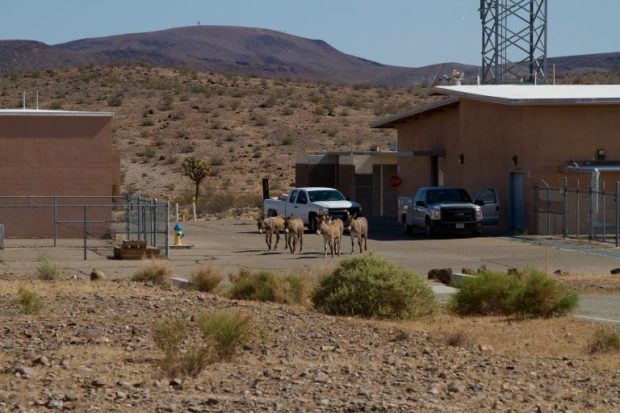 Then it was back in the car to head over to Mars Station! 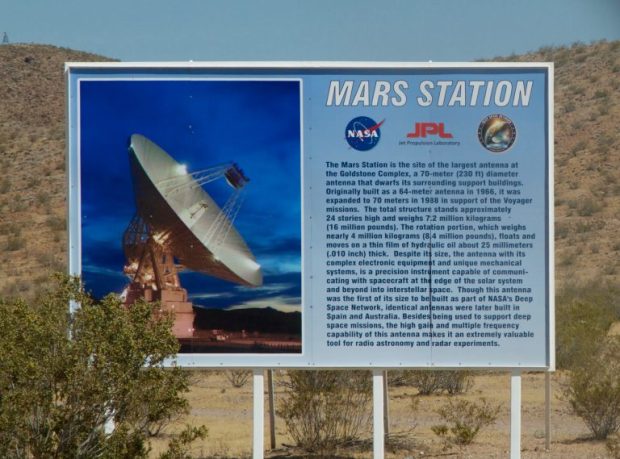 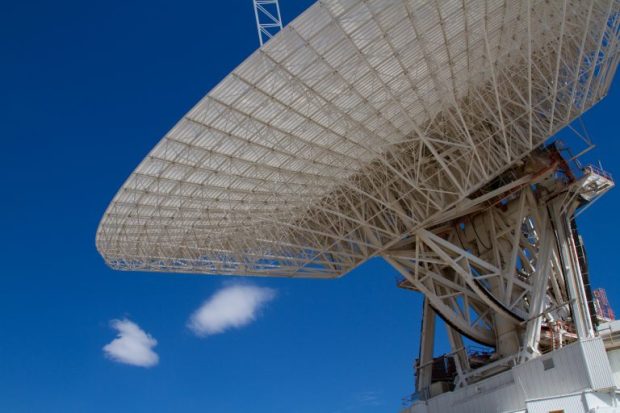 Gazing up at this massive dish that is almost the length of a football field, I wondered aloud if it was big enough to call Ninja Jim’s home planet and have them send the YoMama Ship to come pick him up. He told me to shut up. 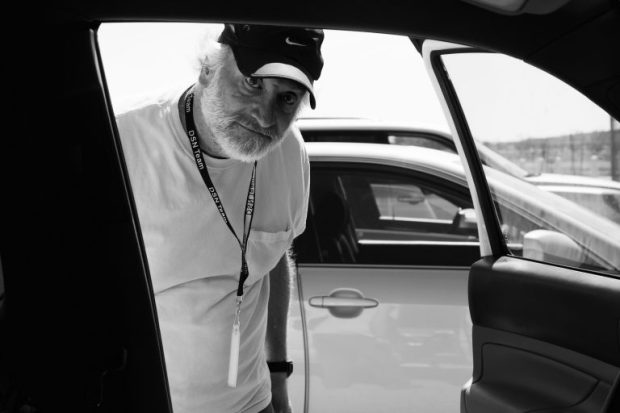 I informed him with an attitude like that, it was no wonder YoMama Ship left his beheinie on Earth in the first place.

A quick tour through the live monitoring facility (which unfortunately did not allow cameras, but looked exactly like the control rooms in the movies!), and then it was time to climb back into our vehicles to head to our final stop, Echo Station, where we got to check out the museum and pick up NASA bumper stickers. Win! 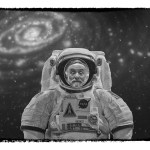 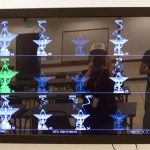 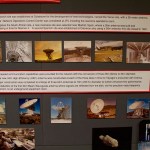 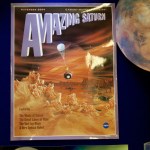 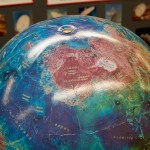 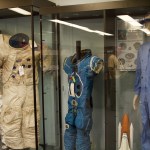 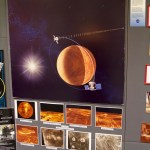 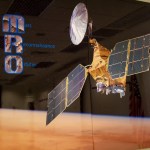 If this post seems a little jumbled and chaotic, that’s because there was just TOO MUCH TO SEE. The museum was an awesome collection of memorabilia, interactive antennae monitoring, and giant infographics. It’s incredible to me that a place like this even exists. Most people don’t even think about what it takes to send a spacecraft into space and communicate with it, but out there in Goldstone, 130 employees clock in each day to maintain and monitor these massive structures to keep track of the exploratory space vehicles we’ve sent out into deep space. It’s an extraordinary effort that continues to evolve to this day. I was more affected by it than I expected. I was just as star-struck as the kids I stood next to. 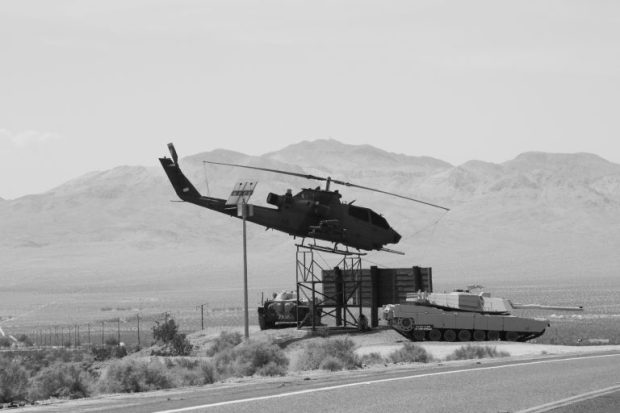 “We headed back out on Devil’s Highway accompanied by black helicopters and CIA spooks, the truth weighing heavily on the band. It would take months of spin doctoring to climb Bad Kale back into the good graces of the desert folk, who mostly wanted assurances that they would no longer be subjected to Bad Kale’s signature polka rap (as was highlighted and put in all caps in the restraining order). Ninja Jim would never again play the accordion in public. It turned out to be a devastating blow to the polka rap community, and this reporter worried that the incident signaled the beginning of the end for Bad Kale and its misunderstood front man Ninja Jim….”

As we left the base and headed back to Civilian Land, I wondered where humankind will be 50 years from now on that whole faster-than-light travel deal or even anti-grav personal vehicles, and whether or not orbital space tourism will have taken off by then. Will the existence of aliens finally be revealed by governments around the world? If so, how many of them will turn out to have been hiding in Hollywood all along?

The only thing I knew for sure was that all these questions were making me hangry. It was time to eat. 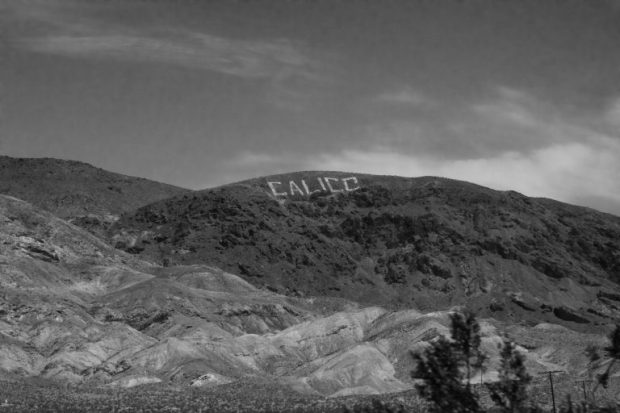 And what better place to stop and eat than at a ghost town? That’s right. Good ol’ Calico! 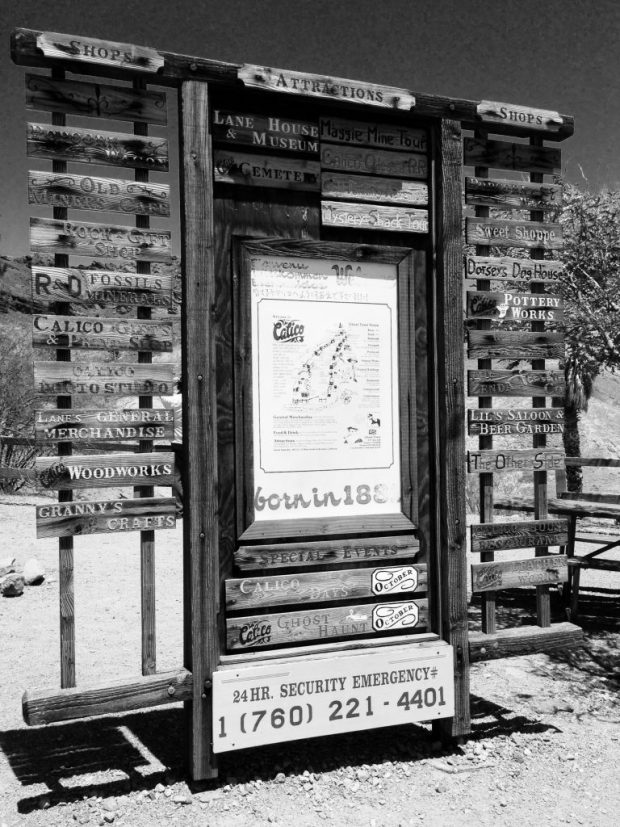 We ate at the Calico House Restaurant amid a busload of German tourists. Lunch was reliable Americana cuisine with a choice of tater tots as a side and several sweating mason jars filled with ice cold raspberry tea. 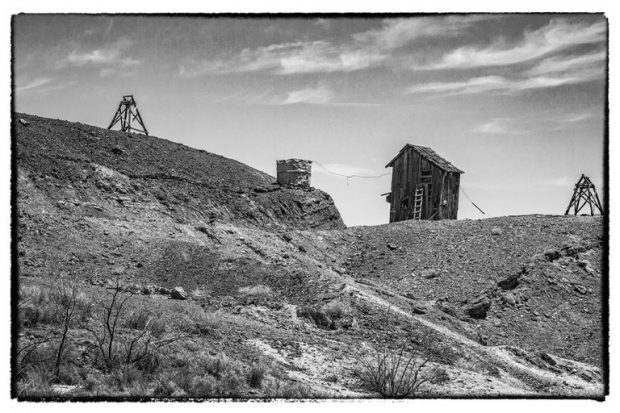 “Nonplussed by Bad Kale’s crash and burn in the desert, Ninja Jim furiously made notes on his Calico House Restaurant napkin, notes that would eventually become his greatest album yet: ‘My Heart is a Ghost Town.’ The first day of its worldwide release, the album was downloaded 17 times, its lead track “Greasy Carrots” 18 times. Bad Kale was back!” (Copyright (c) 2016 – Ninja Jim)

It was too f***ing hot to explore Calico appropriately. It took three and a half mason jars of tea to rehydrate me enough to be able to leave the restaurant. (I had apparently forgotten how friggin’ hot and dry the desert is.) Ninja Jim was pretty done too.

We wandered around the lower half of town — mostly because we were too lazy and old to climb to the top and check out the silver mine — then climbed into the car to head home. It was only 1:00 p.m., but it felt like we had traveled to another world and back.

As I drifted in and out of consciousness on the way back trying not to snore or bang my nodding head against the passenger side window too much, I dreamt of alien spy satellites and ghost town vittles and really bad song lyrics.

And that, my friends, is how I do research. 🙂

What the heck is all this research for? Why, it’s for The Calico Junction Incident, my new alien invasion suspense series. If you like UFOs, strange desert towns, and government conspiracies, then you’re gonna dig this.

For a limited time, you can get the entire series for free in your choice of .mobi/Kindle, ePUB, or PDF format. Just enter your email below to receive your free digital copy of the first episode Kill Team, and you’ll automatically be sent new episodes of The Calico Junction Incident before they are available to the general public, six in all! 😀