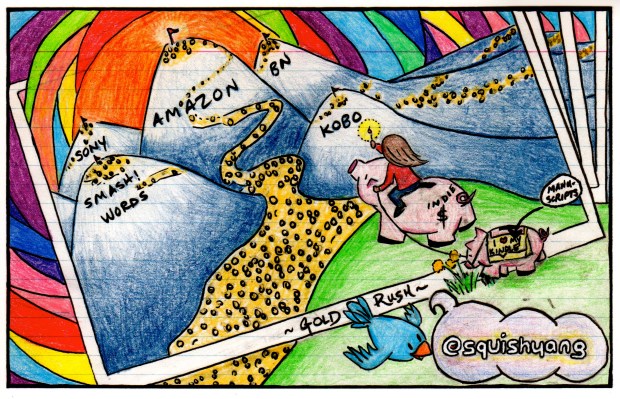 "The New Gold Rush" by Angela McConnell ~ Please share and link back! ~ This artwork is available under the Attribution-NonCommercial-ShareAlike Creative Commons license and was filmed before a live studio audience ~

~ I Was Raised Traditional Orthodox ~

As a teenager I fed voraciously on my monthly issue of Writer’s Digest, and I read to pieces my copy of Richard Curtis’s, “Beyond the Bestseller: A Literary Agent Takes You Inside the Book Business.”¹ Nerdy reading for a high school kid, I know, but I loved it, and I wanted to learn everything I could about the publishing business.

So from a pretty early age, I knew about the consignment system, discounting, payment upon acceptance, the notoriously long and complicated journey author’s royalty checks must travel, payment escalators, the advantages of having an agent, and the like.

As you can probably imagine, I felt pretty entrenched and invested in the traditional publishing model. Hell, I didn’t even think of it as a model. It just was the only route to becoming a Successful Writer (ie., finding an audience and earning an income). I certainly didn’t want to deal with the stigma of self-publishing, driving around with a trunk full of books and pressing a business card into the hands of every person I came across.

After high school, I spent the next *mmph* years working on my craft and reading about query letters, novel proposals, and sales pitches. I also read a lot about author etiquette, how to appropriately approach agents and editors at conferences, how to respond to rejections, and how long one should wait before following up on a manuscript request. Folks in publishing were rock stars in their shining towers on Fifth Avenue, and agents stood at the door behind the velvet rope checking your name against some Cosmic List of Good Luck Shines Down Upon Them.

It never bothered me that this was the case. That was just how it was, and there was no point worrying about it. I just knew I needed to write a damn good story and play by the rules of the game. Hopefully, I’d sell a short story to a market notable enough that would get my foot in the door with a great agent, who would introduce my work to an enthusiastic editor of a publishing house willing to invest in me. What else could one do but keep writing and keep hoping? Sally forth! and Tally ho! and all that rot.

But then Amanda Hocking happened. A regular Josephine who writes great books managed to bypass the velvet ropes and long queues in Manhattan and climbed to the top of the heap by herself, without the benefit of a publisher, using only Twitter, duct tape, and two “AA” batteries. Rags to riches. It’s a great story. The best part is it’s true. (Except the bit about the duct tape and two “AA” batteries.)

But Hocking wasn’t the only one scaling the heights of the Kindle Top 100 Lists. Don’t believe me? Check out this spiffy table (created by Derek J. Canyon) of last December’s Kindle sales figures of 26 indie authors (compiled by Michael J. Sullivan).

Around this time, Irish writer David Gaughran was not only inspired to try out self-publishing for himself,² but he built a hugely popular platform for the indie movement in a very short amount of time, resulting in the successful launch of his popular ebook, “Let’s Get Digital: How to Self-Publish and Why You Should.”b

In the Introduction, Gaughran writes of his own conversion to Self-Publishing:

“I have written a couple of books and several short stories. I spent 18 months sending queries to British and American agents, collecting more than 300 rejections before coming to my senses and taking back control of my life. I still remember the day: Sunday April 3, 2011. The day my life changed forever. The day I decided to become a publisher.

“I had been in bed with the flu all week and spent most of the time coming to terms with the changes in the publishing industry. Barry Eisler had just walked away from a $500,000 [advance] to go it alone, and self-publishing star Amanda Hocking had just signed a $2 million deal with a New York publishing house. To me, these two developments, while in direct opposition to each other, were proof of the bona fides of self-publishing.”

I will remember that week. It was like someone flipped on all the floodlights. Writers were blinking in the sudden illumination and hope, going, “Wait, what? Really? Really? And I can do this too?”

My own reaction was to read every single post on Hocking’s blog from Day 1. Then I followed the links to the successful self-published writers she had learned from and read those writers’ blogs. I became a regular attendee at the Church of Konrath and quickly converted to Self-Publishing. And believe me, I’m not the only one by a long shot. A quick Google search will reveal thousands and thousands of indie author blogs promoting self-published titles and sharing tips and insights from their own self-publishing experiences.

Yep. No doubt about it. We are witnessing a digital gold rush, a mass conversion of faith. It’s an exodus to the New Promised Land, a crowded, noisy, huge parade of writer-rock-star-hopefuls…and the best part? You’re invited.

But what about this New Promised Land? you want to know. What’s it like?

Well, walk with me a ways, and I’ll tell you all I know…tomorrow. 😉

¹ I don’t know how many times I’ve read “Beyond the Bestseller,” but it’s a lot…and I still love this book. It may be nonfiction, but Richard Curtis tells good stories — each chapter/essay is graced with fun anecdotes and mischievous humor — and he’s just a delight to read. He is on my list of Dream Agents. We would be great friends, Richard and I. Any agent willing to dress up like the Swami of New Deli with a kosher salami slice in his turban for a client is someone I would want representing me. 🙂

I should also note that Curtis is incredibly forward-thinking and has led the charge into the digital frontier. In 1999, Curtis started E-Reads™, “the oldest independent e-book publisher in the field and an innovative leader in the modern book industry.”

² David Gaughran has two enjoyable short story titles available on Amazon: “If You Go Into the Woods” (which also includes bonus story “The Reset Button”) and “Transfection.” His self-publishing guide, “Let’s Get Digital,” is also available as a free .pdf from Mr. Gaughran’s website. This is excellent reading for the writer considering joining the ranks of the Indie Parade.

One thought on “LOSING MY RELIGION, PART 1: A CONVERSION OF FAITH”