After a good night’s rest following our march around Rome proper, we were ready to catch the train up to Venice and — that’s right, baby — Carnevale!

But not before, ya know, fueling up again at our new favorite place, Pompi’s. 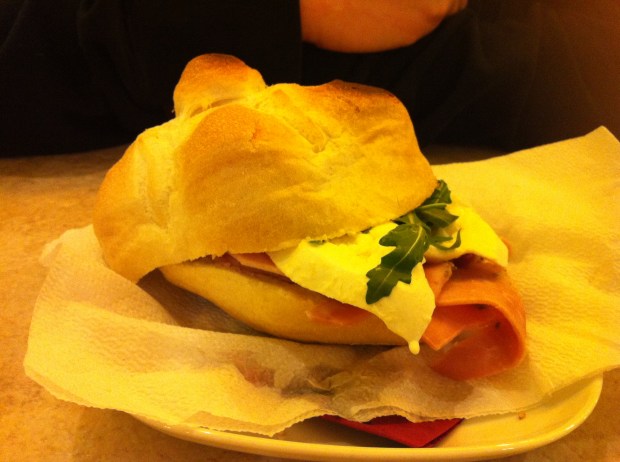 My brother kept missing the boat on pizza there — they kept selling out — but he was never disappointed. (In the days to come, he would eat more great pizza than he could shake a stick at.) This lovely Roman morning, he consoled himself with a ham and fresh mozzarella sandwich. I know you’re looking up at that little drip of cheesy goodness. I know you are because I can’t look at this picture without staring at that little drop of happiness myself. 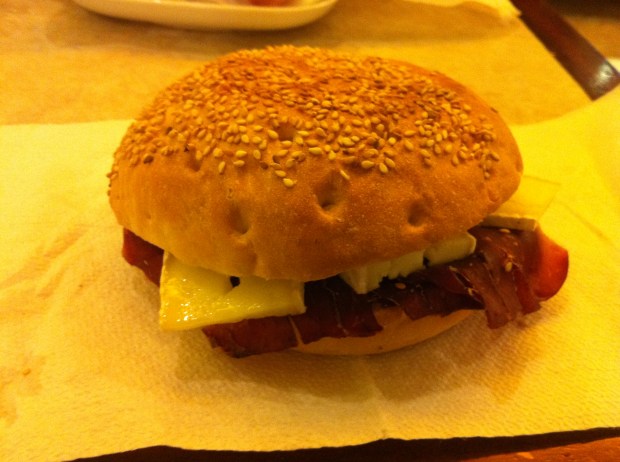 I am an almost tragic creature of habit. Having had the best in my life just a mere 24 hours earlier, I can’t help but bark up the same tree. Cured ham, warm brie, sesame-seed-festooned fresh bread — poor me!

Of course, no Roman day is properly begun without espresso. I went for the marocchino, espresso with frothed milk and cocoa powder.

Oh, Starbucks, I loved you so…surely my receipts prove that. It’s not you. It’s me. I’m just in a different place right now. (Yeah, fucking Rome!) 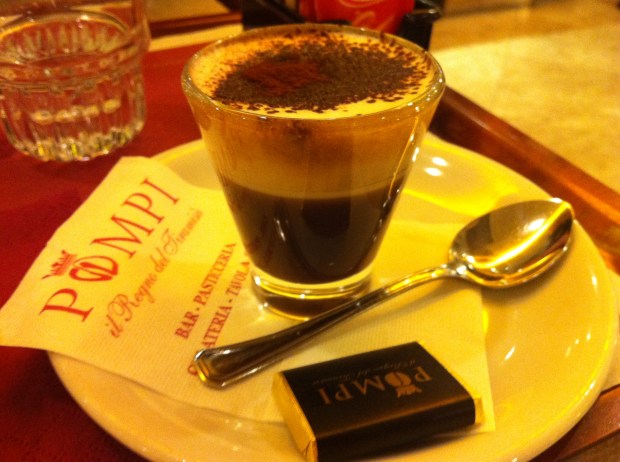 But now we were off to fucking Venice! To the train station!

I had to snag a shot of Game Stop for my pal C-Lao…should have put in for a transfer, dude! 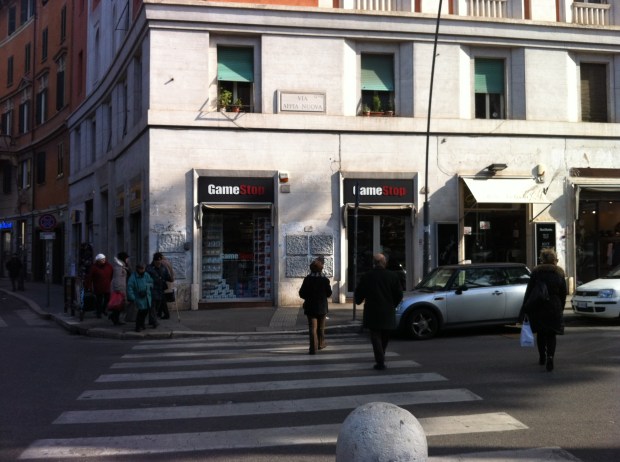 And I had to include a shot of the McDonald’s for all my friends (and there were many) who threatened to disown me if I ate at one while in Italy. Ladies, please! 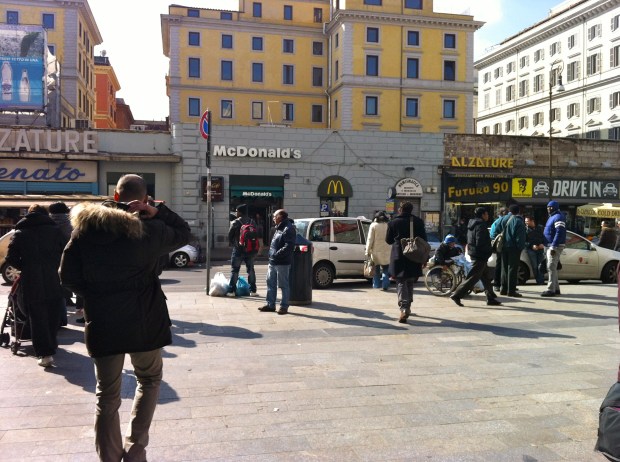 After taking the subway the wrong way, getting off and taking it the right way, discovering that we could have taken the subway from the airport at a tiny fraction of the time and cost of the shuttle, getting to the train station, waiting in line for 30 minutes to buy train tickets we could have gotten from one of the kiosks, paying €1.50 to wee (a preview of wee expenses to come), we were finally on our way. 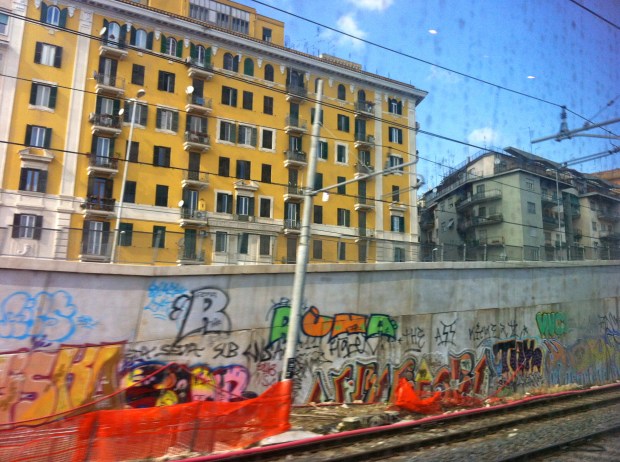 The Eurostar trains travel up to a blistering 186-mph, and make Southern California’s Metrolink look like an old lady on a two-wheeled tricycle. The trip from Rome to Venice takes only three and a half hours. It’s a little unreal at first seeing the landscape blur by at warp speed, but then you just start seeing the landscape. 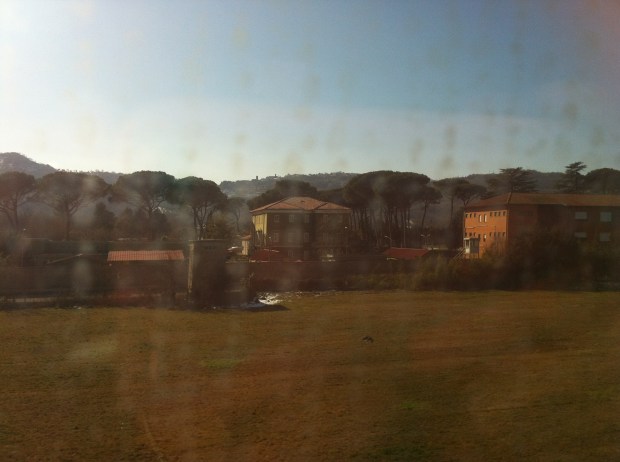 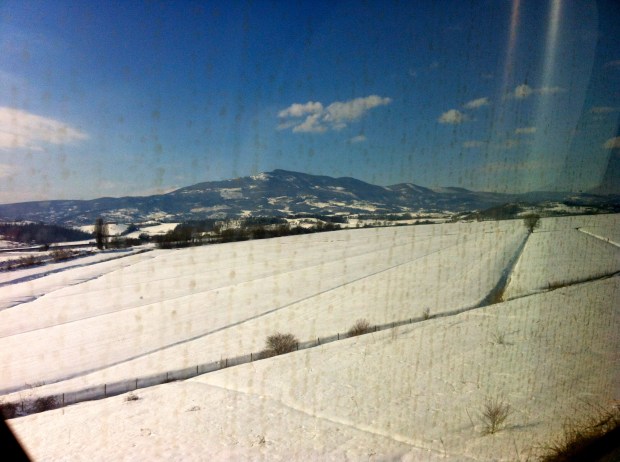 A couple of weeks before we arrived, Rome received its first snow in 25 years! We saw only dirty bits and patches of it in the few shadowy places of Rome, but as we moved north, the landscape became a winter wonderland… 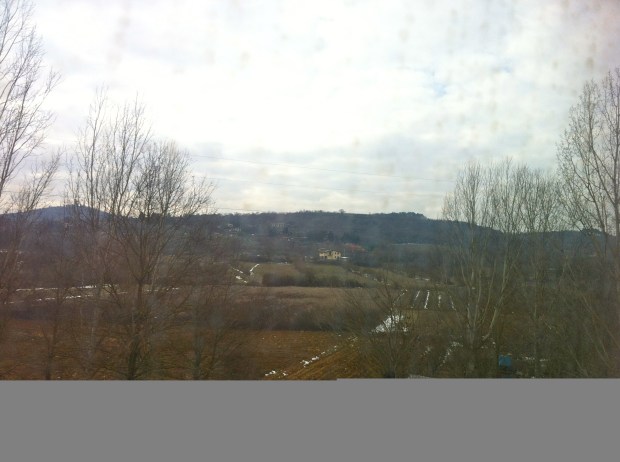 …only to fade away again.

We met two Americans on the train. Students studying abroad, they were headed up to Venice for Carnevale as well. The young man said nothing, but nodded and smiled pleasantly while glued to his netbook while his more gregarious traveling partner bemoaned the lack of wi-fi on the train (she had an assignment due that day for an online class), praised the progressiveness of the Dutch (Amsterdam was great!), and the primitive-ness of French thinking (having spent a month in Paris without being able to score any weed). She was much more optimistic about their chances in Venice. We wished them buona fortuna. 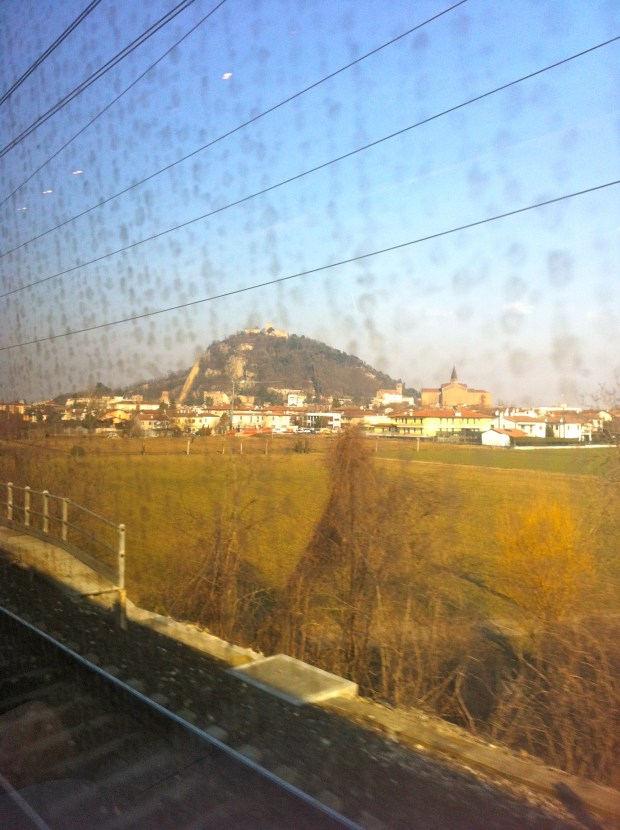 There’s something magical going on between Italy and the sun. It certainly does seem to favor her.

Lulled to sleep by the passing golden landscape, I managed to completely miss the crossing from the mainland into Venice. But here’s our first view of Serenissima coming out of the train station. 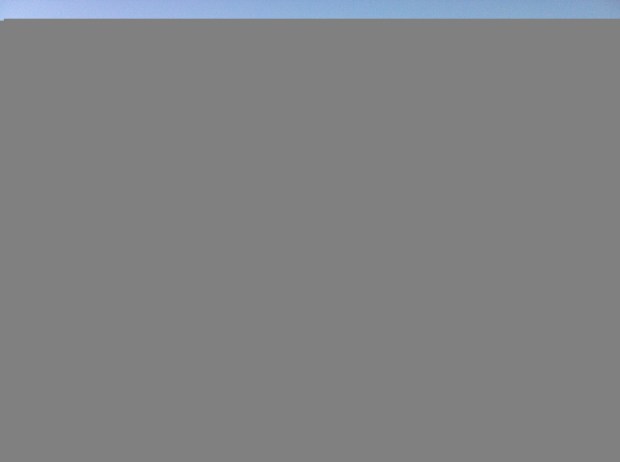 This is pretty much the last time we knew for sure where we were. For the next several days, we would be undeniably, unavoidably, unforgettably, and thoroughly lost.

3 thoughts on “ROME TO VENICE”