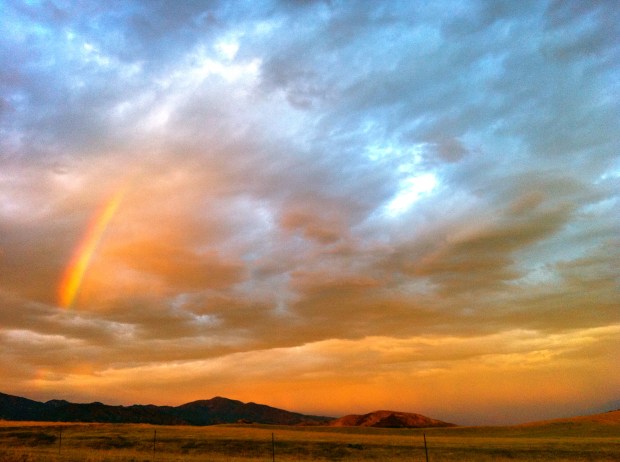 It rained the other day. Just a little. Just enough to dampen the street and remind us Southern Californians that there is more to life than summer. I am just as surprised as everyone else.

So I checked, and it turns out the rumors are true. It’s September. Time to scuff up to the carpet and explain what happened to me, where I’ve been.

This happens every year. January through May, I’m laboring away, breaking up stones along the banks, high on the ambitions of a new year, usually on a diet… Suddenly it’s June, and I’m floating face-up in the lazy currents of summer I-spying animals in the clouds.

Even so, I’ve missed you guys! Please accept my humble apologies for falling away from the blog. It was not deliberate. Honestly, I thought about you guys every day, how I needed to remember to tell you about this or show you a picture of that. But don’t worry. I took notes. We’ve got plenty of time to go through the slide show. 😉

But we’re here…now…together…properly bathed and groomed. I assume we both have a cup of tea in hand. So let me tell you what I’ve been up to, and I hope you’ll drop me a line in the comments and let me know how your summer went.

I gotta be honest: this was one long-ass summer. In a way, it feels like two different summers.

On the one hand, it was the summer my daughter was 2 and half, our third summer together. She’s never going to be 2 and a half again. For this reason alone, I will always remember this summer with great nostalgia, reimagined through huge Ray Bradbury lenses, sepia around the edges…all her milestones and surprises, all the petting zoos and souvenirs and Bambi boogers, kite-flying at the beach, the hugs and kisses, duck-dodging at the lake, defending ourselves in the Great Black Widow Infestation….

Dada got to come home on leave for a month, much to the Toddler’s delight. She thinks he lives on an airplane. I miss Fat Cat, too. I keep reminding myself it won’t be long before these separations fade into the past, and we’ll remember the difficult times with much affection…mostly for having gotten past them. 🙂

But we do all right, the three of us. Dada is working hard, staying busy, looking forward to looking back at this time with affection. 🙂 Although we miss Dada fiercely, me and the Toddler get along swimmingly, laughing and arguing like an old couple…and it suits me just fine. I love spending long summer days with her, and I am mindful and grateful that I am living the life I dreamed of when I was younger.

So that’s the summer that’s on the books, the summer my baby girl will remember.

But there’s another side to this Gemini summer, one experienced only by me while everyone else slept. It was during this shadow summer, a series of endless midnights spent at my desk, that I dreamed, planned, schemed, wrote, and read, read, read!

See, back in January, I declared this to be the year. Of course, I do that every year. But this year it’s different somehow. I can’t explain it. I just know that this is the year I start my writing career, one that I will be proud of. Something big is going to happen this year.

So, anyway, I started out strong, blogging every day for a tiny audience of 7. I kept telling myself, if I build it, they will come. Having only a vague notion of what a platform was, I decided I needed to revamp my blog, make it more professional. Of course, that meant I needed a cool blog header.

On January 27th, I conducted an “epic” photo shoot and blogged about it. The next morning, I woke up to discover I had over 200 hits. At first I thought it was a mistake, but it turned out my post had been selected to be featured on WordPress’s Freshly Pressed page. Over the course of four days, I got close to 4,000 hits thanks to WordPress’s editors.

Talk about a kick in the pants! Fire down below! Running downhill! Get the hell out of my way!

That felt good! I walked around the house like I was going places, swaggering like a rock star. Good thing I didn’t shoot for rockdom. I think even a crowd of 20 cheering me on would make my head blow up so big I’d have to be rolled off stage. (Plus, I don’t think I’m hardy enough to do all those drugs…though come to think of it, I wouldn’t mind giving it a go…the singing bit, I meant.  😉 )

ANYHOO, as my 15 minutes of digital fame waned, I settled happily into writing and blogging. I had a core group of 30 wonderful readers by then, and I was really enjoying myself, trying out new and silly things.

But I must confess, at this point, I wasn’t really sure what I was going to do to achieve my epic dream. I wasn’t even exactly sure what my epic dream looked like. I mean, some things I had a clear vision of, like my name in large font across a book cover, a big fat smile on my face with palm trees in the background, maybe a nice tan.

But the path to get there wasn’t clear to me. I had it stuck in my head that the way to a successful writing career was marked by a well-done debut novel published by — well, a big-name publisher. If I was diligent and lucky enough, maybe I would sell a couple of short stories along the way to respected markets to help my chances of attracting an agent, an editor, and ultimately a publisher for my novel.

I’m sure this is nothing new to any of you writers out there. This is actually the standard template passed out to all newbies. The secret to publishing success can be summed up with this equation: (Writing+Editing+Reading)(∞) + Lotsa Luck=NYT Bestselling List.

You’d think this would make it easy. To become a successful professional writer, all I have to do is write, submit, and wait. Everything else is out of my control, so why worry about it?

Well, I’m a woman. This whole notion of lack of control over my own career and not worrying about it runs counter to my feminine nature and only makes me want to pinch someone’s head off. Even so, that doesn’t change the actual work of a writer.

So I kept writing. I submitted a couple of short stories. Nice comments, no bites though. And I kept working on The Novel. It’s all I could think of to do, but I still had a niggling feeling something big was going to happen.

Then in March, Amanda Hocking happened. 26 years old, self-publisher, sold basically a million ebooks on her own, making her own brand of epic happen. And she wasn’t the only one, not by a long shot. There’s JA Konrath, Stephen Leather, Blake Crouch, Bob Mayer, J Carson Black, John Locke, Michael R. Hicks…the list of newsworthy authors goes on and on. And there seems to be no shortage of up and coming indie writers. Blake Northcott, David Gaughran, Bernard J. Schaffer, and Moses Siregar III, come to mind off the top of my head.

Thus, I was recruited to the indie revolution, called to arms, and joined the Resistance Front. I spent the blue hours of summer in front of the computer (and under the covers with my iPhone) reading, reading, reading…just stuffing my eyeballs full of new ideas and concepts. I signed up for Twitter and Facebook and dreamt in feeds. I skulked about forums and blogs like an alligator, my eyes just above the water, my fingers taking notes below the surface, watching, trying to learn as much as I possibly can.

And I began to prepare. I changed my business plan, my writing priorities, my entire definition of what a successful writer means. I am learning so much. Frankly, my mouth has been agape all summer, I kid you not. There are so many smart people out there. I can’t wait to introduce you. I’m sure my neighbors can attest to squeals of delight and excited applause carrying through my office window at night.

Finally, after a long summer of cultivating possibilities, it is September…and I can’t wait to show you guys what I’ve been up to. I have the same feeling I had when I wrote that epic post. This is what I wrote:

“Perhaps it’s a silly little coincidence, but when I first saw it, I had a sense of magic, of things shifting into place.  I don’t know how to explain it better than that except that it happens from time to time, and it’s never failed me before.”

I drove up Banning Ridge the other day convinced I would find a rainbow even though they’re about as common as kangaroos around here. It’s just that the clouds looked so right, and the sun was trying so hard. I drove all the way up to the top of the ridge and…nothing.

But on my way down, just before sunset, I found what I was looking for. 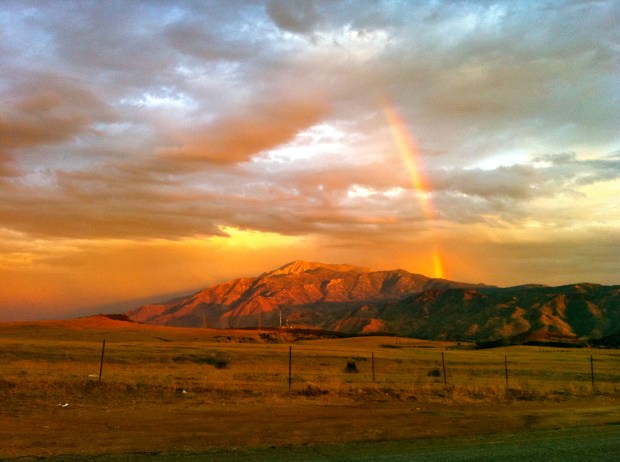 2 thoughts on “THE SUMMER I DREAMED OF EPIC”