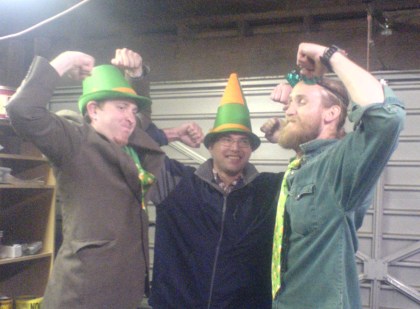 I remember being transported by Madeleine L’Engle’s “A Wrinkle In Time,” when I was younger, to the gray planet of Ixchel, along with the main character young Meg, and being dumbfounded alongside her at the prospect of explaining the concept of sight to blind Aunt Beast.

Out of all the wonders in Ms. L’Engle’s book, this was the one thing that dug into me, leaving me appreciative and humbled by the small miracles of our senses.

Now that I have become a mother (still new and amazing to me, for I feel I have slipped into a parallel dimension, one that is a little newer and a little brighter with the added new future of my little one), I have another deep-reaching question: How would you explain sense of humor to a being who didn’t laugh? Hell, how would you explain laughter? (Of course, the very idea of a creature who doesn’t laugh is…well, laughable. I mean, even dogs laugh.)

So how do you explain the concept of laughter? It’s an odd mix of joy, really. It’s difficult to explain without using the word “humor.”

The reason I ask is this: Puppy is starting to laugh.

Since she was born premature, most of her time in the hospital was spent sleeping, her parents’ faces watchful ovals behind plexiglass, hopeful to catch a glimpse of those random crooked smiles.

However, in the last few days, she’s been smiling with purpose, responding to my silly faces and dramatic story-tellings. But it’s still a new thing for her, something that has been gaining momentum these past several weeks.

It snowballs into tiny baby giggles at night, when she’s asleep, nestled in her spot between my husband and me. In the soft orange glow of the night light, I can see her. Although her eyes are closed, her lashes curved into dark crescents of sleep, her face is alight with a smile so radiant I can’t help but reflect it back with my own smile. It’s like smiling at the sun; it brings tears to my eyes.

And she’s giggling. In her sleep. Little titters and chuckles. I shake my husband’s shoulder, but by the time he pulls himself from the depths of slumber into semi-consciousness, the moment’s gone.

I wonder, what on earth could this tiny child, in her seemingly limited life experience, be dreaming about that she finds so funny? If she could tell me, would I understand? Maybe baby humor is different than adult humor.

Having a preemie lends itself to a lot of worry over whether or not things are developing right. The doctors have been diligent about testing her reflexes, her sight, her hearing, all of that. But they don’t have a test to give a newborn for her sense of humor.

This is one of our most crucial senses, one which can determine whether a child will grow up to succeed in the world, recognize happiness in her life, overcome hardships, make long-lasting friendships.

So in wrestling with the question of humor and how to explain its complexities, I haven’t come any closer to a satisfactory answer. But I bear eager and humble witness to the flowering of my daughter’s own sense of humor. And like any parent, I hope that hers will be big and robust, strong and healthy, complex and smart.