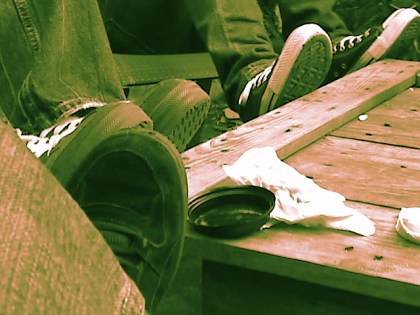 Our writers’ group held our third meeting this past Sunday.  As always, there was lots of food and laughter and conversation…maybe too much conversation.  But there’s definite signs that evolution is occurring.

Already we have gained and lost members.  It’s hard to say whether we have our core group already, or if it will change again.  Knowing how human nature, life, and Murphy’s Law seem to conspire with one another, I assume it will change some more; but I think for the most part, we’re getting down to a core group.

But now that we’ve had three meetings with essentially the same people, I’m recognizing a few problems that need to be addressed in order to sharpen our group meetings.

The Biggest Problem: I think we are, for the most part, awfully polite people, which means that we’re hesitant to curtail conversation that takes us off track.  This excessive conversation has caused some disappointment for some members, especially when it occurs during the roundtable critiques.  Not only that, it takes us way past our allotted time for meetings.

The Goal: Keep conversation that isn’t specifically related to the work that is being critiqued to a minimum.  We have plenty of opportunities for this kind of chit-chat, but the focus of the meetings is the exchange of critiques and feedback.  That’s what we’re all here for…to find out how to make our specific piece better, and ultimately, to become better writers.

There are other issues, like lack of communication, different goals as writers, different expectations of the group, different levels of commitment and feedback effort, et cetera.

All of these things have inspired me to seek help from people who have run long-running, successful writers’ groups.  After all, we’re not reinventing the wheel, right?

A quick search on Yahoo! yielded The 6′ Ferret Writers’ Group, which has helpfully listed on their website their bylaws, as well as tips for starting a group.  (Thank you, 6′ Ferrets!)  Lots and lots of great stuff in there, stuff I will be dragging over to our group to discuss with our members.

I have high hopes for this group.  It’s been a long-time desire of mine to belong to a serious, supportive, long-lasting writers’ group, to connect with like-minded people that are as serious about the craft as I am.  My wish is that we will stick together as friends and colleagues in supporting each other as we all embark on successful writing careers.

And I think in order for this to happen, we’re going to have to reevaluate our approach on how we run the group.  I think we all hope and assume that we’re coming to the table with the same basic understanding about how this thing should go, and we don’t want to presume to manage each other.  But sometimes, you just gotta sit down and hammer these things out, ask each other what our expectations are, how we want to run things.

And although I have been accused in a previous life of being a stick in the mud when it comes to rules, rules work.  As Monica Geller (of “Friends” fame) famously said, “Rules control the fun!”

So call me Monica, but let’s lay down some rules and have a lot of fun while we jam our way together towards publication!

One thought on “A WORK IN PROGRESS”