All righty.  So first on today’s agenda was to select and install a new layout for the blog — or theme, as WordPress calls it.  So I moseyed on down to WordPress’s Theme Showcase to order up a new theme.

I already knew what I wanted, but being a girl, I had to try on a few different ones, just to make sure. 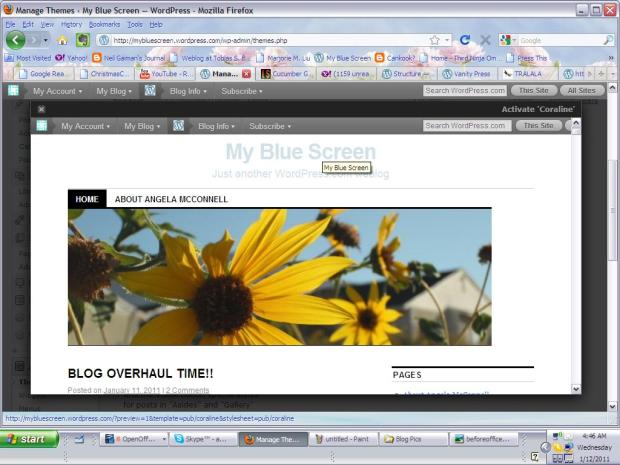 I actually like this theme a lot, but ultimately, I decided against it because it had the same narrow text width as my old theme Benevolence and I really want a more open look.

The next theme I tried is called DePo Masthead: 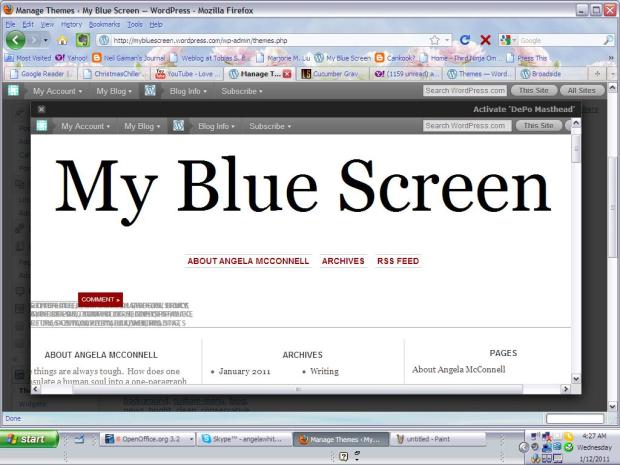 You can’t see the bottom half of the screen in these screen shots, unfortunately, but the appeal of this layout is that you could set it up to have three posts visible at once.  It’s intended to have a magazine feel to it, and I do like it.  It doesn’t feel as image-friendly, however, and I’d probably spend way too much time fiddling around with it.  At this point, I’m trying to keep things simple. 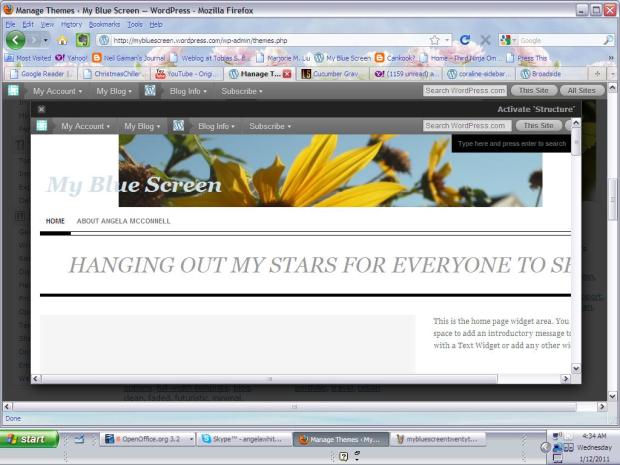 What makes this theme stand out is its awesomely huge Featured Post area, which is great for images.  The down side is if you have a small screen like I do, you have to scroll up to see actual blog posts.  I think this would be better for a prominent writer, someone who has professional-quality publicity images to display…ya know, like, “QUEEN OF THE NEW YORK TIMES BESTSELLING LIST,” something like that.  Hmm…maybe I can use this one later. 😉

Finally, we come to Twenty Ten, my original choice.  This is how it looked in preview mode: 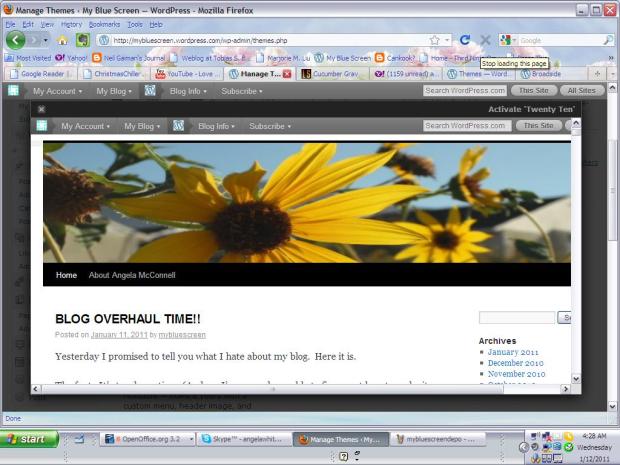 It’s the simplicity that settled it for me.  The font is bigger (the same size I use for all my documents), the text width of posts is wider, and it’s just looks clean.  It’s no surprise this is the most popular theme on WordPress.  It’s also the default theme they give you when you start a new blog.

The other thing I like is that you have the option to format your post in “gallery” style, where only a thumbnail and the first few lines of the post are shown.  As you’ve probably noticed, I’ve formatted this post gallery style.  I’ve seen this feature a lot recently in other blogs, and I really like it.  It lets the reader see the beginning snippet of several posts instead of just the current one.  I’m thinking this feature will also help me improve on writing my hooks for each post.  (“I was driving past the Big Chicken when the unthinkable happened…” — I know.  I’ll work on it.  But you should know, there is a Big Chicken.  He’s real.  And he’s very Big.)

Also, this theme lets you do a Sticky Post, which is really just a post that remains on the front page.  I’d like to use this area to welcome new readers and give them an idea of what they’ve gotten themselves into.  In the meantime, I may put up a “Pardon My Dust” sign.

So anyway, I went ahead and installed Twenty Ten.  So far, so good.  My last header didn’t automatically transfer, a picture of winter sunflowers, so I uploaded a picture of my little girl looking at the Nemo fish at the Long Beach Aquarium to see how the blue would look.  Aw, so cute!  But as much as I love this picture, it’s only temporary.  I want something that’s more relevant to my content…but that’s for later on in the week.

Once I had the new theme in place, the next thing I needed to do was add some widgets, all the stuff you see along the right-hand side.  I’m not set on any of that, I don’t think.  I’ll be playing around with those all week, trying to decide which ones I want to keep and in what order and so on.  Some of them I selected only because I wanted to see how they actually looked.  So expect all of that to change in the coming week.

By the way, in all of my muddling around, I did figure out how to change font size — I think — but it involves downloading Typekit.  They offer a 30-day free account, but after that, their packages start at $24.99 a year.  Not something I need at this point, but good to know.

I also want to get rid of the, “Just another WordPress.com weblog,” in the header and put something else there, but this requires an update of my free account and costs $14.97 a year.  Maybe later if I decide to get all fancy I’ll give it a whirl, but I’m not motivated to do it just to change that one line.

That’s it for today.  Whew!  That’s enough for today.  I hope you guys like the new look.  Tomorrow I tackle the “About Me” page.  Oh, joy.