So the kid and I recently went to our first ever Movies in the Park in Redlands, California, to watch The Lego Movie.

How was it, you ask?

Firstly, it was in Downtown Redlands, which, if you are not familiar, is the coolest town in the I.E. It’s filled with unique shops and tree-lined walkways and fantastic eateries. There’s a gorgeous old library next to the Lincoln Memorial, an outdoor amphitheater where Shakespeare is performed in season, and a historical neighborhood with more Victorian mansions than you can shake a cat at. Let’s put it this way…everyone in the Inland Empire wants to live in Redlands. And if they don’t, then they’re lying…because Redlands is AWESOME.¹

Secondly, against all astronomical odds — especially during a popular event like this —  I found parking within smelling distance of a healthy fart. That’s how close we were. AWESOME!

Our friends had already staked out a primo spot, so it was just a matter of transferring our chairs from our primo parking spot to our primo reserved spaces. AWESOME!!

But wait! It gets even more awesome! Our base camp was situated right in front of Augie’s, the most awesomest coffeehouse in the I.E.! 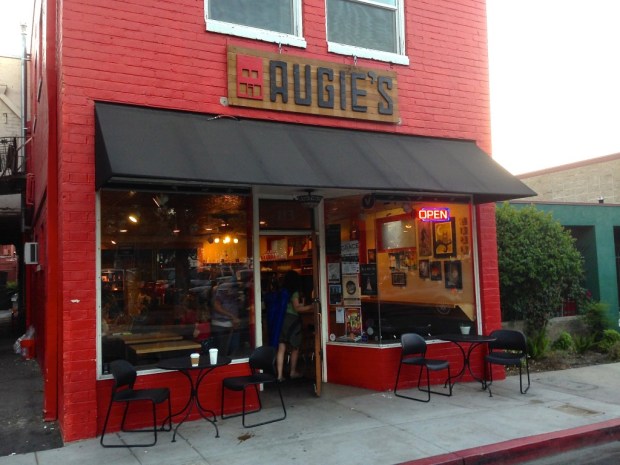 There wasn’t even a question that coffee would be had. I mean…c’mon! This is real life after all.

(Besides, I had never been to Augie’s, and there’s no way I’m going to turn down coffee from a bright red building. Just not gonna happen.) (I’m totally predictable that way.)

As expected, the interior was as bold and quirky as the outside. I was pleased. Me likes art! 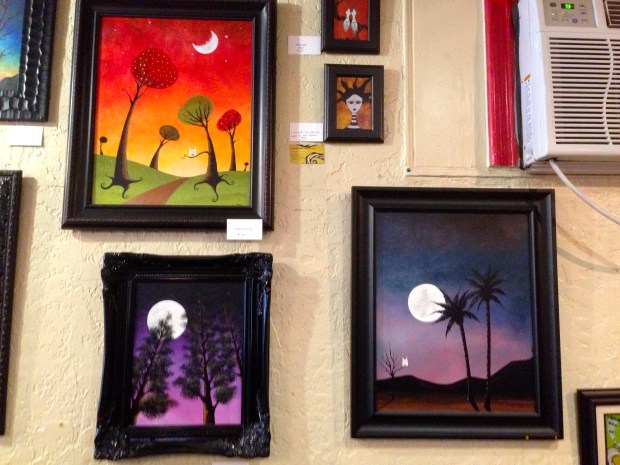 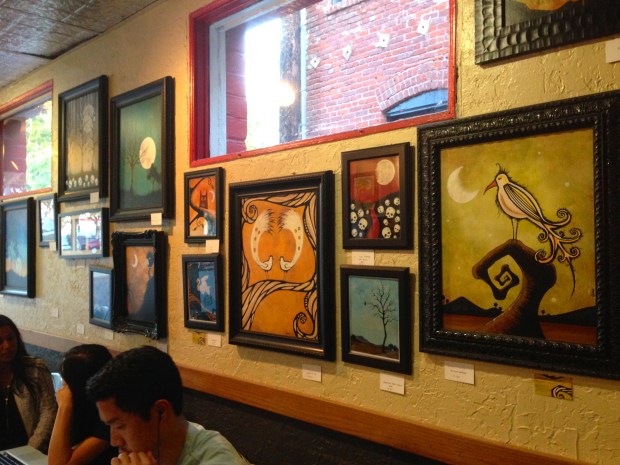 I hadn’t even tried the coffee yet — which my friend assured me was delish — and I already loved the place. Not only was it beautiful and artistic and hitting all kinds of high design notes, but their customer service is killer. And I speak from both sides of the counter — good and bad — when I say customer service can make or break a person’s day.

And I’m a bad, bad girl for not getting our coffee consultant’s name, but until I see him again, we’ll just go with Mr. Wonderful. 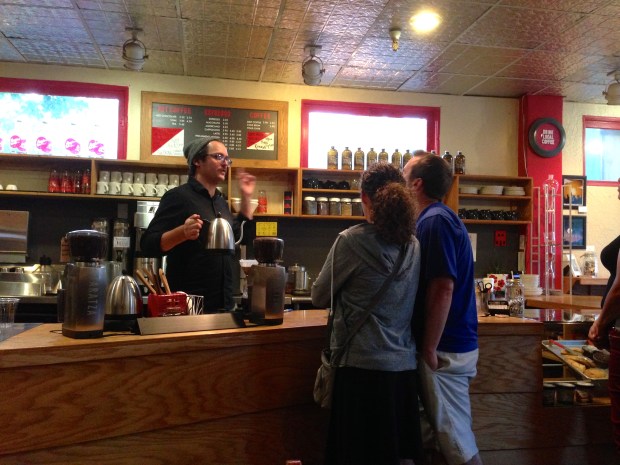 Mr. Wonderful was patient and warm and knew what the heck he was doing. He was not just a pretty face fronting the counter. He definitely knew his Ethiopian Amaro Gayo from his Costa Rica Serro Paldo. (Did I mention that Augie’s roasts their own coffee? Well, they do. I know…that’s pretty awesome.)

Now, he could have made me feel diminished to the status of the ignorant “coffee” drinker who only knows they want it brown and warm, but instead he was friendly and answered all of our questions and made…dare I say?…awesome suggestions.

My friend Kathy was already a fan and frequenter of Augie’s, so she knew what she wanted: a pour-over! 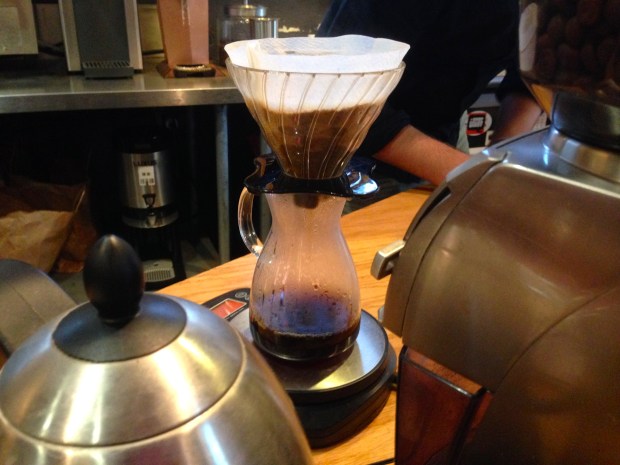 Now I’ll admit that in my head, a pour-over involved a spoon and some sugar — but then I remembered that’s a whole different adventure on my list of things to do — and likely on a different continent — so I was mildly disappointed at the simplicity of the thing…until I had a taste. No sugar, no cream, just straight-up skin-searing hot (I spilled a little on me) coffee. That’s right. Black, like nature intended it.

And it was good. I’ve never had coffee with no bitterness. It was perplexing…and pleasant…and awesome! 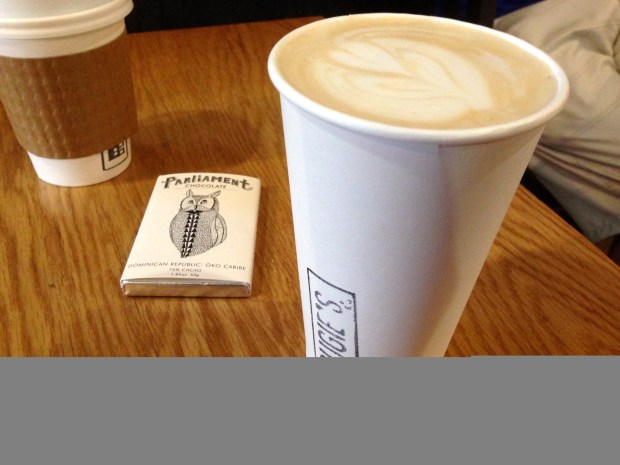 I ended up ordering a Lavender Latte…strictly based on the title. Mr. Wonderful assured me it was really good, and he was right. Oh, man! (I went back a couple of days later for another one…no lie.) It was light and floral and just the right amount of sweetness…and the really incredible thing to me was it tasted exactly the same all the way down to the bottom. No sugar sludge to cringe through. Awesome.

If that wasn’t enough awesomeness, my friend gingerly selected a teeny tiny chocolate bar from the counter the way one might select jewelry. She confided it cost $6.

“You’ll understand why,” she said, promising to share as long as I promised not to let the kids see. 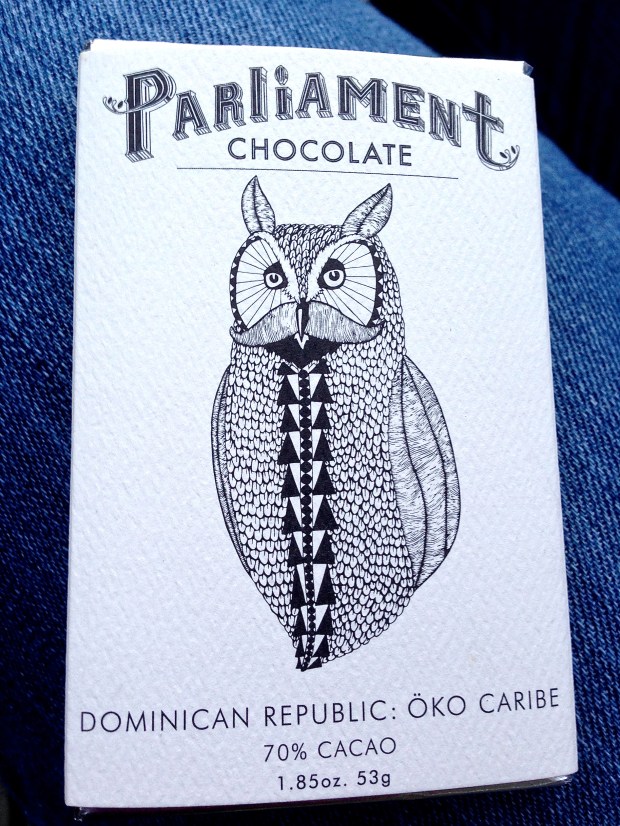 As it turns out, Parliament Chocolate is a local business that made this chocolate a stone’s throw from Augie’s. They’re a true “beans-to-bar” chocolate maker, and their dedication is apparent in their approach to their art. They buy their beans direct from the farmer, and everything is made in small batches, with love and dedication. 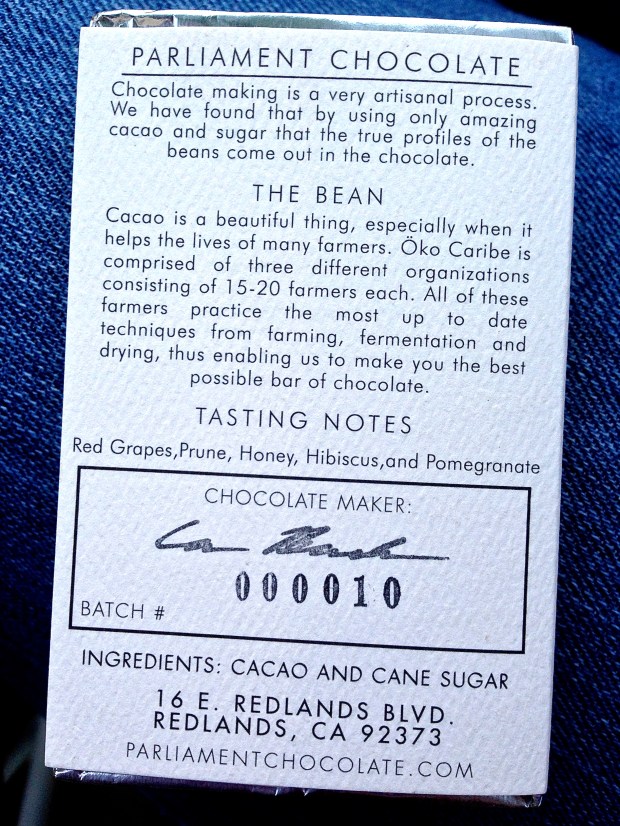 Once we were settled back in our lawn chairs — and we made sure the kids were not looking — Kathy carefully broke off $1 chunks for me and her mom to taste. Incredible! There just weren’t any words to adequately describe the taste. And if you insisted on trying, the ones you needed were right there in the tasting notes: red grapes, prune, honey, hibiscus, and pomegranate. Ambrosia!

Kathy asked me if I wanted more. Yes, I wanted more! But I was polite and declined…because I had plans to return to the scene of the crime later. I could wait. Maybe. (I also noted the pocket in her backpack where she stored the rest of it…just in case there was an emergency or something. Ahem.)

Oh, yeah. And then there was the movie…which was pretty awesome!² 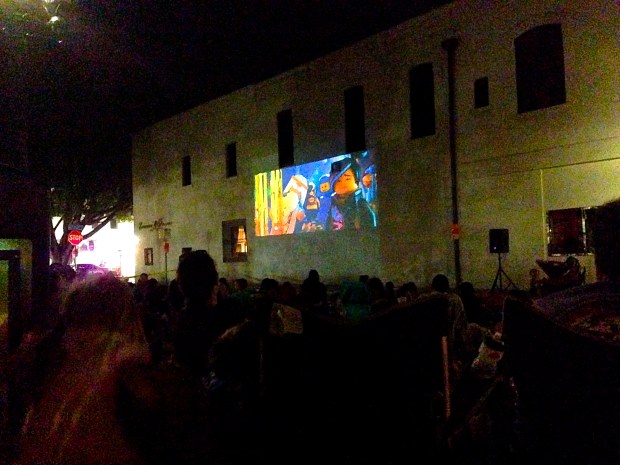 ¹ I am not a resident of Redlands, nor do I play one on TV.

² I am aware that I have used up my word usage quota for “awesome” for at least the next year, and so will refrain from using it from this moment forward…until at least something else awesome crosses my path. 🙂 If you are weary of the word “awesome,” then I recommend you refrain from watching The Lego Movie until that prejudice passes…because the earworm you’ll get will — well, let’s just say you’ve been warned. And whatever you do, do not — I repeat — DO NOT look up the 10-hour version of “Everything is Awesome” song on YouTube. Don’t do it!

³ If you find this post awesome, please help me spread the word by sharing with friends. Remember, everything is awesome! Everything is cool when you’re part of a team!

6 thoughts on “EVERYTHING IS AWESOME!!!!”