I was 15 years old the first time I went to hear Ray Bradbury speak. I rode with a friend and her mom out to a cramped little library in the middle of the desert, to a tiny town called Lucerne Valley. It was so old-school you could still see where they used to park the covered wagons.

And it was packed.

We had to park way out among the Joshua trees and walk like concertgoers through rows of cars up to the brightly-lit library. We wormed our way through excited book nerds and squeezed in, ducking beneath a latticework of elbows until we reached an open spot on the floor near the front, where we sat cross-legged like good little children.

I couldn’t believe it. There he was! In the flesh! Mr. Ray Bradbury, Celebrated Storyteller and National Treasure—the guy who wrote Fahrenheit 451!—with his gleaming white hair, thick black glasses, and the biggest smile I’ve ever seen on a human.

He was seated in a chair, his arms held open to gather us in, and we leaned forward hungrily like sunflowers lean toward the dawn. And like the dawn, he inspired, pink and breathless, and he told us about the things he loved best.

Mr. Bradbury loved carnivals and Buck Rogers, dinosaurs and films, monsters and mysteries. He painted his life for us in big splashes of white on blue, electric on mystical, and we all fell in love with him.

It was a grand tour through his joyful childhood, a neighborhood of miracles and lightning men, and through the looking glass to his adulthood and legendary career, a serendipitous landscape shaped by the pursuit and celebration of those things he loved so much.

After storytelling time, I waited in the autograph line with my copy of The Toynbee Convector. Mr. Bradbury inscribed it to Ages!, a name I was trying out at the time because I was 15 and nerdy and writing epic fantasy. I was beyond stoked. 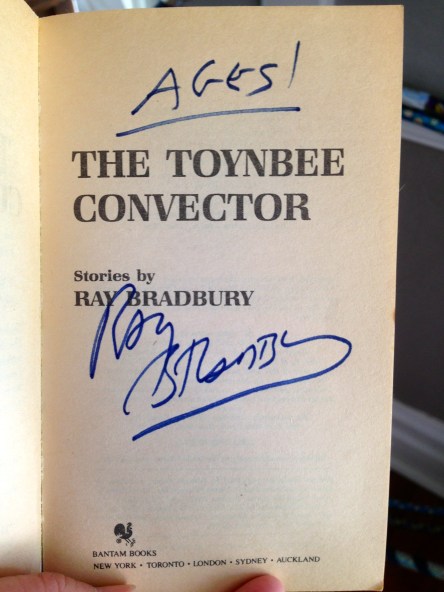 If there could be only one word used to describe Ray Bradbury, it would have to be joy. It burned bright and constant, and was unavoidably catching.

I left that little tic tac of a building burning with the afterglow of a religious experience. As we moved into the line of headlights that traced the way back across the dark-blue desert towards home, my young writer’s heart burst with possibility and ached for the future.

The second time I got to see Ray Bradbury speak was maybe a year later. He was a keynote speaker at a writer’s convention at the local university. I hitched a ride with Mr. Brown, my English teacher, who was way cool. He drove with one foot on the dash like a teenager and treated me like a fellow writer. I felt very grown-up.

This time, instead of a brightly lit library full of excited chattering people, Mr. Bradbury spoke in a hushed and darkened theater, his white hair set aglow by stage lights, and we got to see him for what he really was.

Just like before, he returned us to his childhood, straight to the traveling carnival where his 12-year-old self met Mr. Electrico, who sizzled on his electric chair, and knighted and delighted a young Ray Bradbury with a sword full of lightning and commanded him: “Live forever!”

Down in the trenches of the theater, his words ran up and down everyone’s chair legs, connecting us all like a lit fuse, and I realized suddenly it was Ray Bradbury who was Mr. Electrico, knighting and igniting us, telling us to go, live forever!

I left the theater, electricity still humming through my veins, my brain and heart on fire. What a magician! To be able to incite such emotion through words! Provoke tears of hope, declarations of love, and to make people want to jump to their feet and hurry—hurry—rush out into the world and fall head over heels in love.

I knew that’s what I wanted to do! Not just write stories that entertained, but stories that connected, heart to heart, soul to soul. I wanted to turn on some lights and shout from the rooftops and make people cheer! And then do it all over again!

They were selling tape-recordings afterwards. I swallowed my embarrassment and borrowed five dollars from my teacher to purchase a copy. It was worth it.

At the very beginning of the recording, you can hear the space of the auditorium, the sounds of breaths being held and released, feet shuffling, laughter and murmurs. I am somewhere on that tape, my 16-year-old self, an indiscernible part of that vague mix of noise and audience, about to be set on fire and launched into the future.

And I still have that five-dollar tape, a little piece of Ray Bradbury’s ghost now, his voice hailing alive and joyful from the Great Beyond.

It shows up now and again, when spirits get low and closets get cleaned out, a relic from a past life, a reminder of what is possible. It’s a spiritual fortifier for me, extra mana, a can of Popeye’s spinach.

Each time I listen to the tape, I discover a deeper truth that I wasn’t long-lived enough to understand before, and I wonder what mysteries my future self will uncover the next time I revisit it.

In this way, Mr. Bradbury has become an old friend, a mentor, a hero, charging me up and setting me off. And every time he commands me from across the void, all the way from 1990, “Live forever!”, I am sent careening back to my keyboard, 16 years old again, the future electric and brilliant with the impossible once more.

This essay is included in my short fiction title Between Friends, available at Amazon. Coming to B&N, Kobo, and other fine e-tailers soon. 🙂 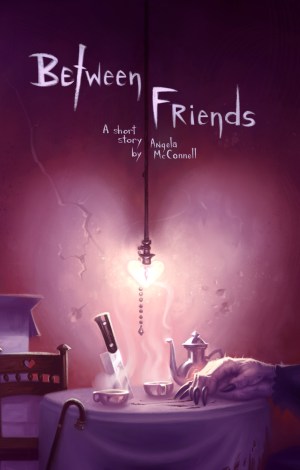