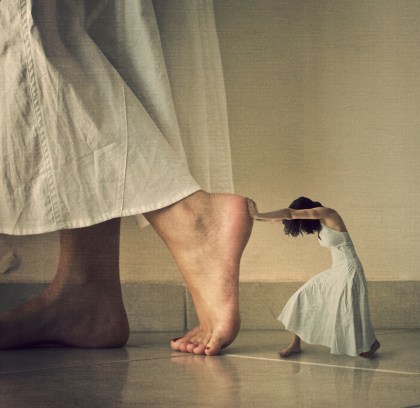 "A Little Push" by stephaniedan - deviantART.com

But you know what it is?  Somewhere along the way, I got comfortable and slipped the blinders from my head (they were chafing my ears), and have since stood frozen and awestruck at the looming horizon of projects I have committed to.  It’s big.  It’s towering.  And I can’t help but wonder if the darn thing is going to tip over and bury me, leaving only my glittery red Carlos Santanas sticking out from the rubble.  (At least my feet will look cute.)

I think it’s part of a necessary skill set among successful people that they are able to focus on one thing at a time, one task at a time, without too much daily energy devoted to how it all plays into the Big Picture.  This is something I am working very hard at developing, as I think it’s the gold standard mark of a true professional.

And it’s not always fear or dread or a feeling of being overwhelmed that slows me down.  More often than not, it’s excitement, anticipation, and daydreaming that trips me up.

Anyway, this is what I’ve been struggling with.  I’m not proud of it, but at least I can say I’m in front of the computer every day.  Because writing is such a solitary endeavor, it’s difficult to find real help.  You can talk about it with your writing friends, you can read inspiring works by other authors, you can blog about it, you can do all sorts of things that will make you feel better — and there’s nothing wrong with that — but none of these things actually makes writing happen.  Only you can do that.

So I just have to talk it easy, put on the blinders, and commit to doing each task to the best of my ability.  It’s the only thing I can think of to do.

That said, I’m getting back on the plane where my characters are enduring a long flight to Australia.  I hear the chicken lasagna in first class ain’t half bad, so I don’t wanna miss it.

0 thoughts on “HELP YOURSELF”