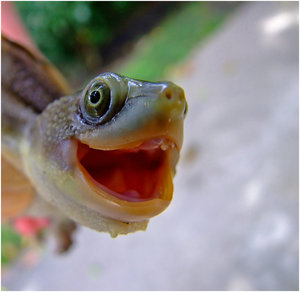 "Happy Turtle" by Human_Opium at deviantART.com

I love Mondays, the first day of the month, and I really, really love New Year’s Day.  Why?  Because they all represent fresh starts.  Those are the days that I start new diets, new exercise regimens, and new resolutions to write more, dance more, knock out my to-do lists more, finally clean my house — <loud coughing>

Historically, my approach has been similar to most other folks’:  Explode in a bright blue flame, and peter out to a colorless, odorless gas.  Ppppbt.  I’m very much a student of the School of Ten Overambitious Steps Forward, Eleven Shameful Steps Back.  I do get things accomplished, but man, it’s always a long and arduous scramble up a mountain of scree with greased shoes on.

Having a baby has curbed my bright-blue-flame approach.  There’s no luxury of spending hours calculating my exit trajectory into the stratosphere, then spending entire days attempting to launch myself into said stratosphere.  Instead, it’s Ang the Turtle, a slow-and-steady approach based largely on a certain someone’s naps.

For someone who always wishes it were done yesterday, this has wreaked havoc on my warped sense of progress.  However, I must admit, this one-thing-at-a-time approach towards some of my goals has begun to yield small, bright fruit with seemingly little effort on my part.

Take walking, for instance.  I have always, in some form or another, been trying to get into shape.  Walking has always been my choice of exercise, and I have had varying degrees of success trying to cultivate a walking habit.

Well, one day in July, the baby got up pretty darn early, and there was no coaxing her back to sleep.  Exasperated, I packed her in the stroller and took her for an impromptu walk.  We had such a good time, that that impromptu walk turned into a daily event without my even realizing it.  Before I knew it, we had walked four mornings in a row.

They say you can form a habit anywhere from two weeks to 40 days of consecutive, consistent effort.  I decided, hell, let’s go for 40 days.  Just focus on doing it for 40 days.  40 days came and went.  For once in my life, I wasn’t keeping track of my progress, writing everything down, counting calories, beating myself up over missed days.  I just focused on getting up in the morning — which, incidentally, isn’t very difficult with a nine-month-old — who’d a’thunk? — getting us dressed, putting on my sneaks, and getting us out to welcome the day.

I think we’ve done, hell, (counting toes here), 68 consecutive days of morning walks, and I would estimate at least 40 evening walks, putting us conservatively at around 220 miles now.  Maybe more.  I haven’t kept track.  I just know the day we first hit the pavement.  It’s just become our habit.  If we’re home during the evening, we walk.  We always walk in the morning.  It’s just something we do.

And it’s the most consistent I’ve ever been with walking ever.

And the wonderful thing is that I do it without thinking.  Even when I’ve stayed up late writing and am running on too few hours’ sleep, I am on automatic.  Pack baby up, put shoes on, grab cell phone, et cetera.  Even when the baby’s not in the mood, I still take her out.  No matter which of us might be in a bad mood, once we turn our street corner and face the morning, we’re gold.  But mostly, we both look forward to it.  It’s part of our routine now.

I relish this time.  I’ve gotten countless story ideas, metaphors, and the like during our walks.  We see all kinds of animals that you would never expect to see in an urban area.  Once, when we were out particularly early, we had a chance encounter with a coyote who floated across our path not more than 20 feet away.  What a gift!  Something we would have missed entirely if I had insisted on making the baby go back to sleep until Momma was ready to get up.

Focusing on developing one good habit has been such a success for me that I decided that I could use this slow and deliberate approach to everything, from getting into great shape, to becoming the prolific and successful writer I so long to be.  The secret is picking one specific habit I want to cultivate and just working on it until it becomes…wait for it…that’s right…habit.

I’ve used this technique to convert myself from a mostly juice drinker to a mostly water drinker.  My next goal is to eventually develop a habit of eating five servings of fruits and veggies a day.  Notice there’s no bans on ice cream, pizza, and those delectable little White Castle cheeseburgers.  I’m just focusing on developing good habits one by one, knowing that they’ll eventually push the old ones out of the picture.  Hell, I’ve already kicked the Top Ramen habit.  (Though I still have to be careful when I go down that aisle at the grocery store.  I suspect I’ll always be a recovering addict when it comes to deep-fried noodles in a package.)

Now I’m trying to incorporate this slow-and-steady habit development approach to my writing.  It’s still difficult for me not to make ambitious lists of projects that I think I can get done in nanoseconds of time.  Just ask my friend and fellow writer/ass-kicker extraordinaire.

However, I do feel like I’m making progress.  Take this blog, for instance.  I made a commitment to post every day for seven days straight.  (I realize technically October 2nd has come and gone, but this is where I just have to forgive myself.  The baby is boss, and I have to write around her.  I didn’t arrive at the keyboard until 11:50 p.m. tonight…but I arrived.)

I’m here.  I’m typing.  I’m almost done.  And that will make two blog posts in a row for me after a summer of blog drought and famine.  38 more posts, and I’m gold.

0 thoughts on “ON DEVELOPING GOOD HABITS”