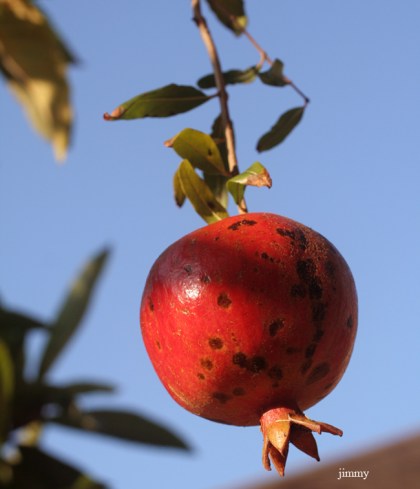 "A Pomegranate" by jcphotos - courtesy of deviantART

I woke up this morning with the song “Love Remains the Same,” by Gavin Rossdale in my head.  The melody followed me into the bathroom, back to the bedroom, and into the rest of my day where I discovered that, yes, Fall is finally here.

I don’t know how it happens so quickly.  One minute, I’m caught up in the slow-motion molasses of an endless Southern Californian summer, sweat-sticky and nuclear white-bright; the next minute, I’m just starting to notice the edges of dusk are getting that peculiar shade of dusty lavender and stealing minutes from the day.  And then it happens.  All the trees have cast their summer-worn cloaks to the ground — I’ve got sticky pecan leaves plastered to the bottoms of my flip-flops — and there’s a definite bite in the air.  It even smells different.

It was chilly this morning, so I bundled up the Pup in sweatpants, a long-sleeved shirt, and socks.  She is most definitely a summer baby and finds long-sleeved shirts perplexing and socks an annoyance.  After I put on her long-sleeved shirt, she held out her arms while pinching the edges of the cuffs and just looked up at me as if to ask, “What on Earth?”  (That’s Baby for WTF?!)

This has definitely been the Endless Summer for me.  I was told recently by a lady at my dance school who just weaned her second baby, the most adorable little girl, that there’s nothing like your first baby.  I believe her.  I’ve spent the entire summer just trying to soak up every ounce of baby-ness that I can.  Already, she is starting to lose her baby fat, and I am seeing the beginnings of the toddler to come.  I’m so proud of her.  She’s come so far from her humble 3 lb.-8.4-oz. beginnings.  And yet, there is a little bit of sadness knowing that these days pass forever.  I’m trying to memorize every detail, every chubby dimple, every silly little laugh.  There’s surely magic like no other in this first baby, a true love affair.

Although I haven’t posted for an eternity, I have been writing.  In some ways, I’ve made significant progress; in other ways, I have found myself run against both new and familiar challenges.  My hat’s off to mothers of several children.  How they get anything done is beyond me.  I read recently about a woman — bestselling author, thank you very much — who wrote her novel series while raising her five — yes, that’s right, one, two, three, four, five — children.  Wow.  On my knees genuflecting.

But the work does progress, trickling towards completion in the wee hours of night and during naps.  It’s funny, but in a way, I feel like I sometimes get more done because my free time is short.  I’ve got a couple of short stories done.  Still working on the rewrite of the novella, but have finally figured out solutions to some very major problems with it.  Also discovered the solution to the rewrite of another long story while on my morning walk.  Turns out it was sitting on top of a local church all this time.

I’ve also enrolled in a creative writing class.  Yep, I’m back at school.  And I don’t even have the decency to be ashamed of my aged self.  (Okay, I swear, this is the last time I mention age in a negative way…well, until my birthday.)

So I’m sitting in class next to people who graduated high school last year, who actually had the same teacher I had back in…well, when I graduated.  Kind of cool…until she said, “Wow!  I didn’t know he’s been there that long.”  Yep.  He’s been there since I was in school, back when campus was overrun with those pesky little dinosaurs, the ones the size of chickens who had a vicious peck.  Thank God, they finally rounded those guys up.  But then the seagulls came and…well, that’s a story for another time.  How seagulls end up wintering in a high school baseball field in the middle of the desert is a mystery to me though.

In all seriousness, this class has just been a boon for me.  My biggest problem has been keeping up with all the ideas.  It’s unleashed a frantic flurry of ideas.  They’re like a viral cloud, following me everywhere, even peeking in my bedroom window.  I’m terrified to be anywhere without pen and paper.

I signed up originally to finish my continuing education credits for my professional certifications (“I can take creative writing?  Cool beans!”), but it’s become a real joy for me.

At first, I was a little grumpy when I saw the syllabus.  “We’ve got to do *&@!ing poetry?!  Can you just hold my pencil and push it firmly into my eye, please?  Yeah, like that.”  But the instructor became kin when she looked at me and said in comrade-like fashion, “You know, we who are queer for language.”  Yes!  That’s me.  I’ve found my tribe, a mismatched band of second cousins and inbred neighbors, but my tribe nonetheless.

And can I make a confession?  (Looks around, then leans forward conspiratorially.)

I thinking I’m starting to fall a little bit in love with poetry.

On top of that, my lovely, lovely high school friend and writing cohort came over today, and we exchanged written lists of writing commitments.  Then we lit candles and drew symbols in chalk on the floor, sacrificed a newt, and made a solemn pact to kick each other’s ass all over the place if we didn’t get our shit done.  Actually, we ate pizza and had a very nice visit…but the ceremony and ass-kicking was definitely implied.  You just had to read between the lines. <g>

So we’ve made a partnership of solemn encouragement, outlined by very specific goals.  Here’s to our success!

In other news, yesterday Fat Cat was sworn into the U.S. Army.  That’s right.  I am officially an Army wife.  It’s such a huge concept to wrap my mind around still, but there’s time.  He doesn’t leave for Basic until March.  It wasn’t an easy decision, but it feels right for us.  And I just want to say, I am proud of my Fat Cat.

Yep.  If you inhale deeply, you can smell the change in the air.  Even the daylight looks different.  After a blissful summer of morning walks and baby milestones, of countless barbecues and countless mosquito bites, Fall is here.  Lots of changes ahead of us.  There’s a chill in the air, but I welcome it.  I’ve got my sweater.