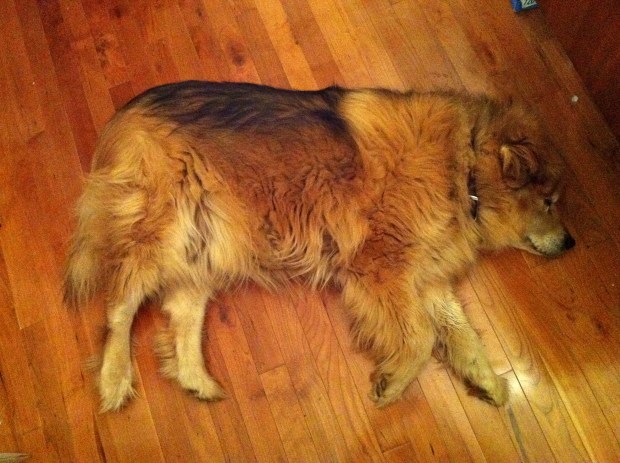 Solo, Captain of the Guard

Okay.  So I wrote a very lengthy blog post about the “incident” that took the air out of my tires for a good week…and then I sat on it.  Although I think it makes for an interesting and dramatic read, I’ve decided that I don’t want it on my blog…mostly because I don’t think it deserves any more attention and energy than I’ve already given it, and frankly, I’m tired of talking about it.  But I do feel that I owe you guys some sort of explanation for my absence, especially given the fact that I’ve committed to blogging daily here at My Blue Screen.

So here’s what happened in a nutshell:  Friday night before last, I had a peeping Tom.  I used to think that was a funny term, but as it turns out, not so funny.  It was a frightening and unnerving experience, as you may imagine, but now that I’ve gone through all the normal reactions of fear, paranoia, anger, and murderous rage, I think I’m all better. 🙂  At this point, everything that needs to be done has been done.

This incident has clearly demonstrated to me, however, just how important it is to have a good circle of friends and loved ones to lean on, and I am so grateful because I have the best.  My Mom, Dad, and brother Jon are great.  That goes without saying.  My wonderful friend Marian, who was actually with me when it happened, spent two or three sleepless nights (and one very sleepful afternoon 😉 ) at my house to keep me company.  (Thank you, Marian!)  One of my neighbors is on high alert, stalking around my property with a bad attitude and an excuse to bring out his shotgun each morning at 4:30 a.m. before he leaves for work.  Yay, Larry!  All of my other close friends — Jeff, Jim, Danny, Sean, Kellie, Kenia, and Mary — have been there for me whenever I need them.  Thanks, you guys!  Just knowing you guys are there not only makes it easier for me, but for Fat Cat, who is stuck far away and unable to really do much more than worry.

Finally, I must report that the Dogs (capitalization intended and extended forever into the future out of respect for their Greatness), Solo and Dixie, are reassured in their household positions as Guardians of the House Goddess and her Adoring Servant (that would be the Toddler and me) and have enjoyed their new indoor assignments muchly.

But even with all this goodness in my life, I must confess, I’m still pretty pissed off.  The thing that has me pissed off the most is how much time this guy stole from me.  I want it back.  I want it all back.  So I’m taking it back.  I’m rewriting this whole past week like it never happened.  I’m going to write all the blog posts I should have written.  So be on the lookout for links in each daily post for posts written to fill in the days I missed.  Because that’s how I roll…and because, as Marian says, Homey don’t play that.  Just kidding.  (It was hilarious when she said it, but it only makes me feel foolish as I type it, which is why I should leave it in.)

So anyway, that’s what’s been happening around here.  Writing’s going well.  Lots of exciting stuff coming your way.  But right now, I’ve gotta prepare my submission for Ye Olde Third Ninja Omniscient Writers’ Club (and Casino), so in the words of one wise Ninja Colleague, I must away.

Hope everyone’s well and kicking word count ass!  Remember, this month’s dinosaur party is dependent on our word count, which is currently at 17,858 words out of 100,000 (thanks to a recent donation of 2,337 words by the awesome Sparks in Shadow).  I know I have a pretty decent word count accumulated, so I will count that up and update the word widget tomorrow night so we have a clearer understanding how close we are to 100,000 words!  I wanna play with dry ice, dammit!

Remember, all words, any words — whether they’re an email to your mee-maw or a dirty limerick inspired by your boss, rants and ravings from your journal, or artfully-written grocery lists — I want ’em.  I’ll take whatever you’ve got.

Now I’m off to make more.

6 thoughts on “SOMETIMES HISTORICAL REVISION IS A GOOD THING”