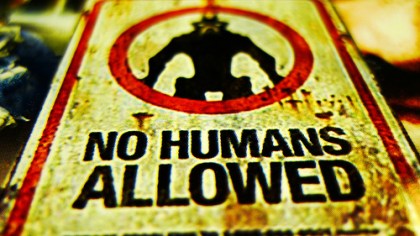 …I finally saw “District 9,” and I was floored.  I was absolutely floored.  This may be one of the best science fiction films I have ever seen.  It certainly is the best movie I’ve seen in a long while.  And I think it had every bit to do with the character development of the protagonist.

The story is set in Johannesburg, South Africa, where an alien spaceship has descended from the heavens to hover silently over the city.  After three months of no activity, humans cut their way in and make first contact.  They find the ship apparently disabled and full of sick and malnourished aliens.  The aliens are installed in a slum called District 9.  Human Afrikaners and prawns — a derogatory slang for the aliens — do not coexist peacefully, and so a decision is made to relocate the aliens to an internment camp outside Johannesburg.

The protagonist is a bureaucrat named Wikus van de Merwe, who is promoted to be the head of the relocation operation and who embraces this new position with a zealous enthusiasm.  His enthusiasm perishes when he becomes exposed to a substance that begins to change his DNA to alien DNA.  Suddenly the bureaucracy he works for is hunting him.

I won’t go through the whole plot as you can find great plot synopses all over the Net.  I just wanted to mention enough to explain why I thought the story was so great.

In the beginning, we see van de Merwe flame-torching a shack filled with incubating alien eggs.  He’s laughing and calling it “abortion,” noting to the camera in excited glee the popping sounds of eggs exploding.  30 minutes later, he’s waiting in line with other aliens in District 9 — the only place he can hide — buying cat food.  And that’s only the beginning.

He goes from his seemingly superior position as a human in charge to descend through the various levels of suffering the aliens endure…all the way down to becoming a biomedical experiment.  It is this hellish descent that makes you just cringe for this guy.  And root for him.

There’s just so many moments in the film where I found myself really feeling for him.  There were times I wished for his sake that he would just be killed.  And when he’s looking in the mirror at his back, where the skin is coming off and his back ribs are showing — oh, God.  I just wanted to cry for him.

Man, that’s audience/reader empathy.  And if I can ever replicate that kind of feeling in a reader, I will do an Irish jig, I swear to God.

Hats off to the collaborative efforts of everyone involved in this film.  The fact that it was written in two months just furthers my respect for the whole project…and makes me want to be a better writer.

I love a film that makes me want to go straight to the computer and get to work.