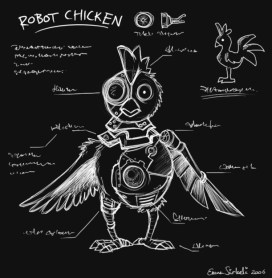 I’ve been keeping a file entitled “Crazy People,” with the intention that I’d start sharing some of these stories.  This file is getting pretty big, so I figure there’s no time like the present.  Besides, I’ve been dying to use this picture.

I have an aunt — married into the family, I hasten to add — who is convinced that there’s a covert operation somewhere in China that is manufacturing fake eggs and passing them off as real.  Why she thinks there would be some benefit to a company to expend massive resources to re-engineer and artifically reproduce chicken eggs when there’s these birds called chickens that reproduce quickly and crap eggs out by the…well, dozen is beyond me.

We were at a dinner with my cousin and her new in-laws when my aunt — her mother — leaned forward to warn us in very conspiratorial tones about this dangerous new product on the market.  “Make sure to check the carton,” she said, “to make sure you’re getting natural eggs.”

Okay.  At this point, her daughter let her attention be drawn in the other direction — almost gave herself whiplash, poor thing — while I decided I needed to check my plate for fleas.

Why?  Because we all know you can’t argue with a crazy person.  But even the best of us all fall peril to the siren of possibility.

So I got to sit there and watch my mother draw herself — hell, she dove in headfirst! — into an argument with my aunt about why there are no such things as artificial eggs and how she’s probably smoking too many Chinese herbs.  My aunt’s butt-headed refusal to surrender to reality and logic completely dumbfounded my mother, whose level of incredulity was becoming a bit tangible and uncomfortable for the rest of us.

They both looked to the rest of us for support.  My mom’s face was a picture-perfect example of “WTF?!”  My aunt’s expression was one of, “Poor thing.  You’ll soon be saying, ‘I told you so.'”

That’s when good sense returned to my mom, who stabbed her chopsticks into a plate of noodles in front of my other (sane) aunt and remarked on how lovely the food was.

Postscript:  Just to make sure it’s my aunt who’s the crazy one and not us, I Googled “faked eggs,” and apparently it’s an old story that’s been floating around the Net for the last few years, a recent urban legend.  Whew!