Dudes, I’m tired…oh, so tired.  But it was totally worth it.  The Household Dinosaurs really know how to get down!  Once I forwarded our awesome, stupendous word count to the head shaman dinosaur (Tink Triceratops) — via smoke signal, of course, which is kind of hard to do with birthday candles — I was given a VIP all-access press pass to…well, my own house actually.  They just let me out of the bedroom to watch and take pictures.

It all started very early, with the Sacred Cleansing Ritual of Woolite. 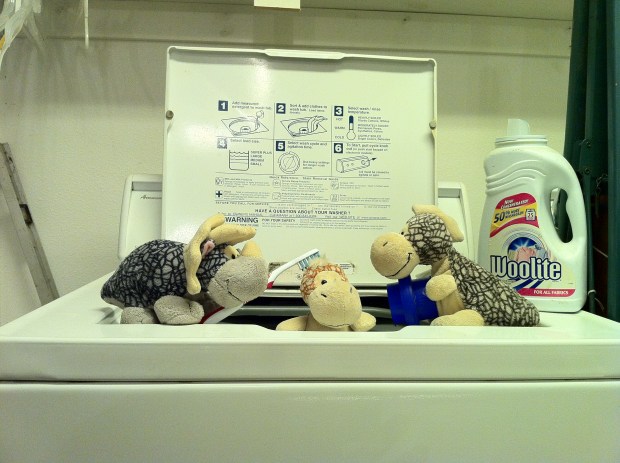 A couple of hours later, after receiving dry-heat tumble massages, their fur bits all fluffed and fabulous, they each carried a lit wax taper symbolizing the lights of the Muses and began to walk the Ancient Path of Par-tay. 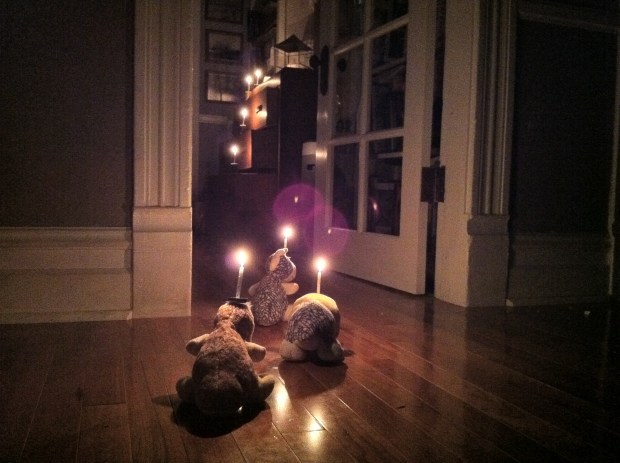 Our dino party participants making their way along the "Ancient Path of Par-tay," the same path the Ancient Greeks traveled to get down with the Muses. 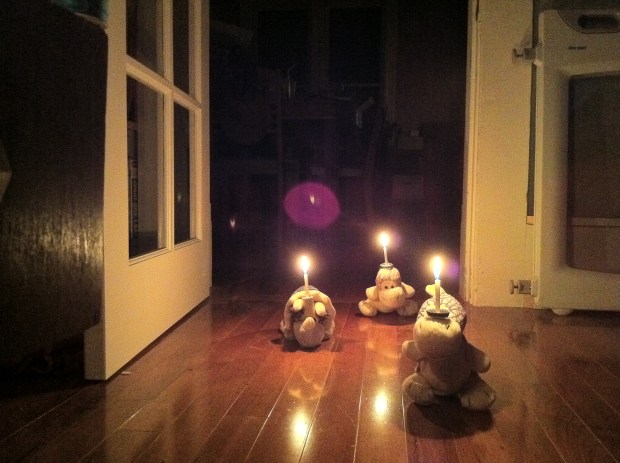 A half an hour later -- I know! -- they finally make their way to The Office, the Official Party Venue of Household Dinosaurs, Troop 4. (Yes, I'm a den mother, but don't be jealous...it's very stinky in the den.) 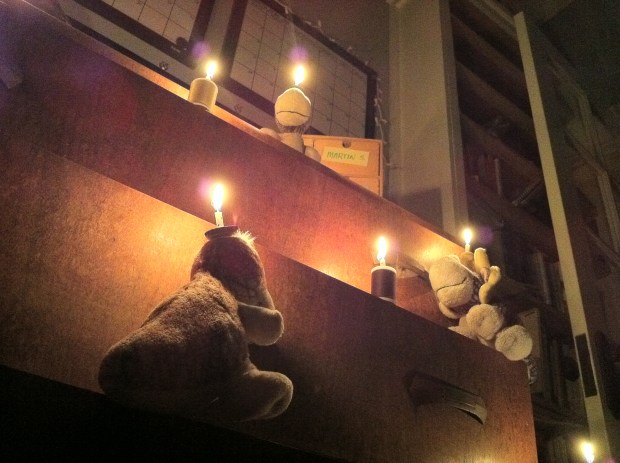 The Ascent. I gotta admit, I was impressed. I don't think I could jump up on a six-foot fence balancing a burning 2x4 on my head. At least not yet. 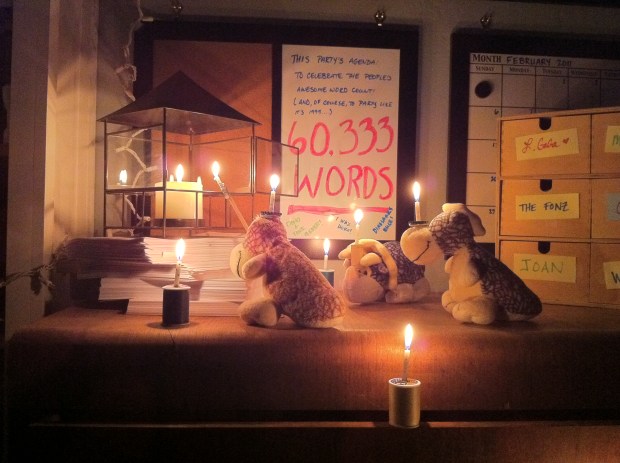 Opening Ceremony: The Par-tay Candle is lit in honor of the Writers (that's us!) and in honor of the Muses. You can't really see them unless you look at the picture with each eye on opposite diagonal corners, but they're there, Trust me. 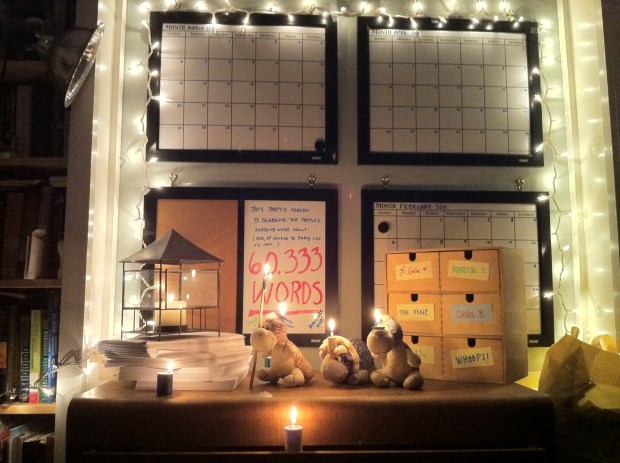 With the flame of the Par-tay Candle now burning bright, the Vegas lights came on and the canned applause kicked in, which made sense since most of the audience members were plushy and could only make muffled beating noises with their widdle hands. 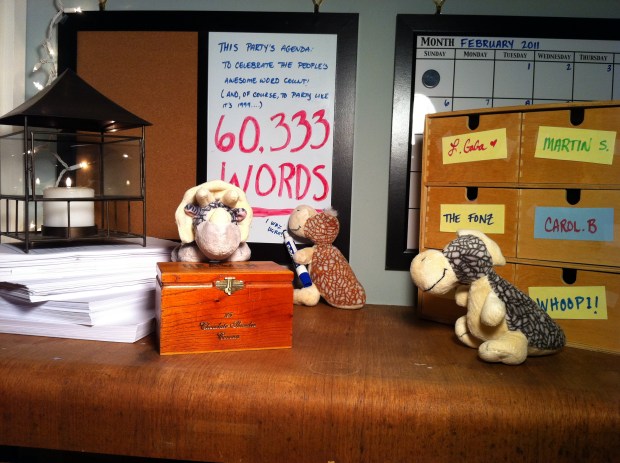 Tink, as Head Shaman and the only one with horns so nobody dares argue with him, stepped forward to make a speech...

“Dearly Beloved…(heehee)…ahem…we are gathered here tonight to honor and pay tribute to the hardworking boys and girls who have contributed to this tremendous offering.  The Muses have judged each of these 60,333 words and find them to be Par-tay worthy.  Funny thing about the Muses…”

[I told Tink that the tape-recorder gave up the ghost right about here, but the truth is, it was 2:00 in the morning and Tink is a long-standing member of the Dinosaur Filibuster Society…and a long-practiced one.  Thank goodness I woke up — er — the tape-recorder recovered in time to catch the end of his speech.]

“So in conclusion, the Muses extend their appreciation and gratitude for the words you helped bring into existence this month.  Their light grows strong and bright with your generous offering.  And out of our own appreciation and thanks for any old reason to par-tay, we each offer you dinosaur gifts.

“My gift is the gift of motivation.  If you guys don’t slam this month’s word count record into the ground, then we can’t have another par-tay, and I’m gonna come to your house and mismatch all your shoes.  Tough love works.  I’m just sayin’.”

[Wow.  I know.  Tink is such an amazing public speaker.  Tony Robbins, watch out for the little dinosaur!]

Next up to speak was Baby Dinosaur: 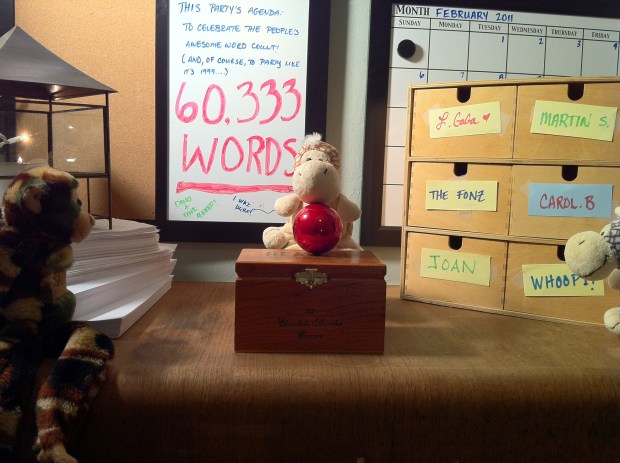 Baby Dinosaur foresees a bright future for every one of us.

“My gift is the gift of faith,” Baby Dinosaur squeaked.  “The smoke-filled mith-trees of time part for us to reveal a future bwight and pwomising.  Your words will never be wasted.  Is it time to eat yet?”

[There was a resounding “No!” from the audience, which I thought was a little unfair…except for the monkey, who shouted, “Hell to the yeah!”  Or maybe that was me.]

Next up was Dada Dinosaur: 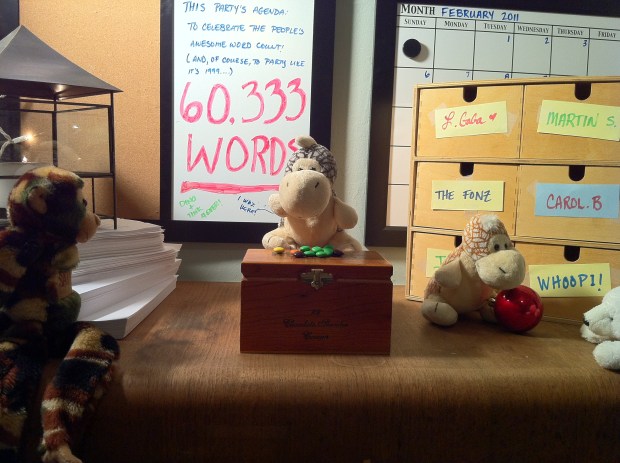 “My gift to you,” he says, “is M&Ms, lots of M&Ms.  May they fuel your late-night efforts and sweeten your disposition.”

[He looked like he wanted to say more, but Dada Dinosaur is typically a dinosaur of few words.  Of course, the monkey made a move for one of the M&Ms and Dada had to make a dive tackle to get it back, so that might be why his speech was a little brief.]

Directly following the Giving of the Gifts, audience members and fellow plushy colleagues jumped up on the dais for a traditional game of Hollywood Squares.  [I know, there’s not enough squares, but there’s no talking to them.] 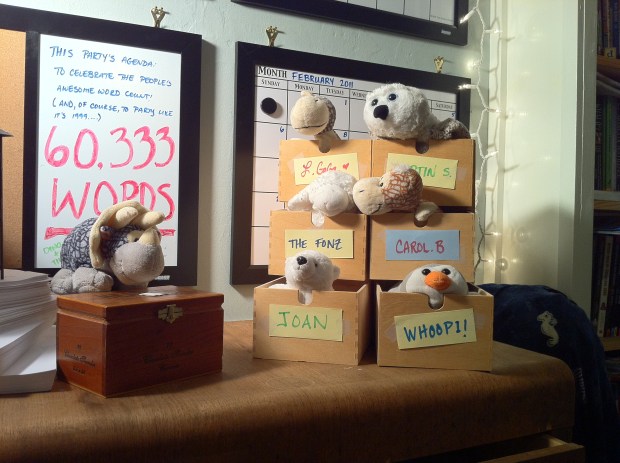 Surprisingly, it was The Fonz who fell asleep first.

After a very extended game of Hollywood Squares, of which there was no clear-cut winner, only a few recommendations, the rest of the plushy gang split when the dinosaurs launched into the traditional dinosaur par-tay game of valor, Push-Pin Jousting, which looked a whole lot like Push the Pin in the Dinosaur’s Heinie to me.  Dinosaur humor escapes me. 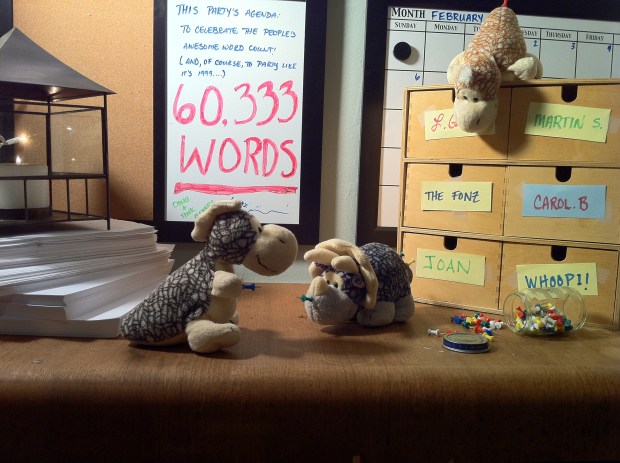 After accidentally sitting on his weapon and “scratching” his game, Baby Dinosaur watched from the sidelines as Dada Dinosaur showed him how it was done.

Then it was time for a little Vegas-style gambling.  Tink and Dada got pretty competitive, but Baby ended up eating all of her “chips” and had to go to bed with a tummy ache, which was fine because it was waaay past her bedtime. 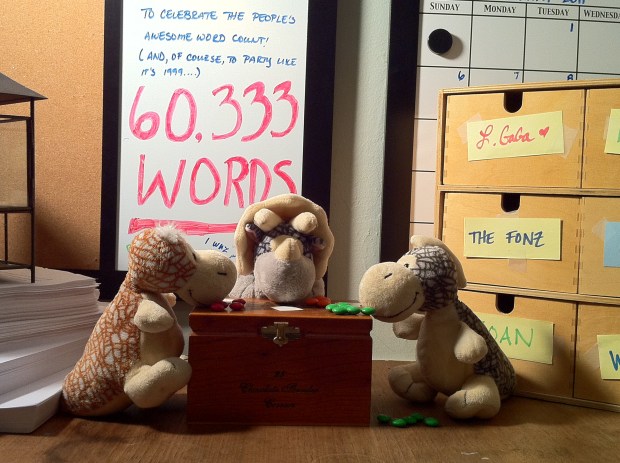 At this point, Tink and Dada became locked in a battle of wills, engaging in the Whoever-Blinks-First-is-a-Primordial-Throwback-that-Came-Way-Before-the-Egg.  They are very good at this game.

After an hour, I thought it safe to join the Toddler and Baby Dinosaur in bed as it was getting cold sitting there on the wood floor and Dada and Tink wouldn’t share any of their M&Ms.

When I woke up the next day, Dada was missing, and I found Tink like this: 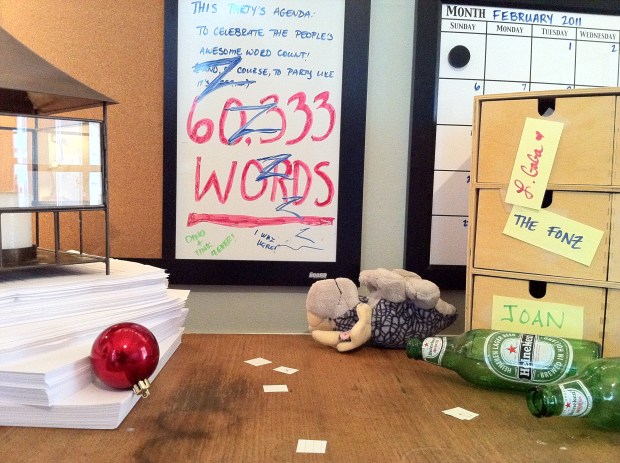 You’re probably wondering about the beer.  I don’t give them beer.  They steal it.  But if you’re worried that they’re getting drunk under the legal age limit (they’re only 2 years old), don’t.  They’re not drinking.  I’m not entirely sure what they do with it — I think they may be bathing in it — but it kind of makes me mad that they waste good beer.  I have to hide that stuff in the back of the fridge.

When I woke Tink, he stretched with a huge groan, flipped over onto his little dinosaur feet, and said, “That was one sweet par-tay.  We need to get a fog machine.”  And then he trundled off to bed.

I later found Dada Dinosaur inside my guitar with Lambie aka The Fonz, with no reasonable explanation for how they got there or what exactly they were doing in there.  I decided I don’t need to know this.

All in all, not a bad party.  Clean-up was relatively minimal, and no one had to use any of the little wastebaskets I set out…always a good thing.  Good times. 🙂

Thank you again to everyone who contributed to February’s word count pile.  I hope you’ll join us for next month’s challenge.  The higher the word count goes, the dinosaurs promise me, the wilder and more lavish the parties will become.  They don’t have any money or credit cards, so I’m not entirely sure how they’re gonna finagle a fog machine, but if there’s one thing I’ve learned, it’s never to underestimate a dinosaur.

12 thoughts on “THE SECRET, NEVER-BEFORE-PHOTOGRAPHED CELEBRATORY RITUAL OF HOUSEHOLD DINOSAURS IN HONOR OF YOU”