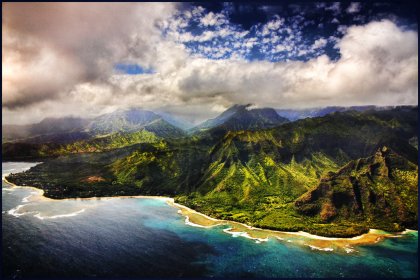 THE VIEW FROM WHERE I'M FLYING ~ "Bird's Eye View of Kauai" by kimjew @ deviantART.com

I concede.  I admit it.  Summer is over.  The pomegranates are hanging low and fat, the local pumpkin fields are dotted with orange, and we are wearing socks on a regular basis.

I’m sad to see this summer pass.  Maybe that’s why I’m still surprised it’s cold outside and haven’t yet started on the Pupster’s Halloween costume.  Talk about long, endless summers.

I imagine we all have those summers in our lives that stand up to the rigors of time and imperfection of memory…the summer that we had our first kiss, the last summer before high school, summers where we arrive at the Labor Day barbecue somehow changed, grown up, more worldly and more forgiving.

This has been my summer.  This was the first summer of my marriage that I’ve been apart from my husband.  And so while Fat Cat was off in the Army working hard for the family, I was at home…alone with the baby.

Except for the Evil Faux-But-Incredibly-Similar-To-Death virus that Fat Cat brought home to the Labor Day festivities (thanks, hon), it really was a piece of cake.  I handled things like a pro — in large part due to incredible parents who will drop everything if I ask for help…even if it means exposing themselves to the EFBISTD virus.  But even considering the amazing support of my family and friends, I feel really proud of how I’ve done on my own these past few months.

So, anyway, I’ve been thinking about writing this blog post for a long time, probably most of the summer.  I’ve been searching for that one perfect morsel of English language to describe my summer.  I’ve been chasing it for the last few months, and it’s almost on the tip of my tongue….

Anyway, I haven’t found it yet.  But I finally had to write this so that I can move on and tell you guys about all the other cool stuff I’ve been saving up for you.  I didn’t want to find myself sharing summer revelations in the middle of Christmas shopping season when everyone’s obsessed with trying to find out what list they’re on and trying to get to everyone on theirs.  It’s bad enough that Halloween’s almost here.  In just four days, I am expected to dress my child in a funny outfit and go door to door begging for handouts from my neighbors.  Yay!

So here I am, perfect-morsel-less, ready to accept that this post will have to be less than perfect (what?!), and that for now, my summer will have to retain its working title.  Better that we just move onward and upward.

And maybe that’s what my summer’s been about.  Onward and upward.  I feel like for the first time in my life, I’m completely facing forward, no need for a rear view mirror.  I feel like Buzz Lightyear, my fist raised high above my head, one leg bent just so, toes pointed fetchingly, of course…and I believe.  And so I am flying…and the view up here is breathtaking.

I don’t think I’ve ever been happier in my life.

True, I’ve missed Fat Cat, there was that horrible death virus, and the dogs caught waay too many possums¹ … but still, it was a great summer.  I like to think I showed up to the Labor Day barbecue somehow taller and more relaxed, maybe even a little younger and prettier.  For the moment, I get it.  I get all the funny and sad bits, I understand what it’s all about, and I am incredibly grateful.

There hasn’t been one definitive event that has found me in this altered state at the doorstep of Autumn.  More like a string of delightful stories probably only interesting to me.  But if there’s one thing I’ve learned, it’s that these little stories that make up our lives are the most important ones.

I learned how to drive nowhere, that it’s cool there are people out there who will mount giant chickens in their front yard, and that fresh-pressed apple cider tastes nothing like “apple juice.”

I learned that I can move at least two pallets of sod with a wheelbarrow on a low tire — confirming my long-time suspicion that I have superpowers².

I learned that you should always investigate meowing when it’s coming from your ceiling, that it’s more likely it’s a thirsty, trapped kitty than a supernatural being.

I learned that I don’t need nearly as much sleep as I used to.

I learned that one should always be packed for the beach.

I learned that I want to write more than I want to do anything else in this life, and that I was probably born like this.

I learned that there is a deep and wide swath that separates professionals from half-assers, and this chasm exists in every industry and shenanigan of our human tribe.  I also learned that more often than not, this separation between the cream and the cloudy water tends to forecast where to find the cool people.

I learned that I really want to be “cool people”…in a self-effacing, American-sweetheart meat-eating hippie kind of way.

I’ve learned that I’m the funniest person I know…and that the baby is well on her way to knocking me down to second funniest.

I’ve learned to watch what I say in front of the baby.

Most importantly, I learned that there really is no right way to live your life.  And now that I know, I’ve been having a lot more fun defining what I think a good³ life lived looks like.

Anyway, if you’re reading this far down, thank you for letting me share this with you.  It’s been a pleasure to write this post.  I think so far this has been my most favorite summer yet.

What was your best summer?

¹ Why don’t they run, for crying out loud?  Playing dead does not work at my house.  My dogs are not fooled.

³ Incidentally, mine looks like a butt-dented denim couch with lots of crushed goldfish crackers under the cushion.