It has taken many weeks and some celestial intervention (a fortune cookie told me organization would set me free), but my own workspace is now ready to ride in the Workspace Wednesday Parade.

My husband and I bought our house 10 years ago.  It’s a sweet little house, over 100 years old, with lots of quirks and character, including crazy tall ceilings and windows (which I love).  To call it a fixer-upper is probably an understatement.  It’s been more of a perpetual-fixer for us.  But Fat Cat rocks woodworking and home repairs, and so the house has really come a long way.  You have no idea.

This is my favorite room in the house: 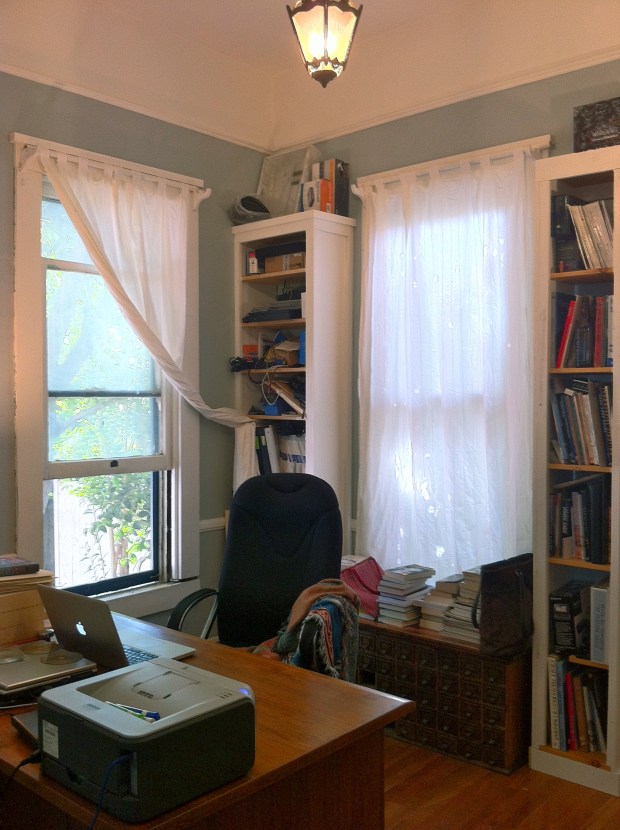 The window looks out into the backyard.  I can unhook the window screen and shoot spit wads at the cats…not that I do…very often.  Fat Cat built all of the bookshelves, which are awesome and, as you can see, packed.  I think eventually we’ll have to move to a bigger house for all the books.  Maybe one with a big yard, so they have a lot of space to roam around. 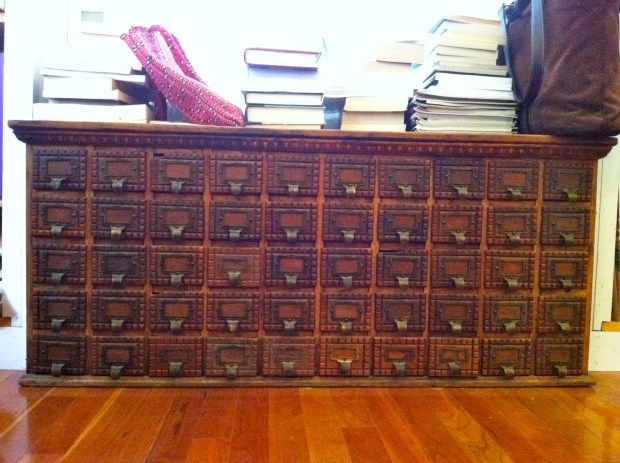 Wedged between two bookshelves behind my chair is this old card catalog Fat Cat and I bought years ago at a local thrift store.  It came from a local library and is at least 50 years old.  There used to be a couple of old cards in them with the library’s name and dates, but I’m not sure what happened to them.  I’m thinking the Toddler had something to do with it.  She loves to play with this thing.  I always find surprises in those little drawers.  I just checked and three of them have old Japanese postcards that the Toddler found and jammed in there. 🙂  Being an old library card catalog though, it only seems appropriate that it serve as a book bench.

This is the view from the doorway: 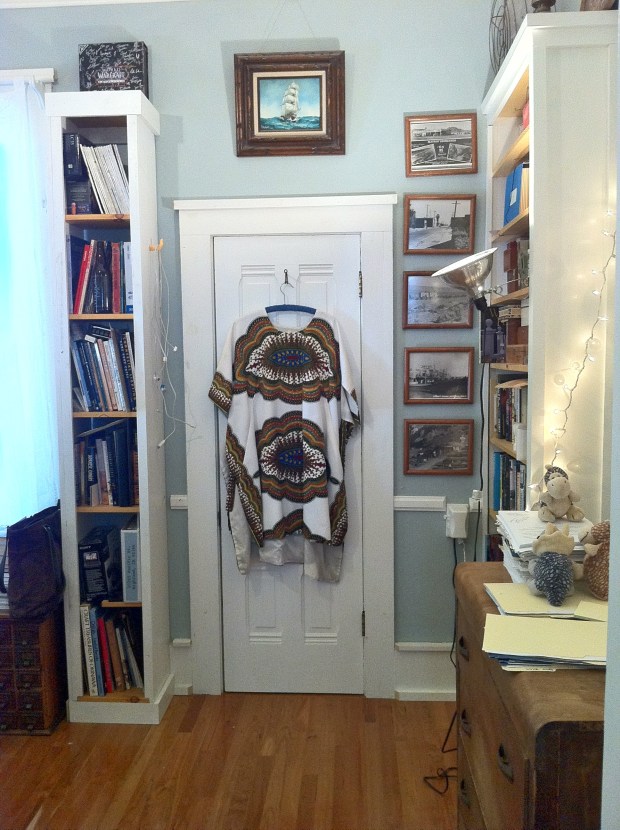 Fat Cat has a bunch of old black-and-white framed photos along the right side of the door, mostly of our local area.  There’s one of a wagon train crossing Death Valley.  The hippy tunic with the wild design came from my friend’s mom who passed away recently.  She was such a neat lady, and I can’t think of any reason why it should be put away.

On the side of the bookcase on the left is where I hang all of my cords.  Here’s a closer look: 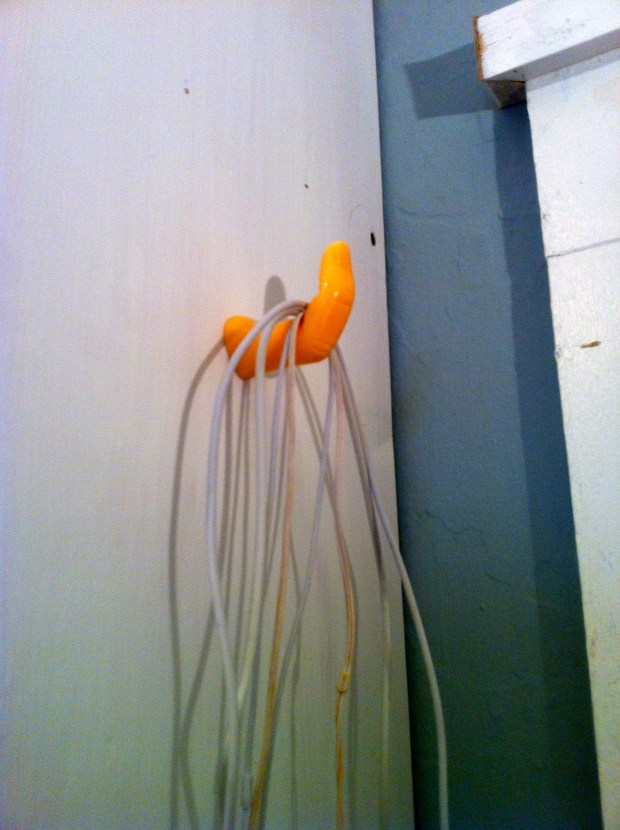 Another good friend of mine gave me this in a Christmas stocking.  Yep…he gave me the finger, but I’m not mad.  Look!  All my cords, wires, and headphones.  Now who rocks home improvement?  I installed this bad boy all by myself. 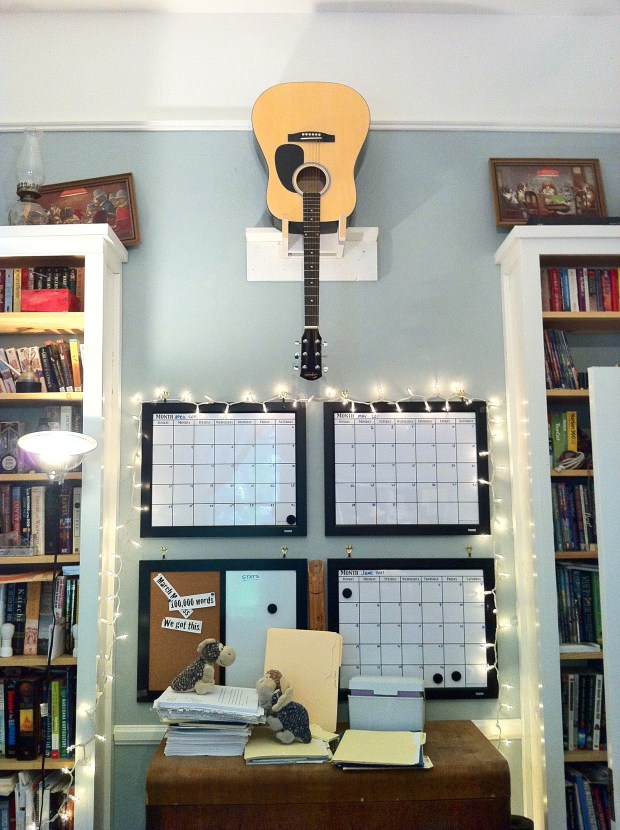 This is where the dinosaurs hang out.  They’re sitting on an old dresser that I use to store office supplies and the like.  The calendar white boards are from Target.  The Christmas lights I put up for the dinosaur party, and I liked them so much I left them.  They’re kind of nice at night.

The upside-down guitar is there because I’m never going to learn how to play it if I keep putting it back in its cover and storing it in the closet.  Fat Cat originally installed the wood display support for an antique wood sled that took up most of that wall, but it holds a guitar even better.

The pictures of the dogs playing poker on top of the shelves are Fat Cat’s.  I just wanted to be clear about that.

Here’s the view standing by the hippy muumuu: 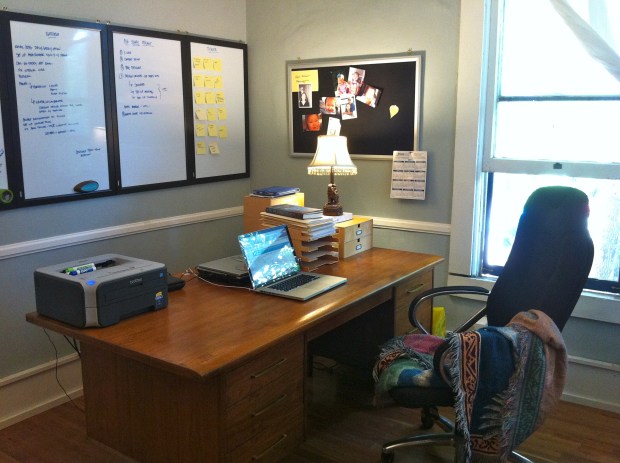 I may have to put this one in the photo album because I don’t know if I’ll ever see it this clean again.  I am elbow-deep in cut-and-paste story notes as I type this.  And I just have to note, if you have wall space for white boards, get them.  I love, love, love my whiteboards.  It’s like having a desktop space on your wall. 🙂

The desk is my favorite piece of the whole office.  It was restored by Frank, this old guy who used to have an antique office furniture place just down the street.  When I bought it, I didn’t have a truck, and it seemed like such a hassle to go borrow one when I literally lived a stone’s throw away.  So my sister-in-law, who’s all kinds of awesome, helped me push this thing up the street on a couple of furniture dollies and wrestle it into the house and into the office.  Not an easy feat, but she is freakishly strong for such a small person.  I can’t remember now where Fat Cat was during all of this, but he was appropriately impressed by our efforts.

Now, the next shot is only for context for the last shot.  This is behind my desk. 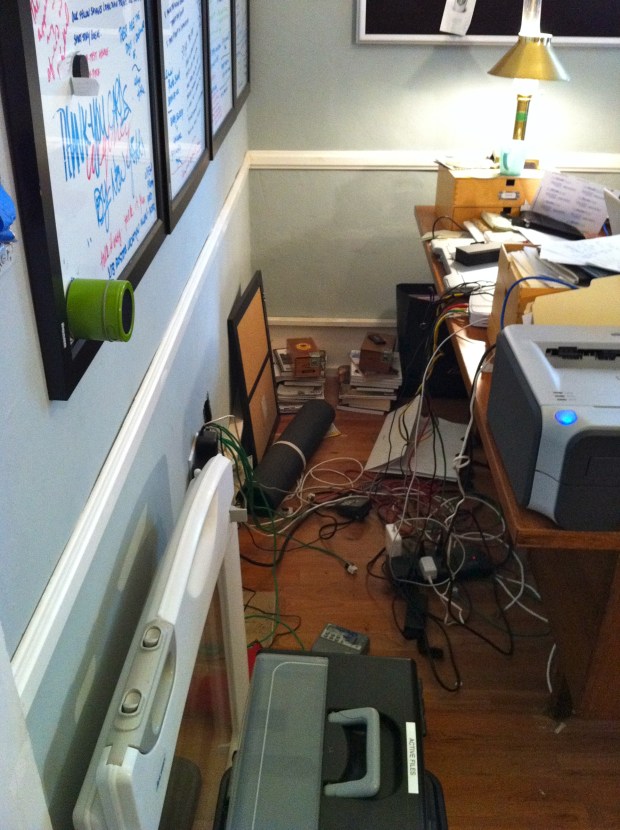 I mean, that was behind my desk.  This is what it looks like now.  And believe me, this was not an easy task…so oohs and ahs are encouraged. 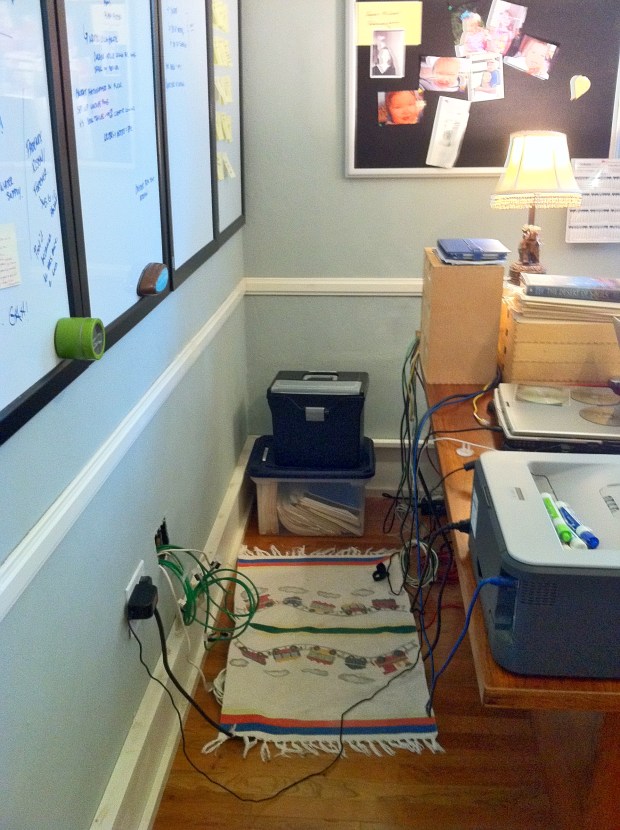 Not only is it safer and cleaner, but I now have easy access to my whiteboards.  Yay!  Makes it so much easier to outline my plan to take over the world.

Anyway, this is my spot.  I hope you enjoyed the tour.

And as always, anyone who would like to have their workspace featured, drop me a line in the comments.  I’m trying to do this every Wednesday, and I’m looking for workspaces of all creative types, not just writers.  So…clean up your room and take some pics!

One thought on “WORKSPACE WEDNESDAY”