A naked hula hoop is not much to look at. This lady used to be neon-rainbow-striped with a spiral of glitter in between. The look served her well for many years, but like all favorite outfits, it eventually sprouted loose threads and wore thin on the elbows. It was finally time for new tape! Yay!

I had been waiting for this moment ever since my sis-in-law Em got me this fantastic box of hula hoop tape. This hula hoop has been with me since I took a Hoopnotica class circa 2005 (!), and the tape lasted forever!

For this first attempt, I turned to Lara Eastburn’s handy “Five Simple Tips for Taping a Hoop.”

(Thankyouthankyouthankyou for the tip about working with shorter strips for the vinyl-backed holographic tapes…that prevented an unfortunate scene. 🙂 ) 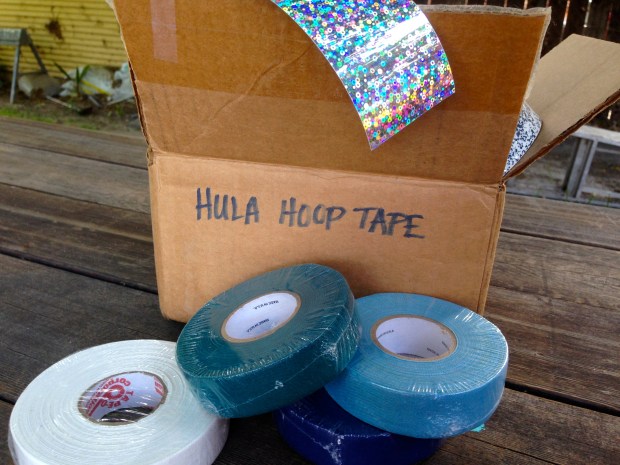 I got interested in hooping at the same time I discovered belly dancing —  and all that can be traced back to the first and, thus far, only rave I have ever attended. The rave itself deserves its own blog post someday, but I can tell you, there was a moment of magic that evening where the music was so thick and velvety in the air and the only things that were real were the belly dancers and hula hoopers on stage, digital angels in stammering light who floated through and between the music like surfers on an electronic tide. It was life-changing.

I must have looked like a little kid with stars in her eyes. I was so completely enchanted. All I could think was,

I found a class, but not surprisingly, I couldn’t get anyone to drive out to Hollywood to take it with me — which I totally understood. It’s a bit of a drive. I realized if I wanted to learn, I was going to have to go it alone. It was kind of a turning point for me. Believe it or not — don’t laugh — I was pretty shy — shut up, guys! — and the idea of taking any sort of class on my own was scary. It’s always easier and safer with a friend.

But I really, really wanted to learn how to surf the light fantastic like those girls, eyes closed in zen-like bliss, hoops orbiting up and down their dancing bodies like spinning light. So I screwed my courage to the sticking place, signed up, and drove myself to Hollywood. 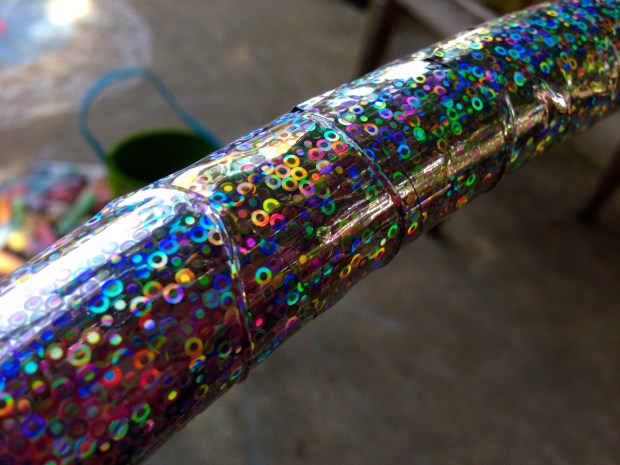 The weekly Sunday classes were held in an old dance studio on the second floor in the heart of Hollywood. It was on a busy street amid mean-looking buildings. Arriving students wheeled hoops of glitter up the sidewalk, a festive contrast to the cement landscape. The class space wasn’t the largest, so we had to be careful not to knock into each other. And you really had to be on the lookout for hoops that got away from their owners lest your head be taken off.

This was all set to the groovy, electronic twangs of Buddha Bar, take your pick on which album — there are lots, and they’re all good. This type of music casts a spell like a good haze, transporting everything in its sonic radius to a higher level. When I would finally relax, I would get those tasty little moments where I’d slip into the rhythm of the music and forgot I was trying to master the hoop. Total lost-in-the-moment zen.

I was doing it! I was catching a wave!

Part of me thrilled at the very notion that classes like this even existed. The other part thrilled at the disbelief that I was there actually doing it. Up until around this time in my life, all decisions were to be weighed heavily against the gold standard of practicality. Yet, here I was, driving an extra three hours a week in addition to my 20-hour work commute to take a hula hoop class!

There was no justifying this. Circus skills are not high on the practicality scale…at least not in the current position I held as a civil court reporter. This wasn’t something that was going to go on my résumé. I didn’t even have plans to attend hula hoop events.

For once, I didn’t care. I just wanted to learn. I wanted to know what it was like to feel the music and dance with the hoop and simply enjoy it. 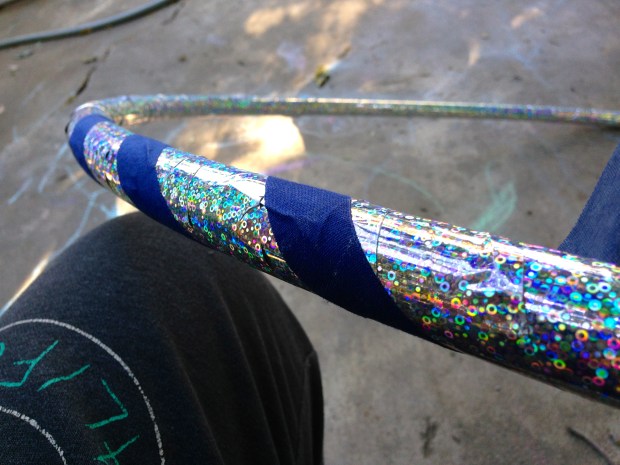 There was a tiny Japanese girl in the class that I was friendly with. She was supposed to be in the U.S. going to college, but she had fallen in love with the rave and club scene — and no, her mom didn’t know what she was up to or that she didn’t plan on returning to Japan. But she didn’t seem worried. It would all work out, she assured me with an cheerful certainty I couldn’t help but admire. I liked her a lot. She got really good too. I saw pictures of her later on MySpace in full rave angel regalia doing her thing. She looked fabulous. And happy as hell.

I’ll be honest. I never did get very good. I learned all the basics. I can spin it from my thighs up to my shoulders, neck, and then above my head and back, but that’s about it. Once it drops to my knees, it’s a frantic unflattering shimmy to get it back up, if I can. I used to be able to spin it on my hands and jump through horizontally, and a couple of other neat tricks, but it’s been a while. And it’s okay. I still have fun.

Naturally, I took everything I learned at Hoopnotica and tried to infect my friends with it. And one friend, Murphy, took to it. Took to it enough that he soon had made several hula hoops that could usually be found in the back of his truck, including one that was taller than we were. That one was fun to spin. There were even a few iterations of a DIY fire hoop that didn’t kill anyone, not that a hearty effort wasn’t put forth. And we often dueled with our hoops. Ow.

That was when we owned the bar. So many happy smoke breaks were spent in the back parking lot goofing off with hula hoops and just having fun. I miss those days.

Murphy eventually moved up north to see what he could see, and quickly discovered that all that hooping and all those belly dance shows I dragged him to meant that he easily slipped into the local culture of full moon parties, dreadlocks on everyone, and workers standing in front of Home Depot holding cardboard signs with scissors on them. He reports that it’s very nice up there.

It’s been years now since I took that class, but I haven’t forgotten the most important lesson it taught me: 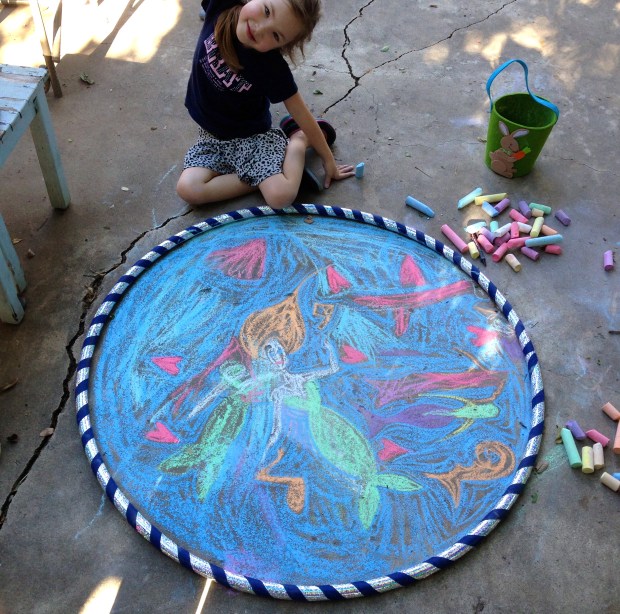 A pretty hula hoop will bring you mermaids.