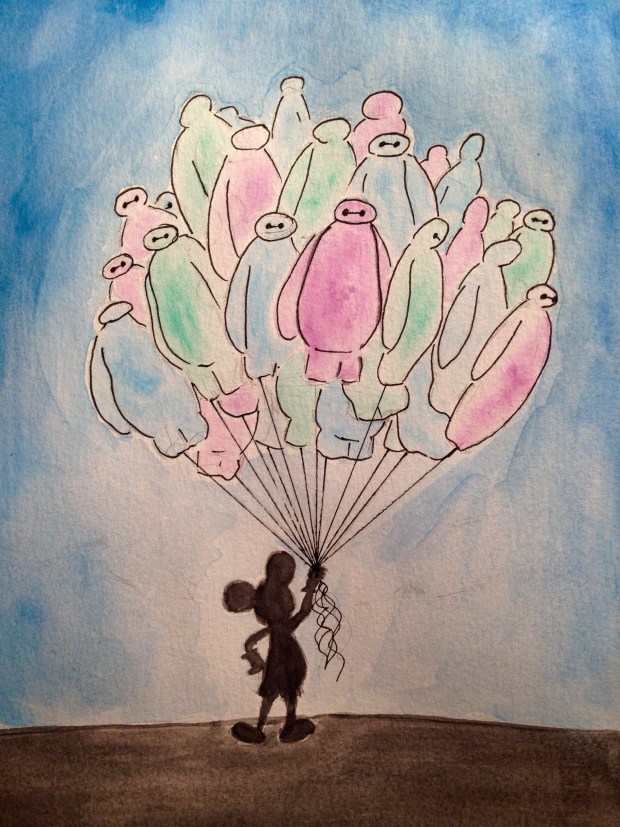 When I was in elementary school, I read a biography about Walt Disney. I don’t remember much about it except the part where Disney traveled by train to California, broke, with a cardboard suitcase, and how there once was a real mouse.

I was smitten with Walt Disney. After all, I learned how to read as a little one when my dad would fall asleep reading Donald Duck comics to me. I was always on the alert for a Disney animated short on television. I loved the comics, the art, the movies, the characters. Growing up then, in an era where there were just a few television channels, a few studios, a very limited number of creators reaching the mass market — unlike today, where multitudes of creators and channels and studios are all out there making noise and entertaining their own little sector of the universe — Disney was an Institution. At least in this little kid’s world. I always had the impression that Disney meant quality. They didn’t run the cartoons on TV often enough, but when they did, it was always worth it.

My family is from Southern California. Disneyland is a fixture in the landscape of my childhood. You can see me grow up in a succession of faded photos standing with my cousins in front of Sleeping Beauty’s castle, becoming taller and less frilly each passing year. My high school grad night was spent at Disneyland. It was a rite of passage, running around all night in the Magic Kingdom dressed in heels and fancy clothes, giggling in line with your friends.

Anytime anyone around here has some cause to celebrate, someone will invariably cry out, “What are you gonna do now?” And they’ll shout back, “I’m going to Disneyland! Whoo hoo!”

Of course, things have changed. I remember a time when locals paid $25 to gain entrance to the Magic Kingdom. (That’s a nice story, Grandma!) Now things are a little different. Tickets are basically $100 a pop. Ouch, right?

But it’s worth every penny. Let me tell you why.

You see, Disneyland has now become an important part in the landscape of my own daughter’s childhood. My little girl starts every other sentence with, “Imagine if…” “Imagine if we had cat faces.” “Imagine if we could fly.” “Imagine if the cat could talk to us.” (She leans towards the feline despite my strict dog-person upbringing.)

Disneyland is like a place imagined come to life. It’s become an even more incredible experience for me as a parent than it was to me as a child. Since my little girl was three years old, we have celebrated hers and her best friend’s birthdays at Disneyland. It’s become a beloved tradition, and they look forward to it every year.

This year we went in October, on little RaRa’s 7th birthday. It was a good time…unfortunately, we didn’t check the schedule and didn’t realize the main park closed at 6:00 p.m. for a special Halloween event, which accounted for a heavy crowd throughout the day. We also missed the notification at the gate regarding the early closing time of Toon Town. That was unfortunate.

Worse, we were running late in leaving (my fault) that morning and didn’t have time to stop at Lee’s to pick up sandwiches. No bueno.

We ran the course based on line waits, resulting in us crisscrossing the park several times. We got to Toon Town early in the day — it was all the girls really cared about — but we told them, no, we’d do Toon Town at the end, before it was time to go.

As you probably guessed, by the time we went back, Toon Town was closed. Tears happened. Adults felt bad. We squeezed in a visit to the Tiki Tiki Room on our way out. “Next year,” we told them. “Next year.”

I mentioned the story to my sis-in-law, a former Disney employee, who pulled some strings with an old friend. Long story short, this old friend got us in for free as part of her employee benefits, selflessly coming in on her day off to sign us in. (Thank you, J!)

It was a perfect day.

It was last Monday. We arrived early with four Lee’s sandwiches and the perfect combination of layers. It sprinkled here and there, but never rained. The sky was blue, the clouds perfectly puffy, and the temperature perfect there in Anaheim. Disney couldn’t have engineered the weather better themselves.

We took our time and visited all the rides and attractions we missed back in October. We also took in the Frozen show. We had front row seats. The kids got to sit right up front on the floor on little kid rugs. I had a cup of impressive joe that they sell in front of the castle. It was a perfect set-up.

And then the show started. It was so good that Tatiana (RaRa’s mum) and I cried. It was funny, it was moving, it was incredible! The actors played their roles like they were up for the Oscars. The best of the best.

The rest of the day passed in relative harmony. We spent a good long while in Toon Town, letting the girls explore the cartoon curves of cartoon houses. We wandered up, over, and back down Tarzan’s Treehouse. (I remembered when it used to belong to the Swiss Family Robinson and reminded me I wanted to ride an ostrich someday.) We just took our time. The crowds were light, the lines short. As always, the pasta at the Pizza Port in Tomorrowland was delicious…and supplemented our Vietnamese sandwiches from Lee’s quite nicely.

We ended up at the train station by Main Street by the time things geared up for the Paint the Night parade. We had a view from the mezzanine level with the tops of passing kaleidoscopic floats. The parade was preceded by the balloon and neon light vendors, spinning their glowing wares as they danced down the course.

The music was lively, catchy, filling up the air with excitement and fun as the parade began. Wonder after wonder passed by us, presided over by princesses, accompanied by synchronized dancers spinning jellyfish umbrellas that sparkled with brilliant neon light.

I looked over at Tatiana. She was crying too.

Then came the fireworks show. Synchronized. To music. Accompanied by moving pictures projected onto the buildings of Main Street that narrated a story of imagination and triumph and swelled our hearts with joy. What we must have looked like to aliens, this strange gathering of humans, our faces lit up by the lights in the sky. And when the air suddenly filled with cinnamon-scented snow, instantly, all the little hands of children shot up into the air, palms outstretched, eager to catch a snowflake.

As our unseen narrator wrapped up the fireworks show, he reminded us from the speakers above Walt Disney’s sentiments about one of his greatest achievements: “Disneyland will never be completed. It will continue to grow as long as there is imagination left in the world. I only hope that we don’t lose sight of one thing — that it was all started by a mouse.”

Tatiana told me later that she was so grateful to be able to experience Disneyland. She hails from Cuba. Had she stayed there, she told me, she would have never had the good fortune to witness something so beautiful as the things we had seen that day.

I am grateful too. 🙂