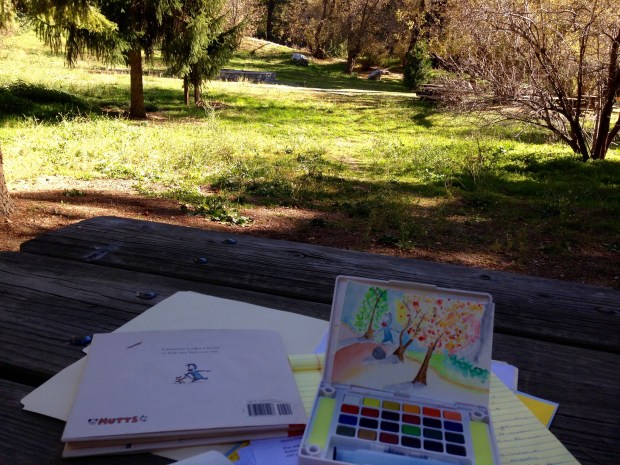 So far, this month has been packed with day job and other life concerns, typical for the month of November, but I finally found myself with a day dedicated to just working on NaNoWriMo, and so I fled to the woods.

You see, I’ve been in a sort of holding pattern with my story as I’ve been working out the answers to Big Questions that Really Should Be Answered Before One Embarks on a Novel. It’s been going well, I must say. I’ve discovered what happens in Episode 5 and who’s behind the whole mess; a character I killed off at the end of Episode 1 turned out not to be so dead, so that was a relief; and an idea for a sequel series has been lurking around the house. I’ve been keeping it away from the computer with my Nerf gun, but it is tenacious and I fear the second I turn my back, I’ll be outlining 10 books down the queue.

The rest of the story still lies cloaked in the Darkness of Unknowing. I’m sure that’ll all work itself out, right?

I know what you’re thinking: First of all, hello! It’s Day 20. How are you going to finish up NaNoWriMo if you’re prancing around in the woods? (Actually, I don’t prance. I just have a very specific gait….) You’ve got 10 days left, honey, and you don’t even know where you’re going!

But there’s sound reasoning behind my escape into the hills. Sometimes in order to figure out where you’re going, you gotta make an effort to get away from the noise of everyday life and go sit in the woods and paint pictures. Get your bearings, son! 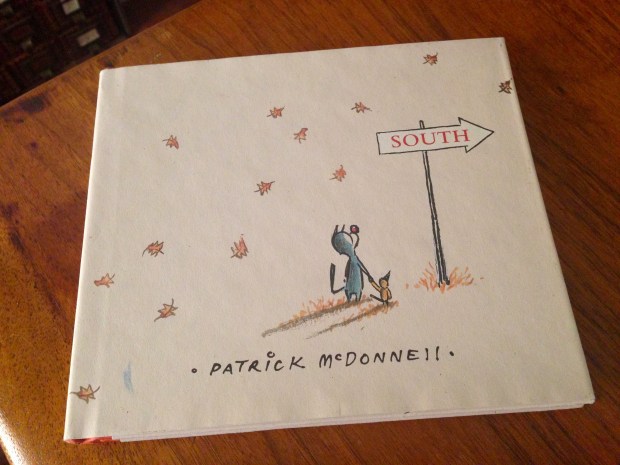 (Also, I was excited to try out my new travel watercolor kit, which I have to say is quite marvelous. I’ll have to remember to show it off sometime. The water paintbrush it comes with is brilliant.)

Whilst I was out there in the forest pondering the twists and turns of the plot macchinations of my brainses and painting cute cartoon animals, I was still acutely aware of the ticking of time. Still, my word count hangs around 12,000 words. Time is slipping away.

But I wasn’t worried because I had brought my new friend, Dragon Naturally Speaking. We’re still trying to work out a better name for her…but anyhoo, speech-to-text transcription has long been something very interesting to me, especially as a court reporter, and with so many people on Writers’ Cafe crying out their word counts in ecstasy, I decided I would take the plunge.

By this point, I had just barely gotten DNS installed and trained through the basic introductory dictations. My initial tests proved it to be very promising software. But I was ready to take it out on a field test. Being able to get my work done while traipsing around the woods on a week day is my current vocational goal. This little foray into the woods was going to demonstrate how feasible this goal really is.

After spending a very peaceful afternoon coaxing plot bunnies into place and playing with my watercolors, I hiked back to my car, which was  uphill, 11 minutes. I dictated on the way, huffing and puffing. That yielded later on, after I processed the audio on my computer, a whopping 2,559 words (including the hi-great-weather-we’re-having exchange I had with another hiker on the trail)!

I also dictated while driving from the parking lot back to my house, approximately 43 minutes, just working out story lines from my project. That yielded another 6,132 words.

The transcription isn’t perfect by any stretch, but wowza! I expect diligent training will eventually get this very clean. It’s very similar to how I “train” my steno machine transcription software, only the database is matching audio to definitions instead of keyboard strokes. It will probably take me a good couple of weeks to get reliably clean copy, but this is huge! I will be sure to post my results as I go along.

If this works out, I will be playing in the woods every day. 🙂 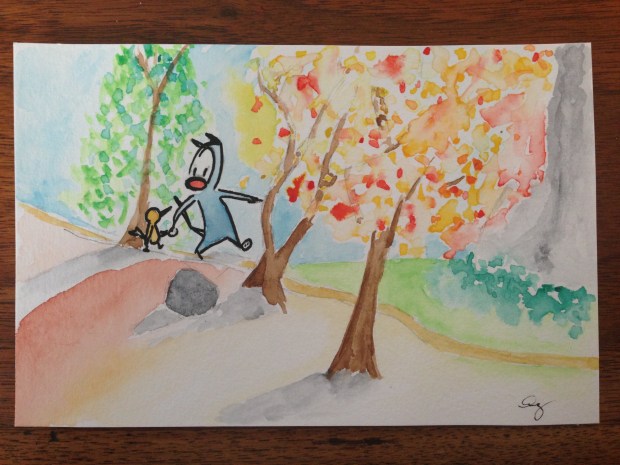